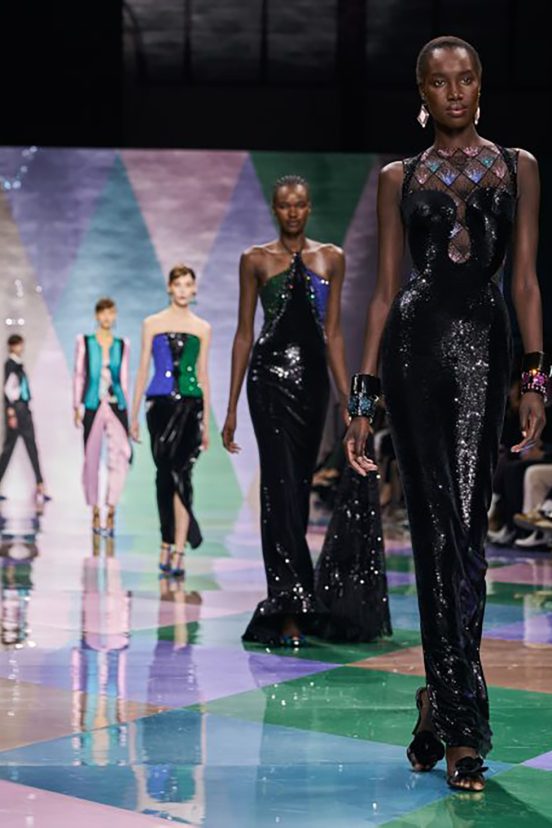 There were seventy-seven looks for Armani Prive, but the seventy-seventh look stole the show. Mr. Armani, the maestro, came to greet and applaud at the presentation’s close. It was an emotional moment for all, and he received a standing ovation, and why not.

In our midst stood one of the masters and creators of modern couture; this Haute Couture collection will endure for time to come, just as the soundtrack – Vivaldi, The Four Seasons. Quintessentially classic with a depth of character that is as unforgettable as a good wine!

Considering the current economic climate and the road to sustainability, it may have been optional that seventy-six looks were presented, but this is an Armani Prive collection and, more than likely, each garment was one of a kind.

Held at the inspiring Garde Republican on the Boulevard Henri IV, Armani presented a collection of stunning silhouettes showcased to a different genre of the audience that we have witnessed thus far.

Armani’s consisted of well-heeled patrons who would appreciate and understand the type of clothes he creates. It was star-studded, including Michelle Yeoh, who brought movie-star glamour to Giorgio Armani Privé’s spring 2023 fashion show. The same day she was announced as the nominee for Best Actress at the 2023 Oscars, Everything Everywhere, All at Once.

Armani’s clothes are feminine and beguiling, sophisticated with a discreet element of subversiveness. His cut of the cloth defies scrutiny, and where bespoke patterning is concerned, Armani’s jackets are an Italian equivalent to Savile Row.

But beyond these accomplishments, today’s presentation was both intimate and symbolic. Set against a backdrop of harlequin-inspired shapes, the colors move away from the more discreet hues of the past. Nevertheless, they hold that aura of Armani femininity – shades of soft pink, mint, sage, lilac, and moss – contrasted against vibrant green and the quintessential season’s noir. The designs were transformed into oblique lines and blocks of Borealis colors, carving silhouettes into a unique expressive sequence of light and radiance.

The opening silhouettes bore much of Armani’s already established character – the satin trousers, and cropped jackets – yet each one came with its hand-touched identity. Armani never allows a silhouette/model to go out onto the catwalk without adjusting every detail himself. The soft shell pink contrasting against the black, parlayed with the harlequin patterns, which came in several versions of diamond-shaped cloque. Greens followed, predominantly in black combinations, but the shell pink’s femininity won hearts.

Fabrics flowed in deliberate antithesis with the models’ purposeful slow movement – as at Schiaparelli – giving the purveyor every opportunity to drink in the creative beauty – perhaps it replaces the old manner in which Haute couture garments were presented.  The shell apricot sheath was poetry in motion as it shimmered elegantly along the catwalk.

Another vignette showcased the Armani blues, played against a vivid sea green, and illustrated even further using satin. These unexpected colours glistened and sparkled and came to life in liquid silk, while the sequins underscored the sparkling antithesis of the shapes. The finale of languid black dresses was breathtaking. The finest of details showcasing the very nature of the feminine shoulders, exposed backs, and decollete; this was sophisticated sexiness at its penultimate. The final silhouette was breathtaking with its one-sleeve placement and double-layered sheer decollete. The diamond shape continues in laser-cut pieces, masterfully caught at the edges to create languid fluidity.

Armani’s outfits are never complete without the accessories, and even those were designed with acute attention to detail, coordinating with the diamond shapes – bracelets, earrings, and shoes.

Giorgio Armani transforms signs, lines, and colors into an original expressive trajectory, transcending the sense of time. He successfully emanates an atmosphere of lightness with the splendor of his finite tailoring and choice of the fabrics, observed in the liquid reflections and luminosity of satins and silks.

What was there not to love about this presentation? The applause was heartfelt and uplifting.