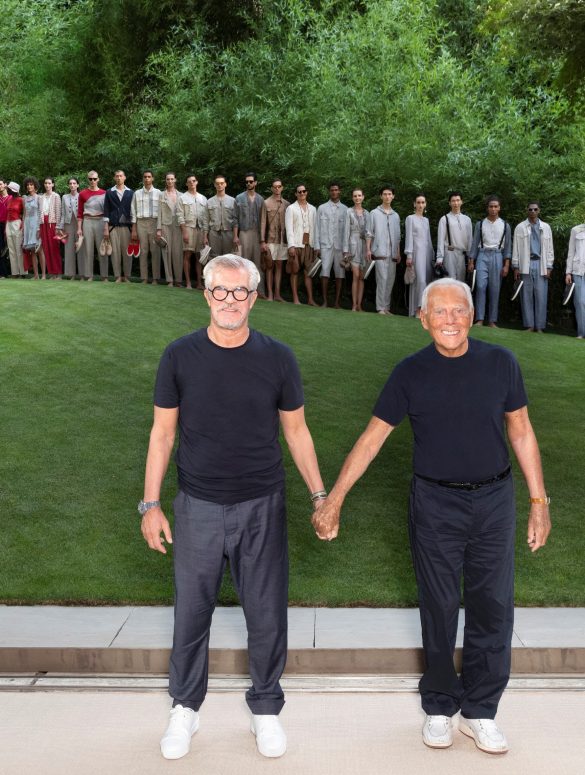 Back to Where It Started
For Giorgio Armani, The Meaning of Taking His Revolution in Menswear Back Home

Giorgio Armani coming home to show his men’s spring 2022 collection with two live shows to small audiences in the courtyard of his Milano home is not just an act of bravery.

It is a statement of his firm belief in all these years that home is where the heart is and that home is where he, his designs, and his company had started to conquer the fashion world and the world beyond that three decades ago.

Coming home is also a proud act of ownership.

For anyone who had come to Milano men’s or women’s shows in the mid-1990s, we will never forget going to the Armani show, either men’s or women’s or Emporio Armani in the basement of the via Borgonuovo office-home just behind the sprawling via Manzoni. There were always two shows. The second show was for the American fashion press corps in the decades before the Internet or the iPhone.

There were those rituals, getting into space, waiting for the show to start, and leaving up the staircase. Even then, these Armani shows were small as the underground theater space could only accommodate so many guests.

Then, the audience sat so close to the models walking on the platform at the smaller space than the Teatro via Bergognone.  Many of us could sense the show’s pacing itself, which the audience felt with familiarity. Models exited in small groups – either group of 2, 3, or even 6 to 8. Finally, the models came onto the runway, often close to each other, walking along within their designated members.

A few of us visited the designer to preview the shows, checking in while Mr. Armani conducted final fittings to ready the show ahead. More so, a few of us were invited after the presentations later in the evening when he would have us over upstairs at his home for dinner. Or, when the schedule was too hectic, there was always an invitation for a quick drink to catch up.

Back in those days in the mid-1990s, fashion felt different, more personal.

No matter whether the collection and the brand were considered avant-garde or more commercially mainstream, whether it was the trendiest or just the best cashmere coat available, fashion was much more personal in those decades. It was purely personal to the designers and personal for those who observe their work closely. And at Armani, this unique approach was always the prime directive.

Now, Giorgio Armani is returning to the home where he started as his brand Instagram stated in several teaser posts.

The designer has easily navigated the boundaries of men’s dressing, erasing much of the clear distinctions between more formal and more casual types of wardrobes. None of these three looks veer formal, and none are too simple. But these looks telegraph a man who understands a persistent way of dressing and perhaps too a new way of sartorial thinking in a slow but subtle way.

None of these three looks veer formal, and none are too casual. But these looks telegraph a man who understands a persistent way of dressing and perhaps too a new way of sartorial thinking in a slow but subtle way.

Over the past two decades, the nonchalant casualization of menswear has allowed luxury brands to partake in the streetwear movement. In this past decade alone, streetwear has helped high fashion marquee names sell extremely expensive sneakers, sweatshirts and compete with Nike and Adidas, for example, in the arena of logos fronted merchandise. This stomping of boundaries in menswear is one of Armani’s most significant contributions to menswear.

The idea of clothes-free from constrictions is pervasive and permeates each of the looks from this spring collection. A white zippered blouson with short cotton pants or a white vest with pleated pants represents this prevailing mood of simple clothes with little necessity for any excess. The new suits in all whites are more of hybrids of shirts as light as the single breast shirt-jacket with shirt sleeves or the mini lapel five buttons single breast jacket demonstrate the new definition of a suit.

No matter what, the suit remains the centerpiece of the men’s wardrobe. In the white segment and the navy pinstripe section at the end of this show, there are different versions of a combination of jacket/pant, shirt/pant, blouson/pant or vest/pant that can be considered as ‘suits.’ The suit is no longer just a formal jacket and a matching pants. The deconstruction of both formal and sporty sportswear leads to this lesser sharp divide. Indeed the choice of very light fabrics – silk nylon, linen, silk rayon, and lightweight cotton – allows for a more seamless edge. The lighter materials provide a solid foundation for softer shapes.

“Overall, the attitude is very light. We know a more relaxed way to dress this past year. The suit is no longer composed of a blazer and a pair of pants. The timeless and effortless style remains a valuable lesson,” Mr. Armani said after his second show in Milano.

But for the more a traditional suit – it can’t get any more classic than this – went under a minor sartorial surgery. The shape of the double breast is fitted at the waist, slightly flare out above the hips, and slightly shorter in length paired with cigarette pants. At the same time, there is plenty of knee-length Bermuda shorts here for the beach or the dinner party.

At the end of the second live show, Armani appeared at the end of the catwalk, together with Leo dell’Orco, the long-time menswear director who had been part of the company since 1977, for a joint bow. Again, it is a sign of high respect for the seamless operation of creativity at this independent giant.

See Collection
WHERE FASHION GETS CREATIVE
Press ESC to close