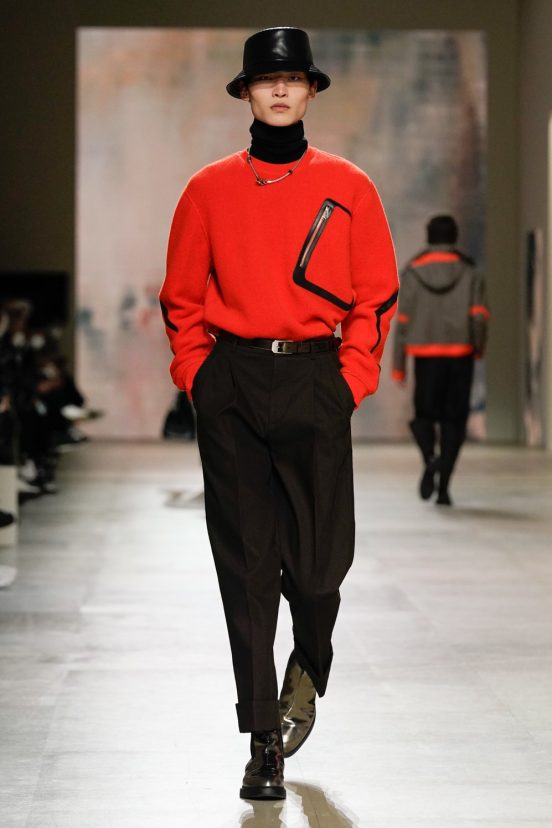 Adorned with real historical French tapestries as well as subtly distorted digital reproductions of them, the set design of Hermès’ Fall 2022 men’s show made strong use of its Mobiler National location, an administrative building that oversees the continued operation of two historic tapestry factories in France. This theme of historical craft thoughtfully melded with modern was present throughout the collection, in which longtime men’s creative director Véronique Nichanian continued her work in guiding the house steadily forward.

Functional outerwear defines the silhouettes of the collection. Parkas, bombers, and biker jackets are a more frequent sight than traditional tailoring, though the latter is present enough to uphold the feeling of contemporary dandyism. There is an emphasis on functional details and hybridity, with many of the pieces being reversible, and featuring hidden pockets, removable linings, and well deployed zippers. Looks were rounded out with quiet class by high-waisted pleated trousers.

With these functional and refined details, Nachanian displays an understanding of luxury that’s at least as much about how a piece can give itself to being incorporated into the motions of one’s life and thereby elevate it, as it is about the status of being seen wearing it.

While Hermès may still have a reputation of being primarily a leather goods house, those who have paid attention to Nachanian’s work for the brand – and there’s over thirty years of it – know that the designer can masterfully express her vision through an array of materials, and this collection was a particularly strong example of this versatility. Technical poplin, excessively soft shearling, waterproof cotton serge, wool knits and flannel, and crinkly (imitation) crocodile appeared alongside the buttery leathers.

The most direct reference to the tapestries was the color scheme of the first movement of looks: among the charcoal and cloudy off-white that permeated the collection, soft blue and yellow, pale red. These gentler shades were followed by, somewhat surprisingly, acid green and electric orange, with the palette calming back down to end on details of pale pink. The chrome-like, mirrored shine of the boots at once lent opulence, a subtle historical touch in their suggestion of gleaming bronze statues, and – something uncommon for Hermès – a dose of glam.

Despite the occasional peppy and youthful brightness (a youthfulness which was also embodied in the bucket hats – everyone is so tired of seeing them, but they keep selling, especially to kids looking for a way into luxury), the collection had that distinct air of quiet, confident refinement and touch of elitism that made it ooze Hermès.

Though perhaps not quite as strong as the sublime freshness of Nachanian’s previous showing for Spring 2022, it was another strong outing for the designer. The collection deftly incorporates a subtle but omnipresent sense of forward-thinking craftsmanship into an iconically classy and masculine sartorial personality.