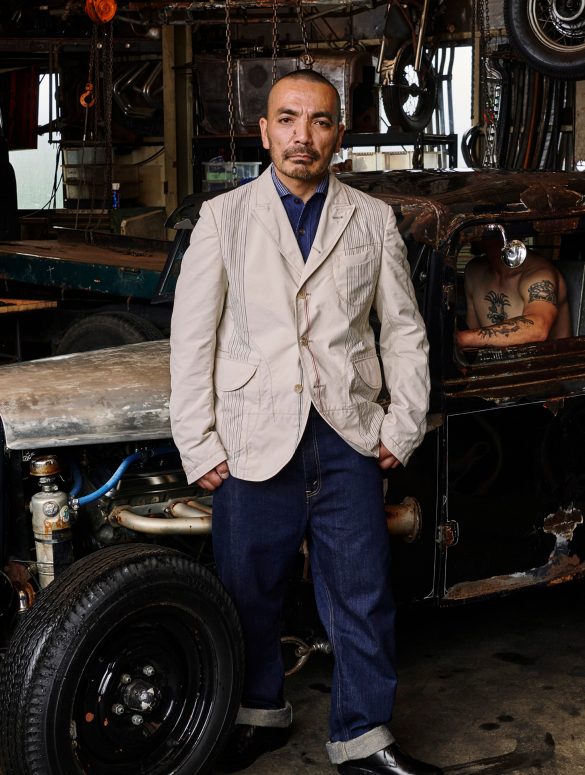 Collaborating with the Everyman

It’s not very much of a surprise that the Japanese designer Junya Watanabe has chosen a group of ordinary people who live and work around Tokyo and in the provinces – sushi chef, auto mechanic, artist, architect, DJ-producer, organ builder, swordsmith, or bar owner – as ‘models’ wearing his spring 2021 men’s collection photographed by Keizo Kitajimain around their respective places of work. At a time when a live show in Paris isn’t possible, Watanabe naturally turned to these real people instead of the male models the designer would have otherwise cast for the runway and ask them to pose wearing his new fashion clothes for an intended book.

“This season I found myself reflecting on the power of the books around me – precious items that I value, though I may not open them every day. Many of the pieces in this collection depict and introduce these books,” said Watanabe of his choice of the range of books – art, design, typography, and food – that inspired him.

But this book project for the men’s spring 2021 collection is not riddled with artistic disguises.  Instead, this project is actually about a new collaboration – this time not with any known brand but with the everyman that Watanabe sees as his customers in Japan and globally. It is brand Junya Watanabe teaming up with ordinary people instead of the regular formula of transforming the known ordinary garments from another brand into a Watanabe garment.

In nearly two decades of working with menswear, Watanabe has always chosen very specific brands and products to initiate a joint project, each time with a sharp focus on brands that produced functional garments geared more towards mass consumption and brands not necessarily in the crosswinds of luxury fashion. In his collaborative work with Levi’s in 2001, with Porter in 2004, with Converse in 2007, with Vanson in 2007, with Brook Brothers in 2009, with Hervier in 2012 and recently with The North, Face, Nike, Canada Goose, Carhartt, and ArkAir, Watanabe has been principally responsible for elevating ordinary and utilitarian garments made for the mass into specialized designer luxury products decades before collaborations become a standard in luxury fashion.

Watanabe is using the ‘everyman’ this season to show his classic clothes, showcasing all the pieces that are central of his concept and philosophy of fashion and his design ethos.

While remaining anonymous and unnamed, this season’s collaborating with the people who may wear the clothes rather than with any known brands isn’t any less important for the brand than say the work done with Levi’s or The North Face because the clothes are essential Watanabe staples being worn by these specific people.

The looks featured are friendly, familiar, and have been part of Watanabe’s fashion lexicon forever, and that’s why they are great clothes. Now, these clothes are portrayed here with the unintended consequences of rendering these well designed and meticulously made garments a bit more ordinary, perhaps erasing the word designer fashion from the looks.

Watanabe applies his innovative twists to wardrobe staples, overlaying patterns and fabrics to create a volume and add dimension on the surfaces of the garments themselves. This season the designer used traditional fabrics such as cotton and raw denim to present both a slim and relaxed silhouette such as the one-button raw denim single-breasted jacket with stitching on lapel worn by bonsai master Masashi Hirao, or the three-button patchwork jacket worn by architect Son Fujimoto or in the three-button light brown pantsuit with a color pattern lapel worn by organ builder Munetaka Yokota.

The grey striped short blouson and the multiple pocket jackets on the auto mechanics Takaya Waki and Akira Nakamura are part of the functional workwear basics that have been a key component of the designer’s essential wardrobe. Both the mixed cotton light brown knee-length coat on professional flyfisher Yutaro Sugisaka and the white wrinkle cotton coat on organ builder Munetaka Yokota recalled the waxed canvas Mac coat from the French brand Hervier Productions project from fall 2012. And the orange short blouson on the photographer Mikio Hasui has an inkling of the 2004 remake of the Porter rain jacket using gore-tex fabrics.

More importantly, this spring 2021 project has a feel of authenticity that is often lacking in the many fashion endeavors of this new fashion season working under duress.

Now, the designer who pioneered the art of fashion collaborations strikes a reverse pose with his brand clothes become the centerpieces of the joint team project. That he can do so is simply because the clothes shown on these real-life people are easily recognizable as a Junya Watanabe jacket or denim pants or coat without any further needs for deconstruction and reconstruction or logo for that matter.