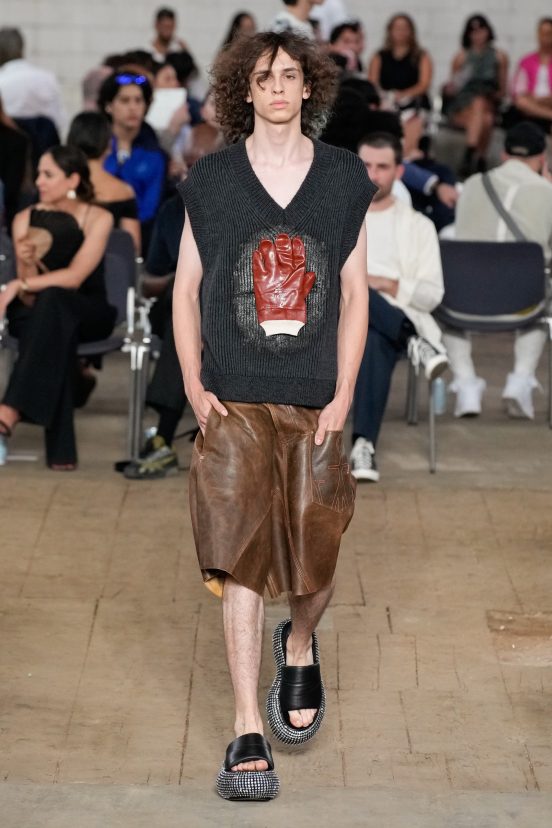 The Unhinged Genius of JW Anderson

Jonathan Andersons unique way around a surrealist theme continues to be unmatched. As one of the last shows on the Sunday schedule the British designer managed the almost impossible task of reviving an audience, flagging from a full day of shows and the mini heatwave that the city was experiencing, as the sets rugged industrial edge provided the perfect accompaniment to Andersons off-kilter twist on everyday objects.

As one of the few designers still experimenting with fashion which tows the fine line between unbridled creativity and commerciality, Anderson continues to push his signature brand of surrealism season-after-season

The mundanity of everyday objects was given a subversive twist, when seen through the lens of Andersons unabating desire to become fully immersed in his selected concept each season.  His play on the skate sub-culture permeating the collections, faced more into a nostalgia for boyhood pursuits, as skateboards were broken down and reformed to create hearts – which will be an interesting challenge for merchandisers at retail. While the handlebars of pushbikes – every young boys trusted mode of transport – became a clever, if not uncomfortable nod to the freedom they afforded a child in their youth.

As with his Italian counterparts, denim was a key focus, and made up a number of the best silhouette and surface experimentations from the collection. A double waistband detail was executed with finesse, so as to not veer into the world of gimmick, distressed denim that exposed an excess amount of skin at Dolce and Gabbana, was here constructed with ‘modesty’ panels – a smart way to appeal to a broader customer who wants the look sans underwear exposure.

The two-in-one denim-skirted slip dresses, that were shown here, but formed part of his Resort 2023 women’s offering, is sure to be the front-runner for best seller status, with the waiting list for pre-orders post-show certain to be filled by weeks end.

The designer could have edited out a yellow rubber sponge look, despite its alignment with the overall theme of re-imagining domestic products, it didn’t actually serve a greater purpose other than as a brief interlude between looks.  And the glove-cum-sleeve detail worked perfectly on a tri-colour sweater (evoking childhood memories of mittens sewn into coats), but again it remains to be seen how the rubber versions will fare at retail – perhaps an option would be for them to become detachable, offering the wearer a bonus in the addition of a top and accessory two-for-one.

The designers wildly popular clog shoe – that came about at just the right time, when the world was seeking comfort and ease – was given a makeover, with the replacement of the XXL gold chain with an equally bold nameplate, where its likely to only be a matter of time before the option of having said plate engraved becomes part of the brands offer. Across the collection, the newer additions to his growing accessories roster played into the nostalgia for all thing early noughties, as platform slides and shoulder bags bedazzled in oversized Swarovski crystals, while the soles of sneakers and worker boots got a bulbous makeover.

As an ode to childhood and domestic mundanity, Andersons Spring Summer 2023 collection was at once wearable and a comment on our obsession with consumerism, the irony being that the visceral excitement that these clothes will evoke, will only make his fans want to consume all-the-more.