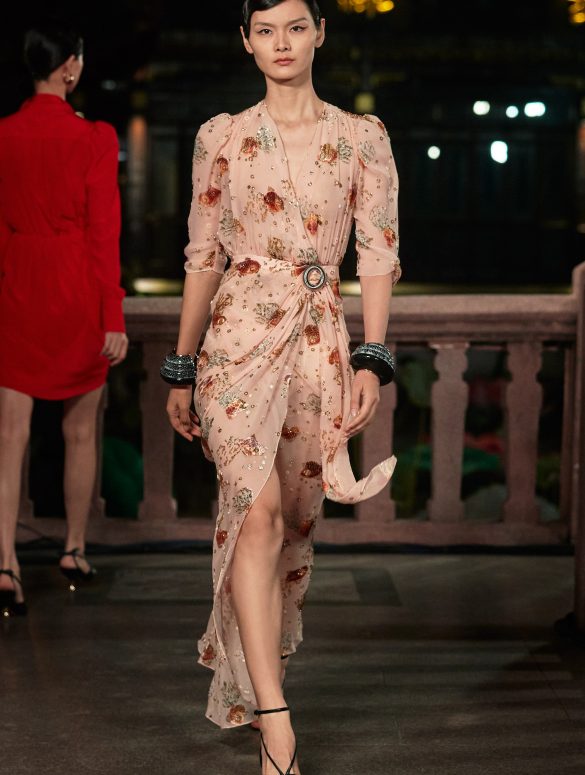 Nostalgia & Not The Now

On a late Saturday evening prior to the closing day of the Spring 2021 Shanghai Fashion Week edition that featured over 90 live runway fashion shows – a record for this unusual season – Lanvin staged the house’s spring co-ed show at the venerable and extensive Shanghai YuYuan gardens, located beside the Chenghuangmiao City Temple in the old Huangpu Qu section of this metropolitan city that is fast becoming, if not already, the next global fashion city on the international shows circuit.

After years of crisis both in the creative and business arenas, Lanvin came under the new majority ownership of Shanghai-based Fosun International in early 2018, and after a turbulent year hired the young French designer Bruno Sailelli who came from Loewe menswear with varied experiences through his passages at Balenciaga, Paco Rabanne, Alexander Wang, and Acne Studios.

Sailelli’s mission is to bridge the wide gap between the Lanvin of the 1920s and in the early aught to 2015 under Alber Elbaz – two distinctive creative periods of the house that have faded in the last few years, surpassed by the kind of fashion that favored street savviness and acumen rather than traditional fashion design.

In other words, Sailelli has to make the connection of Lanvin’s heritage past to an ever-changing audience in the present, while trying to guard elements of the traditions and DNA and somehow make them relevant to young people today.

Sialelli’s spring collection was a sure, studied homage to the value Jeanne Lanvin’s legacy and her fashion codes, especially the era of the 1920s, with his new spring clothes that recast the house’s famous robe de style – a straight line, slim-fitted dress in the torso with a bouffant wide and flared from the hips to the bottom with nods to the 18th century and the second Empire, and to Queen Victoria and Empress Eugenie, which were often adorned with intricate embroideries, ruffles, and even bows. Now Sialelli had also revived the 1920’s Art Deco elements from artists like Jean Dunand, whose lacquer foliage drawings graced the prints and jacquards of the embroidered dresses and shirts, and Armand Albert Rateau, whose furniture designs for the house founder now appeared as red and gold fish embroidered on a black tulle wrap blouse dress.

Mixing elements of these forgotten heritages in supposed juxtapositions of old and new, traditions and modernity, old house codes and DNAs of today, these once house-iconic high-waisted flared dresses recurred in this Shanghai show as a strapless floral embroidered dress or as a pink chiffon cinched-waist dress with silver details. The famous Lanvin bows like those that emanated from say the waist belt on a gold-embroidered dress from Spring 1923, or as a decorated beaded giant bow on a satin long gown from Spring 1926, are now reincarnated on a light yellow shirt with bow-tied collars under a yellow embroidered fine cashmere cardigan and pleated full trousers, or as pearls embroidered on a black cashmere cardigan paired with a black taffeta silk bubble long skirt.

Though Sialelli at times took the historical references too literally with little of his own interpretation such as the few opening looks, black and light yellow silk satin dress with the embroidered bows as a waist-hip built-in belt, or the deep v-neck silver crochet knit with tiered pink silk folded skirt – dresses that resembled exactly their past counterparts from Fall-Winter 1924-1925.

The show provided some pretty clothes from the tailoring to the soft chiffon beaded dress, even the men got an equal share of embellishments on a yellow-gold bead embroidered silk charmeuse shirt partially hidden under an ecru shawl-collared A-line double-breasted knee-length coat with matching shorts. The tailoring at times looked a bit stiff perhaps from the choice of the hard fabrics like the ecru wool double-breasted long coat or a dark blue double-breasted coat with gold buttons. And a few of the dresses seemed a bit overworked with full-on embroideries.

The menswear rested on sharp tailoring with the prominence of the clean-cut, either straight or slightly flare-shaped jackets and coats in single and double-breasted, paired with pleated, cigarette, or loose pants, or with shorts. The light brown single-breasted 2 button, 3-piece suit, and the brown leather round collared, single-breasted pea coat, and flat front pants were fine commercial examples for retailers.

This fashion voyage through space, time, and cultures seemed more a whiff of nostalgia – a great vehicle for a revival of the past and the heritage of this venerable French fashion house in need of a firm footing on the ground own heritage – than of current currency. The luxurious clothes did not on the whole look like real propositions for modern dressing now despite their mostly wearable features, especially today in an era of tumult.

Perhaps this quiet outing late on a Saturday night in Shanghai was more profitable and more purposeful to establish the business side of the brand rather than upping the fashion quotient. It was a sure bet of a major branding exercise as a sequence to the 130th Year exhibition Dialogues staged in December 2019 to commemorate the brand’s anniversary, as well as the opening of a new giant Shanghai flagship store designed by Dimore Studio based in Milan.

What was not achieved here was to recapture and to translate how that new mood expressed by the generation in the post World War I era where the environment of economic prosperity met an explosion of fashion-centric styles that propelled Lanvin’s fashion to the center of Parisian cultural life, can be a template for the moments of uncertainty today and importantly to the fashion aspirations of the youth today.

Heritage can be a hindrance, like the very heavy and colorful embroideries of floral patterns from old panel-room-divider lacquers now on the black strapless dresses posed on the bodies of the models, who carry the dresses around the zig-zag walkways of the YuYuan gardens.

That said, Jeanne Lanvin’s robe de style as she cut her dresses with the intentional feminine line and decorated them with embroideries, bows, and ribbons, was a counterpoint to the prevailing fashion aesthetics of her era – namely the rigidity of the flapper dresses and on the other spectrum the too-masculine look of the garçonne dresses, as well as the more minimalist and sporty styles of her contemporary Gabrielle Chanel. Perhaps looking under this light, this show could be seen as a guard post against too much realism in fashion today as a response to the pandemic crisis, sort of a last stand against the ‘casualization’ generation and the ‘sweatpants’ era now.

But Sialelli could have made a stronger statement with less adornment in this specific re-contextualization. There wasn’t very much originality in the execution of the clothes and above all, no risks and no assumptions of risks were taken. Perhaps in future collections, the designer can move forward creating a style for now in the way Alber Elbaz did, deploying just the spirit of the house but less so its fashion heritage. Contextualize now, not re-contextualize the past.

The appeal of this collection seemed geared towards an older clientele rather than a younger group of customers. For this younger generation, there are plenty to choose from with capsule collections, denim, sneakers, and much more casual apparel than the clothes in the fashion show. Showing in Shanghai is a smart business move as this city has already looked past the pandemic and a country that is now in the commanding driver seat of the global luxury business.