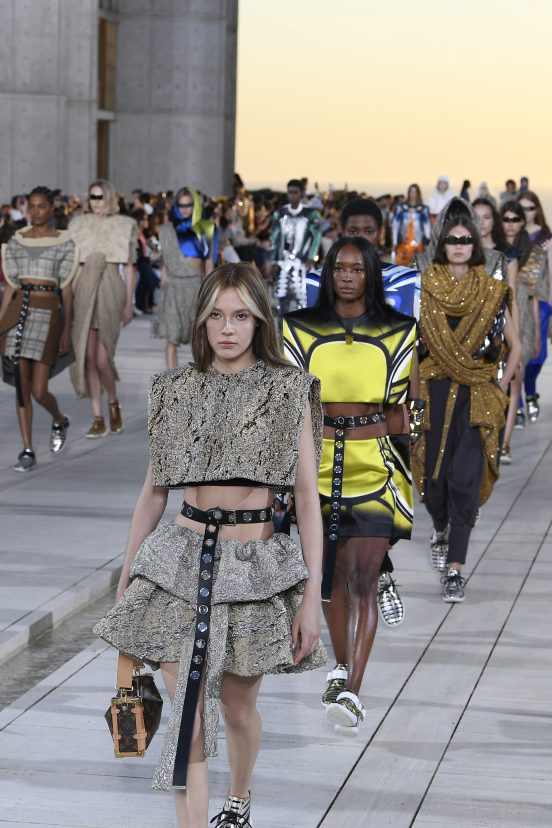 Days of Future Past

Boasting a dazzling interplay of texture and light and a visionary furthering of creative director Nicolas Ghesquière’s mingling of past, present, and future, Louis Vuitton‘s Cruise 2023 show was a brilliant dialogue between the designer’s craft and the location he selected to show it.

Last year’s Cruise 2022 show was held at Paris‘ Axe Majeur, a freestanding series of sculptures that form a sort of propulsive and linear journey through geometry. A palpable and symbolic sense of the axis or the straight line is present in the location of today’s show as well: the courtyard of San Diego’s Salk Institute for Biological Studies, a visionary complex designed by architect Louis Kahn in the early 60’s and named for its founder, Jonas Salk, the developer of the polio vaccine. One of the most impressive examples of brutalism in the United States (a sadly under-appreciated style in the country’s collective consciousness), the space’s symbolic suggestion of progress and infinity elegantly expresses the endless procession towards knowledge. While Salk’s selection of Khan to design his laboratory space certainly was partially rooted in the look toward the future that characterized the careers of both men, their tie was rooted more personally in the past as well: both were born to Russian-Jewish immigrant parents.

Staged just as the sun was beginning to dip below the horizon of Pacific, the show saw this space illuminated with golden light.

This sense of the commingling of the past and future embodied in the location is also a defining characteristic of Ghesquière’s design work for Louis Vuitton. This collection saw the designer push this sensibility more inventively than ever before, abstracting and broadening his references to the past while looking more boldly toward the future.

Multi-piece wraps recalled Ancient Greek tunics or the garb of Amazon warriors, while metallic scales updated medieval armor for the modern warrior woman, who, on another day, might step out in a moto jacket (one of the few more direct reappearances from previous collections) rendered in fabrics and graphics inspired by the aesthetic heritage So-Cal’s water-sports culture.

The sunset-drenched location seemed to be on the forefront of Ghesquière’s mind in crafting the collection and in particular selecting its material palette, and in many ways the sun felt like the show’s protagonist, making itself known as its light reflected and shimmered in myriad ways off the lustrous fabrics. High-shine leathers and metallic denims were stitched with embroidery that oxidizes and changes color with time. Laser-cut, gladiator-like skirts danced and shimmered in the sun along with their wearers steps.

This reverence with the sun was at once juxtaposed and harmonized alongside the timeless human need to protect the body from it, a demand that takes on a new light of urgency and uncertainty in the face of climate change, our future’s biggest threat.

Protection was offered by linen head wraps the likes of which might be seen at Rick Owens or on Arrakis, futuristic sunglasses, and California sun-minded reimaginings of samurai helms.

Other essential standout looks included the opulent metallic suit that merged tailoring and streetwear – worn by model and activist Lauren Wasser, whose golden prosthetic legs were proudly on display and whose presence was an important step in her mission to further conversation and advocacy on toxic shock syndrome – and the final three looks, which featured tops that were all immense, ballooning shoulders from which a downpour of shimmering fur-like fabric cascaded.

It’s no coincidence that the show was held at a place named for the creator of one of history’s most important vaccines. For obvious reasons, now feels like a particularly important time to recognize the importance of innovations such as these, and to challenge the world to keep dreaming them up. Looking to the futuristic visions of the past and recognizing the obligation to the future of the present, Ghesquière and Louis Vuitton deliver a collection and presentation that inspire us to meet the future with optimism, grit, bravery, and imagination – to work for a world where we can continue to celebrate the sun, rather than fearing it.