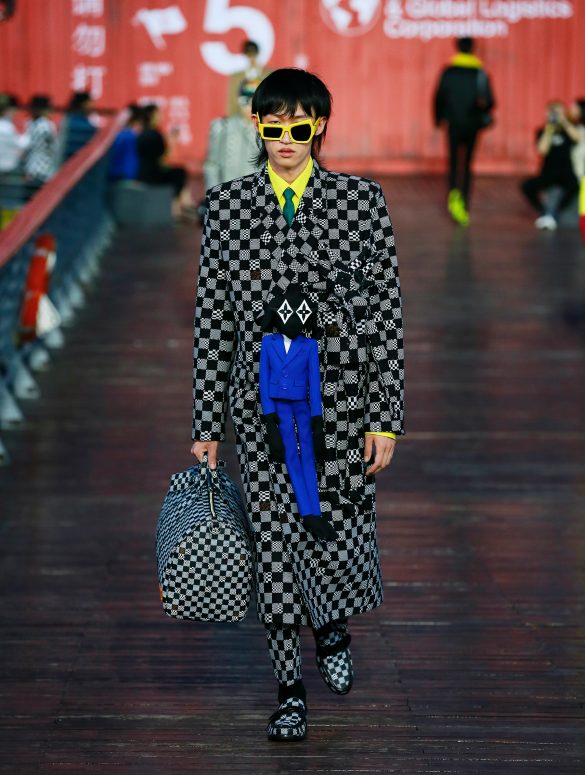 After departing from Asnière-sur-Mer more than three weeks ago, Zoooom has finally arrived in Shanghai now as an inflatable balloon cartoon character being carried on the shoulder of Kris Wu, the Chinese superstar/actor-singer who wore a one-button cropped jacket ecru suit, while all Zoooom’s friends are sitting on top of the red shipping containers at the dock of the recently opened Tank Museum on the Huangpu River.

Due to the cancellation of the Paris men’s spring 2021 show season early this July in Paris, Virgil Abloh, the men’s creative director, decided to feature a short film with cartoon characters – Zoooom and his friends – on a sea voyage to take the actual live fashion show first to Shanghai then to Tokyo where Louis Vuitton has just opened a stand-alone men’s store in the new Miyashita Park Mall in Shibuya to coincide with the Olympics Games.

Titled ‘Upcycling Ideology’, Abloh’s 5th show is a testament to the new way of working on the collection moving forward as the creative director insisted that the pre-pandemic idea of having to show new items every single season is now obsolete and that reducing waste and overproduction are prime values for the brand’s consumers.

Thus in this show, 25 of the looks came directly from the fall-winter 2020-2021 show from last January principally the entire section of the blue and white cloud prints suits and 25 looks of clothes made from surplus stock fabrics and/or repurpose clothes from stock leftovers. Now, these garments all have a special new LV Upcycling Signal Logo shown here on sleeves of black jackets. Every future seasonless season show will have these mixtures of old and new, created and reconditioned, walking on the runway side-by-side.

“The philosophy calls for a fundamental decision: now, previous seasons no longer exist as individual entity, but unify into one cannon. In a fast-paced and fleeting time, repetition equals documentation: gestures made and lessons learned. From this point onward, work can be recycled, upcycled, and even reissued in its original forms,” stated the press notes on Abloh’s new creative approach.

In a season where the factories have just re-opened thereby reducing the access to new fabrics, a few brands that showed in Paris have adopted this similar standard of production due to the more restrictive availability of resources immediately at their disposal when they started to work on their collections after the re-opening in mid-May in Europe.

But the idea of upcycling and recycling in fashion originated in 1994 when the Belgian designer working in Paris Martin Margiela introduced a new collection entirely made from complete reproductions from its own archives of previous season’s outings. Margiela later launched an entire permanent collection named ‘Replica’ were discovered vintage garments were remade in an exacting manner and labeled with their origins inside each garment commercialized.

Abloh divided the show into two sections with a traditional dragon dance as a quick intermission – the first comprising of garments from previous seasons like the suiting with the cutouts and the blue and white clouds prints outfits taken directly from the fall 2020 show last January. This time the models walked around a lineup of LV team members in blue cotton jumpsuits carrying actual white cotton clouds in a formation along the riverbank runway. This reminded me of the décor of the Marc Jacobs fall 2014 at the Lexington Armory with cloud balloons floated over the audience while Jessica Lange rapped the lyrics of “Happy Days Are Here Again”. This first section could have used a bit of more precise editing as the chosen looks seemed repetitive but maybe that’s the idea.

The second part consists of colorful and structured clothes with the focus around the broad shoulder jacket and slim pantsuits as models walked with a video of Lauryn Hill performing in the background. Think of those big shoulder pads as the dominant silhouettes from the late 1980s especially from Claude Montana and think of those vivid colors and silhouettes from Thierry Mugler from the early 1990s. Even the bright neon yellow nylon raincoat worn over a black suit boasts the broad shoulder fit. A few of the suits are made from degradé fabrics to match the leather shades of the new Keepall as if the clothes on the models’ body are less crucial than the bags on their hands. And some of the suits have stuffed animals clinging to them like a new accessory. All these looks are super commercial and should all perform well for the brand’s apparel fashion category.

However, the best sections of the clothes both casual sweaters, trench, and more dressed up patterned suits showed too much of the dependency on the different manifestations of the Louis Vuitton brand monogram logo as if by themselves the garments lack values to stand on their own. The downside of this concentration on garments adorned with the enduring monogram logo – a sure bet at retail success – is that the clothes feel like fillers and gestures rather than any kind of substantive innovation in terms of the ideas of fashion designs. There is the additional danger of a downward reach to the mass market arena driven by these logo-heavy clothes harking back to the heyday of logomania at the start of the new century. But these logo clothes are in their own ways the new sportswear. All these looks are super commercial and should all perform well for the brand’s apparel fashion category. But is this enough coming from one of the largest global luxury fashion brands?

As this is fashion, what exactly do these clothes say?

The Louis Vuitton heritage is in travel and fashion, especially the men’s collection, is a new foundation at the house. The selection of the clothes shown here speaks to a different social class of consumers or consumers who have changed their status along the way as they are more of the traditional menswear staples with a more formal feel and a deeper root in tailoring. There are less of the streetwear products introduced in Abloh’s debut show in 2018. In the post-pandemic world, these suits may be too formal for a younger generation not that they don’t wear suits anymore but that they may want to break up the actual suit into separates and wear them in a less formal manner. This is still central to the luxury business as to what products the luxury brand produce and market. For sure the craftsmanship and the tailoring are all present in each of these finely made garments.

Does this men’s show on the shore of the Huangpu River reflect the current times and provide a template for a new era?

I still remembered clearly the Sean John men’s fall-winter 2001 show staged during NY Fashion Week in February 2001 where the mixtures of tailoring, giant fur coats, and essential ‘street’ garments cemented the ‘ghetto fabulous’ era at the time. Then, it was not just a fashion show but a cultural zeitgeist of the moment, a moment when fashion took command and displayed its great influence on what and how people wear what clothes on and off the runway and on and off the music videos. The fashion became a vocabulary of cultural conversations.

For all the balloons and blow up special effects, this show feels more manufactured than an authentic outing.  Perhaps the show is a reaction to current times rather than contributing to the shaping of the culture at large. It feels much less urgent, despite our current times, and much less passionate than an intellectual discourse.