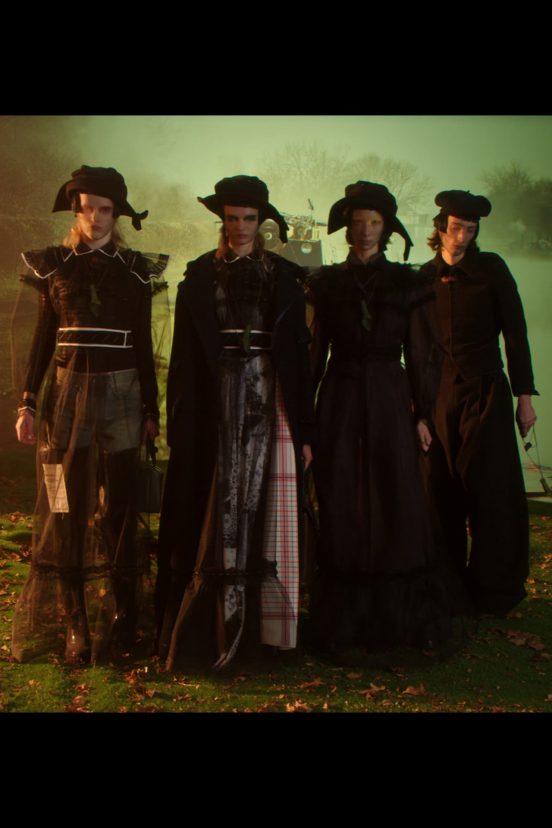 A Renaissance of Poetic Youths Amidst a Sea of Reclaim Clothes

At Maison Margiela, the creative director John Galliano continued to create a film for this Spring 2022 Co-Ed collection. In early July, during the haute couture show, Galliano and the director Olivier Dahan premiered a near full-length movie for the Artisanal Fall 2021 season at the theater on the Champs Élysées. The youths in that Artisanal film spanned several centuries, going through various apocalypses, and the clothes on their bodies transformed with the ‘essorage’ techniques.

Dahan and Galliano made a new film for the Co-Ed Spring 2022 collection, continuing the story of the couture movie.

However, the feel now is surely less dystopian but rather a gathering of a new community of youths – or fisherpeople – still set in a distant utopia in ‘the age of emergence’ in these experiences of the passage of time. Both the Artisanal Fall 2021 and this Co-Ed Spring 2022 films managed to convey a powerful narrative that has been Galliano’s forte and an essential element of his fashion work.

In this film, the fishermen and fisherwomen live on here in the creatively inventive garments that Galliano started for the couture Artisanal as experimental pieces that have matured into these ready-to-wear clothes spanning romantic to idealistic and heroic moods.

In a way, this film format seems more suitable than the live runway show in this storytelling process and how the clothes are shown, displaying their dense textures and constructions through filming techniques. The gradation of the lighting that Dahan used in both films creates a mood and allows the clothes to be seen by the audience with a degree of depth not always visible in a live show.

For example, there was a scene with two models wearing two thick boiled wool coats with multiple pockets. As an audience looking at the design of clothes specifically, I was able to discern the feel of the coat, their heavy textures as the models move around, and the stiffness of the coats themselves.

This aspect of movements in the movie where all the models involved moved their bodies in various ways isn’t apparent at a live show. Models in live shows just walked straight down the runway then back the other way, displaying slight other movements, thus limiting the agility of the actual garments.

Dahan’s filming techniques also allow multiple views of the same looks, and often looks from one scene emerge again in another later on or hints of one garment in another. For example, the washed denims jackets mixed with plaids, in the beginning, are seen again later slightly differently in three models rowing a boat going somewhere or perhaps in the land of ‘the garden of love.’

And the film highlighted the volumes and textures of these spring clothes, showing off the meaning of ‘neo-alchemy’ Galliano spoke about in July. All the clothes convey this experimental mixture of materials, fabric techniques and combinations of garments.

The strength of this spring collection lies in the range of outerwear. Herringbone greatcoats, black caban wool coats or in single breast black wool coats, a black sleeveless cape or denim cape over wool coat in shapes that range from slouchy to linear cuts are the inventive range of outerwear worn with hot denim pants and fitted knitwear paired inside. A black wool loden coat merged with a denim jacket in a marriage of dressing codes over different eras.

‘Essorage’ is a washed technique Galliano developed to age the fabrics in a particular manner to erase their previous existence to create a new mood.

These types of denim treated with this process of enzyme bleach and stonewash treatments debuted in the Artisanal Fall collection. One olive wool coat has a collar and front pockets remnants from a denim jacket sown onto the front lapel of the coat. Another short wool coat has the back taken out and paired with the back part of some other denim jacket. Pants are in oversize large, either worn with black fitted jackets or with dusty charcoal coats.

The women’s long sequins dress in torn fabrics and dress with the black sheer silk layer of overlay or, as Galliano called them, ‘anonymity of the lining,’ a process that came from Martin Margiela’s Spring 1993 collection. Yellow sheer tulle overlay the large denim pants turned strapless dress or a red tulle sleeveless tank on top of a brown dress/skirt denim dress. A section of white dresses with sheer black overlays demonstrates this ‘heritage’ technique, a different idea of the overt sex clothes shown elsewhere.

Trompe l’oeil is a technique that Martin Margiela deployed to crush different tempos of the dress together on one garment, often juxtaposing diverse forms onto one seamless surface. But, the mix here that Galliano called ‘inverted snobbery’ is pervasive in the reclaim recycle and reinvented garments that the founder was known for remixing fine and humble materials. Torchons and linings became outer layers.

And what’s a Galliano collection without bits of poetry, this time coming from the English poet William Blake. ‘I went to the Garden of Love. And saw what I never had seen.’ was the line connecting scenes from Blake 1794’s The Garden of Love, published as part of his collection, Songs of Experience.

Hopefully, Galliano will continue to move forward with the film format instead of immediately returning to the live show runway. A short movie is a compelling and persuasive format for a designer prone to a good dose of the narrative around his clothes. Films are also a dialogue process for a collection that evolved from one season into the next, where experiments materialized into realized new fashion garments.