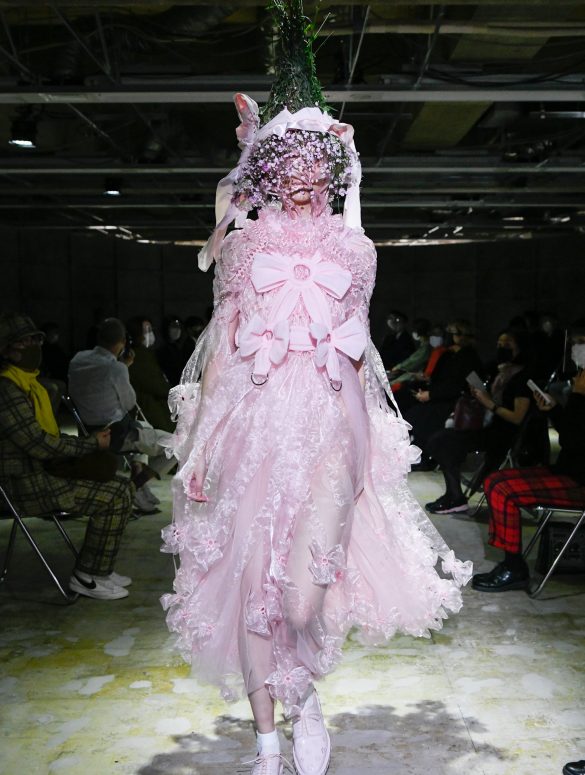 Pink is in the Heart and in the Dress

Once in a blue moon with a long time waiting, one can sit back and look at a collection of clothes where so much of the pre-occupations of modern fashion are pretty much irrelevant  – no heritage, no house codes, no DNA, and no commercial considerations for that matter.

Fashion creativity at its highest level involving innovations of design and materials as well as an unfettered outlook is something that Kei Ninomiya has done since his first Paris showing of the Comme des Garçons brand Noir Kei Ninomiya to a small crowd off from the official calendar in early October 2015.

At the time and in total silence with no music save for the footsteps of the models on the wooden plank floors, Ninomiya showed gigantic black garments entirely made without the need for sewing as the clothes were held together with tiny black studs or rivets, chain linking, tab fastenings, or with tied knots from strips of tulle on the surfaces to make these three-dimensional garments, one dress resembled a giant assembly of black flower sculptures in an extraordinary demonstration of handiwork to generate the volumes both to foment the decorative and structural shapes.

I have seen some of these dresses post-show at the Place Vendôme showroom and a peek inside the garments revealed the utterly intricate constructions that held each of the garments together.

That Spring 2016 show was like the first of the short journey that Kei Ninomiya has traveled since to establish a firm signature work in the span of less than half a decade. Ninomiya, a student of the Royal Academy of Fine Arts in Antwerp, began working as a pattern cutter at Comme des Garçons in 2008 gathering and garnishing his technical skills that allowed him to experiment with new ways to do the traditional work of clothes making that permitted the designer to freely craft his stitch-free gowns. Rei Kawakubo offered him his own line in 2012 and he began his sojourn to Paris in 2015.

Both of these shows in September 2019 and in February 2020 this fall 2020 in Paris cemented the culmination of these many processes of growth of his craft/innovation paradigm. The fall 2020 show ended with two gigantic red and black twisted tulle dresses, with the black gown so voluminous that nearly buried the models under its three-dimensional surfaces save for her two hands, partial face, and ankles – a reminder of one of the sleeveless twisted white tulles with black trim that was a highlight of the Spring 2020 show.

Noir’s spring show at the Comme des Garçons offices in Tokyo as usual did not dwell on any specific theme.

The show progressed from the opening looks of black shiny circular crystal beads strung on metallic coils and curled into shapes of a short dress or in circular asymmetry, strings spinning around the body in a precursor to a dress to the series of light pink dresses towards the last half of the show with a beautiful pink chiffon with bow decorations or a light white and pink tulle sleeveless dress with an overlay of pink feathers glued to metallic strings. Pink here is meant to denote the positive energy of moving forward.

The clothes feel less conceptual despite their heavy handiwork and their uniqueness. Unwrap the metal coil cape and underneath is a great black cotton dress. There is a great black horse leather biker with metal rings on the sleeves and trims. Likewise, take away some of the black bows and there is a perfect black cotton long coat and a tiered ruffle skirt.

“Instead of specially weaving new fabrics or something, I decided to use things that were readily available on hand,” Kei Ninomiya said of the materials he used to make these Spring clothes, among them the fabrics he had always used in his past collections – acetate satin, nylon tulle, oxford cotton, silk satin, and cupra taffeta.

In many of Noir’s past shows in Paris, it is hard to discern the idea of femininity underneath the armor of tulle that practically wrapped up the model beneath the voluminous gowns. Ninomiya always worked with floral artists Azuma Makoto who made specific headpieces to match each outfit, hairpieces that at times completely covered the models’ faces like the Afro tufted seedpods used in the Spring 2019 show or the cacti, ferns, and tropical plants for the Spring 2020 show. Here, Makoto made headpieces by bundling floral plants with black silk ribbons as bows. But the range of the softer dresses in light hues of pink – a mass of pink ribbons dress, a pink flowers zippered long coat, a long sheath of pink 3D flowers dress, or a light pink cropped jacket with a giant bow at the front paired with a satin and tulle skirt – felt much more feminine this season than ever before where the art object-clothes overwhelm the person. That’s what I think is new in this showing, even just a peek of the women wearing all these pink wonders.

But what is ahead for this designer who has made experimentation and innovation the centerpiece of his fashion work?

Surely the freedom to work without restrictions and constraints – within the Comme des Garçons corporate structure that is a unique business model in the industry – is probably the most valuable of assets in fashion at any moment, but more so right now when many corporate concerns are starting to reign in designers to make more commercial products rather than ‘fashion’.

That said, the Noir collection is never lacking in explorable ideas that can translate into wearable commercial products for the retail stores, especially the global Dover Street Market locations that are all carrying a range of Noir. I have seen Noir products at the Dover Street Market store on Lexington Avenue in New York in previous seasons. There are always available ranges of black leather bikers, even vegan leather with quilting details, along with a variety of tulle ruffle dresses that are recognizable as Noir although not in the dramatic manner as seen on the runway.

But for Kei Ninomiya’s runway, creativity must reign supreme.