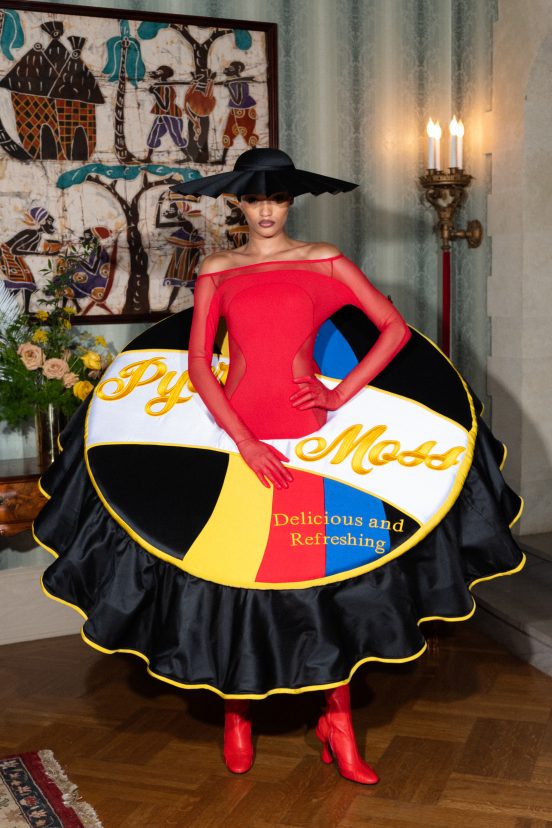 It happened as the torrential rainstorms forced the Pyer Moss team to postpone the show after nearly four hours of wait at the Villa Lewaro in Irvington, about an hour and a half from the city in Westchester County, as the rainfall was relentless and unyielding. It is also the first time the French fashion body has asked a black designer to join the official couture calendar, reflecting a changing reality of the once insular fashion world.

The live-streamed on the brand’s website clocks in at around two and half hours worth of footing, documenting from the crowd arriving on a sunny Saturday afternoon to the various guests mainly wearing all-white outfits speaking on topics of the day. Elaine Brown, the writer-singer and Black Panther party leader, opened the show on stage with a speech on liberation and the need to organize and power to the people – “We have to get back on the freedom train.” Then 22GZ, an artist from Flatbush, provided the soundtrack along with male dancers.

Now, on a sunny afternoon, Pyer Moss staged in an ambitious show not seen in American fashion for some time. Jean-Raymond showed a brief collection of clothes with a bit of costume offering as tributes to different inventions listed by the Library of Congress by black entrepreneurs and a few elegant dresses that straddle the commercial and the experimental.

From a design perspective, perhaps some of the clothes felt slightly bent towards costumes. But, then sometimes it is necessary to say things in such a literal manner to be understood. The center gravity of the aesthetics of Pyer Moss is the combination of the quest for racial justice on one side and resurrection and acknowledgment of the contribution of black artists to culture.

I first encountered Kerby Jean-Raymond’s work in a hot early afternoon mid-summer in July 2015 deep in Tribecca, were a few days of the first New York Fashion Week: Men’s under the auspices of the CFDA. Then at a studio on the northern border with Soho, he presented a still life with models in his spring 2016 range in a collection he titled ‘Ota Benga.’ It turned out that Ota Benga, the person, was an African man exhibited at the Bronx Zoo at the turn of the early twentieth century inside the zoo’s Monkey House.

Among the fine black jackets and pantsuits and an array of sporty offerings for that season, what remained for me from that Spring 2016 presentation was the discovery of Ota Benga and, more critically, how that has to do with fashion at all. It dawned on me that the 23-year-old Congolese pygmy exhibited at the Bronx Zoo in 1906 has everything to do with how fashion has been able to create illusions for so long without any reckonings. Calling attention to these injustices is about violence and cultural contributions unacknowledged and contributions practically robbed by other players.

Then a few months later, inside a loft space in Chelsea, Jean-Raymond turned his summer men’s presentation into an actual runway show. In stark black and white with full-on raw graphic violence of police brutality, I remembered the audience sat silently throughout the screening before showing any fashion. Among the front-row guests at the time were the victims of police brutality who saw reflections of their experiences. At the time, the designer wasn’t big enough to draw the usual media heavyweights.

In the next few seasons, more like few years, the designer brought his Pyer Moss brand to the full embrace of the black experience, bringing forth forgotten legacies progressively onto bigger venues. These grander stages culminated in the Spring 2020 show in September 2019 at the fully packed historic Kings Theater in Brooklyn that consolidates the designer three-part series on the power of black truth and history in pop culture now viewed through the lens of an African-American observer and also the purveyor of new enlightenment.

The series started with the black cowboys in February 2018, then to the community of family at the Weeksville in the Crown Heights section of Brooklyn, the first free black communities founded in 1838. Then “See Us Now?” was etched on a cumberbund, and “Stop Calling 911 on the Culture” was splashed across an embroidered shirt. These words are synonymous with Pyer Moss as a second brand name. The last big show from September 2019 honored Sister Rosetta Tharpe, a black pioneer in the formative years of rock and roll.

We are an invention inside of an invention. Inside of the creation of race, we made blackness. Uprooted from home and put in a foreign land, we made culture. And when they tried to strip our humanity, we made freedom so tethered to each other that it still shapes the world today.

There are expectations that, in some ways, this Couture 1 collection will lay down new roots, creating a new seeding for a different fashion heritage pretty much immediately. The strength of this show lies less with the physical clothes shown than in the idea of the collection and of the show itself at the estate owned by the first black American millionaire Madam C.J. Walker. Her fortune came from the hair products for black women, but she was known to share her wealth among people who formed a community around her.

Titled Wat U Iz A Pawn? the clothes in this debut couture collection reflect this intense dichotomy of tensions – the wanting to make impactful statements and the need for actually making desirable garments.

On the one hand, the few costume outfits seem caricature – the white refrigerator with colorful letterings ‘But Who Invented Black Trauma?’ is written like a daily reminder to feed the dog or take out the trash. Or even the red jumpsuit with a giant silk ‘skirt’ in the shape of a soft drink bottle cap and the logo peanut butter circular dress.

But, there are elegant and straightforward made-to-measure clothes that can easily find clients. Like the black ruffle short front dress with a leather corset in the shape of respirator masks, the gold circular embroidered short dress, the brown argyle broad shoulder single breast pantsuit, and the white midriff one button single breast jacket with a layered skirt panel short pants.

The peanut butter ‘dress’ is a reminder of George Washington Carver, the black scientist know as the ‘Peanut Man’ who popularized many peanuts products, including making peanut butter part of daily life.

The geometric cut-out shapes of the pale blue taffeta dress with a cut out at the side waist and a bustle skirt and the white one sleeve dress minus the attached chair show the designer’s appetite for experimentation with different forms and structures. In that same spirit is the giant shoulder yellow jacket dress with one-sided green puffer leg attachment. The standout is the very simple light pink bra folds dress in the form of a lampshade.

The clothes did not seem to have all the technical aspects of haute couture mastered yet. Certainly, Jean-Raymond can give the products of his brand a deeply personal retinue and imbue a dress with that weight of history and that personal message of the brand. There’s a real sense of authenticity here, perhaps one of the most challenging feats to accomplish in fashion today. It is this authenticity that is missing, for example, in the work of say Virgil Abloh that is about performative sound and fury.

Pierre Cardin, the famed French protean and avant-garde designer-mogul, once said, ‘the clothing I prefer is the one I create for a life that does not yet exist, the world of tomorrow.’

Kerby Jean-Raymond wrote almost these near exact words as what Cardin said but four decades later. “At our best, we create space and tools for those who will come next, knowing that we must pay it forward. What will you leave behind? What will they build from what you’ve done? Or have you not learned and are only building for yourself in this world?”

The stories the world tells us are about this pain. The stories we tell about each other about our own lives are about how grandma loves us with bible verses and lemonade, how bloodlines never defined who our aunts and uncles were, how the house was always big enough to take in everybody we love. We hold stories of glory in our bodies. Black imagination is this world’s greatest technology, the designer passionately wrote to affirm a new way to narrate black lives, cultures, and fashion.

The most emphatic fashion has always been about connecting with the current relevancy today, especially the hearts and minds of the young audience. Looking closely at the people arriving and those sitting at the show through this two and half hour of live stream broadcast at the brand’s website is to understand and grasp the real juice of this debut show. It is a gathering of like-minded young people to celebrate the beauty and substance of the different contributors to our shared culture.

Kerby Jean-Raymond and his brand Pyer Moss stand for ideas, values, and an embrace of a new cultural movement far beyond the immediacy of fashion. What was missing at this fall Paris couture season amounted to a purpose for all infinite refine garments shown. Somewhere fabulous to dress up and party post-pandemic? Well, that’s just quaint.

The act of purchasing is an act of sharing common values. Young consumers do not just purchase a pair of Reebok or Pyer Moss chunky colored sole sneakers for only their style appeal, but for what both the designer and the brand represent as a person and as a fashion brand.