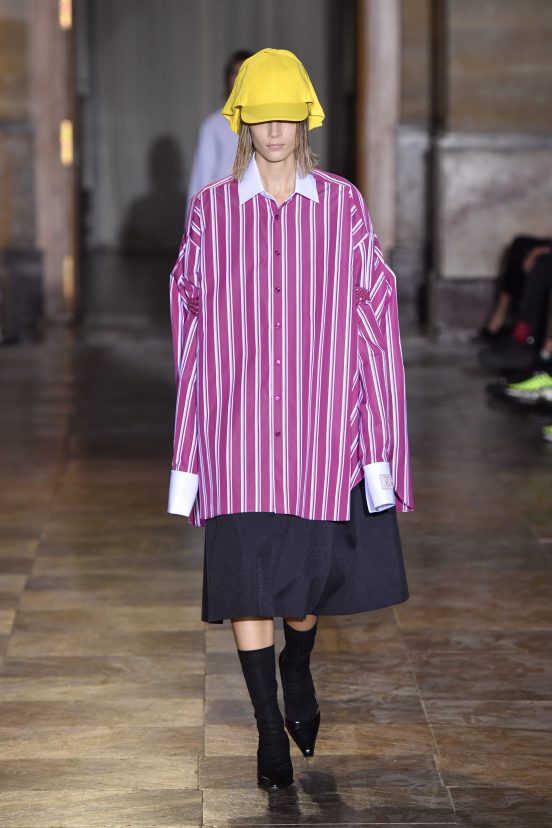 One Wardrobe for Two

In October 1984, the maverick French designer Jean-Paul Gaultier staged a fashion show titled ‘Un garderobe pour deux’ (A wardrobe for two.) He dressed the models, both male and female, in similar or exact clothes to demystify the idea of gender garments which is a cultural construction.

In that Spring 1985 show, Gaultier introduced the skirt–pant in a big way–a pant with a frontal flap creating the illusion of a long skirt in navy pinstripe or black gabardine with double breast tailored jacket. But there were also plenty of genuine skirts for men along with cut-out tailored jackets and blousons in the repertoire to subvert gendered sartorial stereotypes (and patriarchy.)

‘I think,” he said before the show began, ”that it is now time for men to be seductive. I don’t mean androgynous, though. I mean, sexy. Why should women have all the advantages?’ the French designer said in an interview with the New York Times on September 18, 1984, on the occasion of the Bergdorf Goodman sponsored of his Fall 1984 show in New York City at the time.

I remembered seeing all of Raf Simons fashion shows in Paris when the Belgian designer, who started in menswear in 1995, began showing for the first time in Paris for Fall 1997 at a garage space in the Bastille in late January 1997. Simons gave ‘St John’s High School’ as a title to that show. For the previous season, Spring 1997, the designer did a catalog documenting a ‘Teenage Summer Camp’ with black and white photographs of teenagers frolicking around camp wrapped inside a 33″ record paper pocket.

Simons’s aesthetic has always centered around teen culture – skaters, high school students, maybe also high school dropouts, underground teen music (Kraftwerk, Black Flag), and adolescent angst and expressive rebellion. Clothing became the essential accouterment in these years where self-expressions were coming to the surface. And Simons’ men collection has always been super influential with its outlook on youth back when no fashion brands paid anything attention to young consumers, the days long before there was a thing called Gen Z.

The thinking behind this Spring 2022 collection is no different. It’s the youth that still dictates. “The wisdom of youth wise beyond their years playing by the rules. Rules are made to be broken.”  That was the sentiment Simons mentioned as a metaphor for the collection. Even a quote from the playwright George Bernard Shaw and his famous lines saying ‘youth is wasted on the young’ written in 1935.

Titled ‘Flashes of a Future Romance, in a World Full of Noises’ with motifs from the Canadian photo conceptual artist Steven Shearer, the Italian artist Andra Ursuta and the Flemish painters Pieter Brueghel the Elder and the Younger inspired the canvasing of the jackets and shorts.  Simons used words like ‘reading, writing, dancing, kissing, licking, sleeping, crying, leading’ to describe what he sensed as youths’ mood today.

In a Spring 2022 collection of flawless but more subdued black clothes with simple streamlined and linear silhouettes, Simons intends to make genderless clothes a basic premise for these youth with a different mindset than kids growing up in the 1990s. But a few years ago, there was a sense of urgency in this genderless genre that seemed void now. And, this void is apparent in this spring collection populated with fine clothes.

Gender fluidity is something that many young kids have already adopted in their lives for the past few years, thus not a new phenomenon, and it has a much further expanded view than one would expect. Today young people are far more open than the youths from even a decade ago and much more tolerant of diverging points of view on social and cultural matters, including forms of dress.

For this collection, Simons engendered the idea of genderless garments but aggregated the clothes in his ways. But, the designer mainly stayed within his signature work instead of venturing far from his terrain. The show opened with a men’s (well, a garment worn by a male model) black flare knee-length coat and short skirt with painted motifs inscribed at the front that kind of set the mood for this nonchalant serene show, the Bourse de Commerce.

The basic shape is centered around a very soft A-line descending silhouette with more of an emphasis both on the linear and the slouchy side.

That said, in this show, the basic garment for young guys is a boat neck knee-length boxy sleeveless dress. That served as a one-piece ‘shirt’ substitute worn in black wool or satin or white over a black short-sleeved polo and under a range of tailored slim to slouchy jackets, black gabardine coats, and narrow or boxy sweaters.

Nevertheless, the collection is refined and crafted with Simons’ signature design and sensibility. One great sentiment about the show is how typical all these clothes looked on the guys and girls. With clothes, it takes a minute for the eyes to adjust to new proportions and new ways of wearing even the most classic of garments – a single breast linear cut black wool jacket. And Simons normalized this genderless effort by not straying far into what can be termed as avant-garde or hype fashion.

Making the guys and girls dressed in the same classical clothes accept that it might not be so weird. But here is the thing also to consider – fashion at Simons level should no longer be about abetting a comfort zone but instead creating a new sensibility, one that can encompass what is going on in society at large. This collection follows social, societal, and cultural norms and changes already taking place rather than leading the train in new directions.