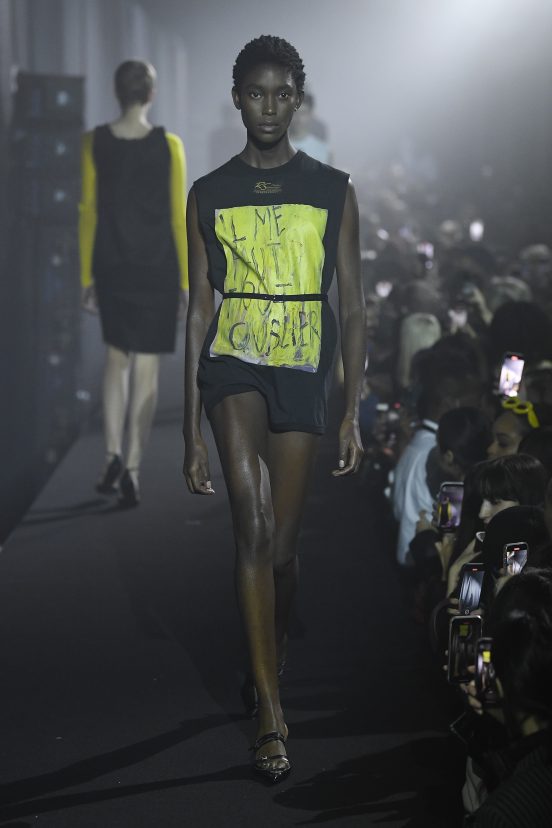 Subtracting the Superfluous, as Raf Simons Returns to Form

Set in the cavernous bowels of warehouse space in east London (which is billed as a cultural destination), Raf Simon’s deferred London Fashion Week show was always going to be an event. The Printworks was filled to the brim with the usual suspects, but as there was also a tie-in with i-D magazine, which was offering its readers and any lucky scrollers a chance to attend, the crowd was gifted with more eclectic energy. And once inside, a buzz was created simply by the character of the surroundings – formerly home to one of the largest printing factories in Western Europe, the original inner workings of machinery and printing presses have been preserved – creating a raw, stripped-back atmosphere.

On arrival, show-goers were met with a techno soundtrack that would not have been out of place at a Berlin underground club night, but seeing as the guest list was made up of a healthy ratio from the Gen Z cohort, it seemed as if Raf Simons wanted to meet his growing youth-led fanbase where they might come to play.

Not a designer known for offering deep explanations and breakdowns of his work – preferring show-over-tell – this season’s show notes spoke of several references to stripping back and simplicity, and that is what we got, as a few key silhouettes such as the adult romper, sleeveless jacket, legging, and sack dress were all revisited throughout the show in varying fabrics and finishes.

Calling it a “reduction to an essence, to essential form” it is little wonder that Simons would take a silhouette, so heavily associated with the early stages of life and reimagine it as a genderless shape that should be embraced by the sexes.

There was also an alternative focus on the body, but not in the overtly sexual way that has been popularised over the last four weeks; in Simon’s world, a more nuanced approach was needed. The string vest, a ubiquitous under-layer worn by the male working class, was reworked for a new generation. Seen here in a more boxy form and in multiple colours, revealing the torso underneath. Simon intended to have “slithers of skin on display, between layers of cloth,” and with both male and female models sporting coloured waist-high leggings, the shock factor was markedly diminished, in a good way.

Tailoring was referred to as a “machine for the body,” and with the official definition of a machine being that it is an apparatus made up of several parts, which each have a specific function, but work together to perform a task, the designer took an abstract reference and demonstrated why he is so well regarded as an independent freethinker. Each part of the tailored suit – jacket, skirt, trousers – was again stripped back, sleeves removed, and edges left raw (“sliced away to the status of tank top” according to to show notes), trousers cut down to simple panels, and sack dresses gathered hastily at the neckline. To the point where the clothing became more about ‘gesture,’ embodying the freedom of movement.

Philippe Vandenberg, as an artist, struggled with the demand to conform in his youth, acting as a catalyst for his highly personal and expressive canvasses, which often depicted chaotic scenes or statements such as ‘Kill Them All’, displaying his personal inner turmoil in a highly public manner.

An artist-to-artist collaboration with fellow Belgian Philippe Vandenberg was teased with the show invite, which took the form of a full-sized poster. Vandenberg, as an artist, struggled with the demand to conform in his youth, acting as a catalyst for his highly personal and expressive canvasses, which often depicted chaotic scenes or statements such as ‘Kill Them All’, displaying his personal inner turmoil in a highly public manner.  Today’s collaboration with the estate re-contextualized some of his artworks – specifically his text work – into all-over prints, giving the artist’s work a new perspective through rendering it onto fabric, with the work appearing on said rompers, skirts, and a paper-like cotton skirt and woven tank set.

When released, the collection will be sold under the co-label Raf Simons/Philippe Vandenberg.