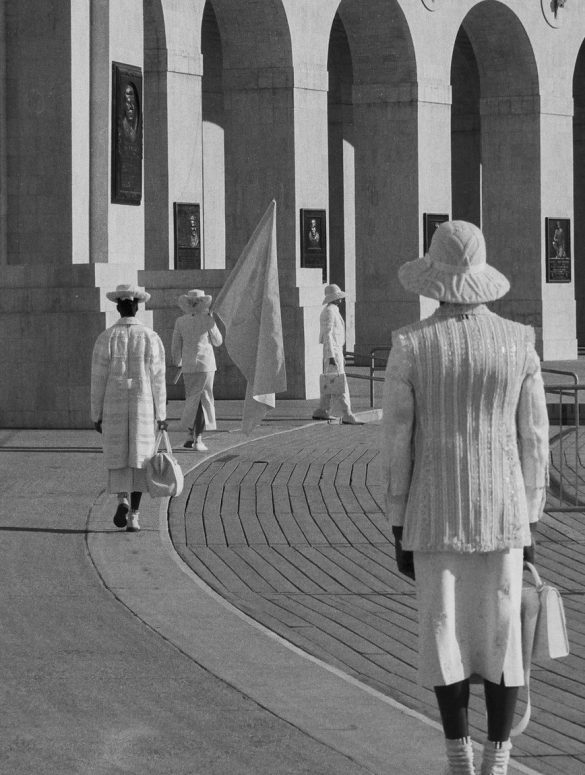 One Wardrobe for Two

Thom Browne is a master of building an environment – a bubble so to speak – that wrap his clothes with a degree of mystical meanings beyond the mere facts that they are the most traditional garments altered by his design made in so-called old fashion fabrics like seersucker, plaid, and tropical wool, especially in light grey. Most often too there are guards, real ones, or garden gnomes standing at the perimeters keeping an eye on the sacred grounds behind them.

Browne’s ingenuous construction of marvelous universes meticulously created around each of his collections has been a marvel for his audience allowing his fashion shows to transport many of us.

I have followed Browne’s work since the very beginning even before he staged his first show. Through the years I have been to his skating rings, tennis courts, faraway beaches, a funeral in New York, a funeral in Paris, winter wonderlands, spring wonderlands, a fancy cabaret in Paris, a military school in Paris, a surreal sit-down dinner in the Salon Impériale at the old Intercontinental hotel and numerous others that separately and all together built a consciousness around the designer’s clothes. Since the start his clean line sharp tailored single-breast small lapel suit in tropical wool with shorten length for pants and for sleeves has been uniquily his own.

Under the current circumstances of this season, Browne created a film that imagines a sports broadcast at the 2132 Olympics taking place on the Moon. Set at a reproduction of the original LA Coliseum, complete with faux sports anchors commenting while models paraded on a red staircase wearing elaborate ‘uniforms’, mostly in white and very light shades of yellow, ivory and with careful observation light grey and mostly straight and slim silhouette.

This was a follow up to Browne’s video release this past July during the men’s Paris digital week showing a first look with the artist Moses Sumney who performed the 1896 Olympic hymn wearing what could be described as a straight floor length wrap skirt with silk stain intarsia diagonal stripes as a tribute to the simplicity between the balance of masculine and feminine silhouettes in sports. This dual-gender show format continued the fall 2020 show in Paris in early March where couples took to the snowy runway often wearing similar garments, now crystallized by the white long short sleeve polo and ivory pleated skirt for both sexes.

In this spring collection, Browne examines the underlying structure of gendered clothing constructions that have existed over the past century or more and how the particulars of these standards using the more uniform look and aesthetics of athletics as an equalizing template.

“Menswear as women’s wear, women’s as men’s. Proportions elongated and exaggerated. For women, oversize sack suits, long, structured blazers and pencil skirts that pull off the body, high armhole blazers with skirts that sit low on the waist. For men, long oversized blazers and coats, structured, fully canvased knitwear with pleated skirts, shorts and cropped trousers,” said the document issued at the time as the sports broadcast release. What the above statement meant was that in this collection how men’s and women’s clothes were made have been simplified in a way that erased how clothes may look gendered. The lean and long lines of the clothes blurred the gender lines as long polos and pleated skirts, and long trompe l’oeil dress with imprint a coat. A range of tailored jackets and coats exhibited the designer’s penchant for special fabrics hidden behind the monochrome palettes like a sack coat from grosgrain ribbons or one coat made from seersucker re-imagined as wool, a sack coat made of fabric from satin and ribbons stitched together, a striped rugby jacket made in intarsia, or a coat made from strips of wool seersucker ruched and hand stitched together.

I think the difference here is that Browne’s genderless approach isn’t about just making the same jacket that both sexes can wear – this is how all the designers that put out so called gender fluid clothes have been doing, scratching the surface of gender fluidity. Now the constructions are pretty much one standard  – this makes the look of the physical garment much more similar – meaning a double breast jacket is cut in the same way

A couple of the looks have garments that seemed to be random mergers of different parts like a white pleated skirt with what seemed a lace blouse on top or a vest and skirt look with an attached coat on one side. Why were these ‘merged’ items shown here amidst the simple and clean sport lineup? This remind me of the spectacular fall 2019 show where Browne demonstrate his master skills with models in group of three showing the deconstruction of one outfit into another on the runway. These merged garments seemed to confuse the beauty of the simple ‘athletic’ silhouettes and don’t really belong here – comparatively they would be like an interception in American football.

The filmed video for all its quirkiness and attempted humors cannot really replace a live Thom Browne fashion show where the magic happens in real life not on celluloid or now on high resolution cameras.