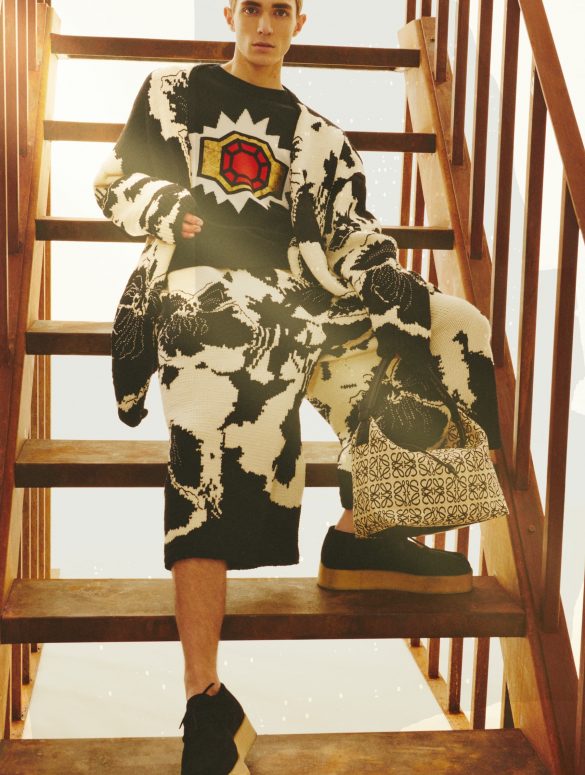 Saturday is normally known as the Hermès Saturday as the brand usually staged its semi-annual show in the 8 PM slot during the Paris men’s fashion. This time, Hermès moved to an early afternoon time slot with a live show done together like last season with the theatre master Cyril Teste.

But the day belongs to the British designer Wales Bonner and the French designer Charaf Tajer; both excel in extending their personal vision onto their fashion. At Loewe, Jonathan Anderson adapted the American artist Joe Brainard’s collages, borrowing the floral prints for shearling coats, in a more literal manner.

Grace Wales Bonner, the British-Jamaican designer, is a storyteller – a novelist of clothes – and one of the first of the young mixed heritages British designers who have emerged in the last five years to literally change the landscape of the fashion coming out of London, especially in menswear that included Bianca Saunders and Priya Ahluwalia. Wales Bonner is a pioneer fashion designer with an aesthetic foundation grounded in different worlds and whose fashion language is an authentic voice of her personal experiences and others like her in Britain’s recent history.

Cultural heritages for Wales Bonner, who experienced and lived in both realms, aren’t just solely about traditions and values but also about a sartorial phenomenon. With an eye on how the different style practices can merge into a new language, a vocabulary for the young generation is more accustomed to a world where everyone and everything, including clothes, are mixed up with less clear gender lines and less clear provenance.

For this fall, Wales Bonner collaborated with the Jamaican filmmaker Jeano Edwards in a film titled ‘The Light of Black Sunlight’, which is meant to be the last of a triptych of collections she had started in 2020. The theme of weaving together the cultural threads between Britain and Jamaica, now with this exploration of the worlds of the Caribbean and the British intellectual thinking and their sartorial expressions. The film locations posit the audience between Port Antonio and Kingston and London’s Goodenough College. Providing a mood for this post-colonial discourse among scholars and perhaps now soon among fashion designers with the backdrop of green banana leaves and old walls of a university dormitory, with a reading of poems from Derek Walcott.

“The English language is nobody’s special property. It is the property of the imagination. It is the property of the language itself,” wrote the Saint Lucian poet Derek Walcott in 1985. Wales Bonner based her thinking on a starting point of Black Oxford that documents the untold black history at the University of Oxford that celebrates the contributions and legacies of unknown black scholars like Eric Williams and Kofoworola Moore. Wales Bonner’s concise collection matched up with the flowing words of the poem and the music of Laraaji.

These dualities of cultures manifest in clothes as soft. Still, firm tailoring that underpinned this fall collection from a raw denim two buttons fitted unstructured large lapel jacket and short loose denim pants, or in the cropped one button white jacket or the black and white pinstripe jacket both with shorter sleeves made with the Saville Row tailors Anderson & Sheppard in a nod to the classicism of the Afro-Atlantic ethos of the post-war years. A red cotton shirt with paisley print and the hand crochet sleeveless knit vests are the added artisanal elements with Indian hand embroidery.

The long white, slightly flare coat with a shearling shawl collar and the black military coat with golden buttons are great outerwear pieces, this time a bit more classic in shapes and cuts. The large stripe knit long sleeve polo with khaki pleated flare pants and a leather shearling coat with a print sweater and white pants recalls those pictures of Oxford students going to and from class, at least in this imaginary way. Wales Bonner continues her work with Adidas with a sharp blue tracksuit and a knee-length white shirt.

“So this season I wanted to work with the estate of Joe Brainard, the collages he became incredibly famous for of pansies and flowers. I wanted to really draw on the flower series because it really could translate into different mediums that we use at Loewe, like hand-knit and intarsia into leather, which is very difficult to do and complex. So you can play with scale and at the same time give it a textural engagement within the product,” Jonathan Anderson said of the genesis for the Loewe collection as the camera focused on one model wearing a long crochet floral cardigan coat with black pants and then another in a black leather trench carrying a black leather bag with floral embroideries.

The American artist and writer Joe Brainard, know for his assemblages, collage, and drawing. Paintings as well as theatrical sets and comics as poetry, reflected the turmoil of the late 1960s and 1970s with society at large of the throes of major social, cultural and economic transformation, the kind of rapid changes often seen in how he had distilled these experiences into collages as a mean to assemble new meanings amidst turmoil all around and to find beauty and perhaps transcendent in elevating the ordinary into ‘art’.

Within this collection, it is about looking at the individual character of Joe Brainard and of that moment, and how that relates to today in terms of subcultural movements and creative movements.

Anderson explained his reasoning for selecting Brainard beyond the immediacy of employing the different collages, a technique that manifested throughout the collection.

“In the collection as well, we have these triangular tent-shaped trousers, when you pull them out, you have two rectangles in which we presented the artwork on the side so you could hold it out. The trouser became a performative piece,” Anderson said as a model in an olive knit sweater and black pants with triangular panels showing the bright floral print.

Of the different collages of Brainard prints on a shearling coat showing the diverse range of graphics and cartoon drawings, Anderson mentioned: “the idea to create collages through the material, different types and moments ultimately of Brainard’s work.”

“I like the idea of taking feminine codes and recutting them into menswear fabrics so taking the camel wool and forcing it into a draped structure to show this idea of double-face or a cashmere that feels sensual,” Anderson pointed to the camel cashmere tight sweater worn with a heavy wool wrap around draped long boxy shorts.

At times, the clothes felt a bit too tricky and much less innovative in design originality than in the past seasons. The exploration of shapes had resulted in more inventive silhouettes of garments. The triplet sweaters, the triplet polo, and the triplet tee shirts – black, pink and yellow or pink, white, and grey color combinations – Anderson said was a direct outtake of Brainard’s idea of repetition. But Balenciaga had made these double shirts for its men’s fall 2018 collection.

The collection contains less innovative design ideas that Anderson has always championed in his work, both for his own collection and for Loewe. What passes as new in this collection, for example, the multiple belt leather pants (punk!) felt more decorative than a real substantial new shape. Even the pants with the triangular panels feel somehow very familiar despite their odd or unusual shapes.

The colorful floral collages, while beautifully and perfectly executed into the shearling coat, displayed the literal of the pictorial in Brainard’s art but lacked the artist’s spirit with the sense of juxtaposing the banality with the extraordinary and the specific with the universal in an assembly at times ironic and humorous.

That said, the collection has plenty of playful pieces – a fine red leather coat, shearling coats, a great hand-knit sweater made of complicated patterns, and a simple camel shearling duffle hooded coat. Besides, the Eye/Nature/Loewe collection of upcycling garments highlights this Loewe fall presentation with its quirky mixtures of sportswear and outdoor clothes.

Charaf Tajer, the designer and founder of Casablanca – based in London – in 2018 after starting the Parisian street brand Pigalle a decade earlier, has definite ideas and a particular aesthetic about menswear for the next generation of leisure class consumers, especially the younger set. His fall film titled ‘Grand Prix’ is nothing but an ultimate dream of this fabulousness and the real Riviera’s glamour here reimagined with a brand new cast of characters. But the champagne, the luxury hotel, and the gambling are all there, at least in the film, if not in real life.

With many of his design motif based on travel experiences and at after-hours fabulous resort locations where a silk print shirt with a matching short is more than a sufficient fashion statement, Tajer opted this time for the French Riviera where the race track in Monaco and those famous parties in Saint Tropez on the hillside overlooking the ocean where this new fall clothes – elegant and luxurious – will more than fit in perfectly. It is the kind of lifestyle that Casablanca’s young consumer aspire to in the next stop for post-streetwear fashion.

Prints are Casablanca’s specialty, although much less abundant this time, here in the multitude of diamond shape patterns that recall the diamond card shapes from the Monte Carlo casinos, a print that runs through the green and white boxy faux fur coat or the black and white tracksuit. A sweatshirt with a pastel print of an imaginary Monaca race-track and a similar print in a blouson. The whole collection is more tailored with pastel suiting, but there isn’t a whiff of formality in these clothes under Tajer’s hands.

Casablanca sure has come a long way in the few years since its debut – I recalled Casablanca’s first presentation staged at his mother’s Paris apartment – and Tajer does it by sticking to his instinct rather than following any outside dictates. His continued collaboration with New Balance with the 327 sneakers will sure be a sell-out again.

In expanding into the near future, Tajer should keep in mind what brought him and his new brand to where it is in the short years in existence. The designer has to remain steadfast with his instincts as to the changing mood of young people and with his sense of aesthetics that has propelled Casablanca to achieving a firm foothold in fashion at this point. Look to the sky but keep your feet on the ground as the saying goes.