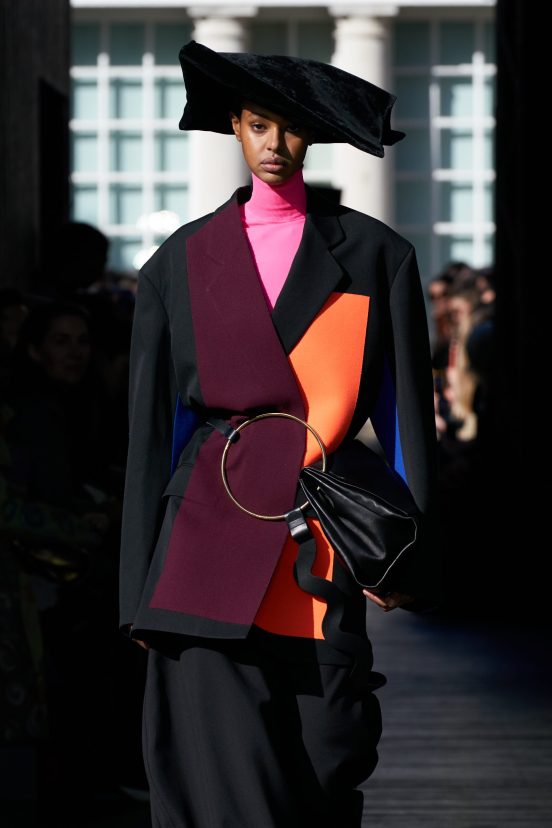 Roksanda Invites Us to Indulge In A Confection of Colour

Circling back to conclude, what was a disrupted London Fashion Week, Roksanda Ilinčič’s choice of the Serpentine Gallery in the heart of London’s Hyde Park was a welcome change of pace.  Gathering the fashion crowd to slow down and take in her skills as a master colourist.

Roksanda is one of those rare talents, who doesn’t make bold statements or cause ripples on the front pages of the fashion press, so we sometimes tend to forget how valuable she is to the British fashion landscape. Season after season producing collections that give good shape and tease you out of your comfort zone into a world of techni-colour.

Roksanda is one of those rare talents, who season after season produces collections that give good shape

For summer 2023 she tapped into the trend for designers truly designing for the way women want to dress today. Silhouettes that don’t require the wearer to agonise over perceived flaws or concern themselves with over-exposure. Tailoring hung loose under outerwear which was at once a classic blanket coat and then altogether something different from the back, as what appeared to be a hand-painted body-length silk scarf billowed cape-like from the back of a model’s collar

The fact that the show was taking place during London’s hosting of the Frieze Art Fair, may have had some bearing on the heavy emphasis placed on art-inspired prints.  A particularly interesting technique was used across midi gowns and full skirts, where plain white fabric looked to have been pleated and folded before being over-printed or hand-painted, and digitally -inspired prints which almost looked like stills from a video installation, were informed by the female visual artist Pipilotti Rist.

The designer’s expert hand at crafting colour brightened up the dark drum-like structure of the 21st Serpentine pavilion, titled the ‘Black Chapel’. And was matched only by the brands neon-lit front row. Creatively curating her use of sharp hues across the collection, meant that boxy blazers were plastered with blocked tones of deep burgundy and fiery orange, flashes of fuchsia shaped into oversized roses were set against black tailoring (aligning with Ilinčič’s meditative state of coming out of the darkness, and the symbolism of the rose, used for births, marriages, and deaths), and shots of highlighter brights in neon orange and green rendered into the more wearable roll necks, and for those wishing to upstage a bride or two, the maximalist sculpted-peplum top or layered pyramid-style dress (which was made from recycled material from the Roksanda studio) will do the job.

This collection was also an inclusive no-brainer, without the gimmicks or typical the borrowed-from-the-boys/girls styling tricks. As part of today’s show there was a casting mix of plus-size, older, male and standard-sized models giving an insight into the way in which the designer considers her brand as a viable option for all, as swathes of silky layers which easily drape across the body, tapered trousers, and second-skin tops will surely be a hit within all markets

As part of today’s show there was a casting mix of plus-size, older, male and standard-sized models giving an insight into the way in which the designer considers her brand as a viable option for all

Designers supporting designers has had very little coverage this season, but there is an encouraging wave of them creating a support network, especially among those who have a connection through their college – Central Saint Martins or the Parsons School of Design, for example – or from starting out around the same time, in this case the early 2000s, as both Erdem Moralioglu (whose brand was founded in the same year as Ilinčič, 2005) and Christopher Kane were sat front row, proving that the draw of the designer, extends beyond just her clothes.