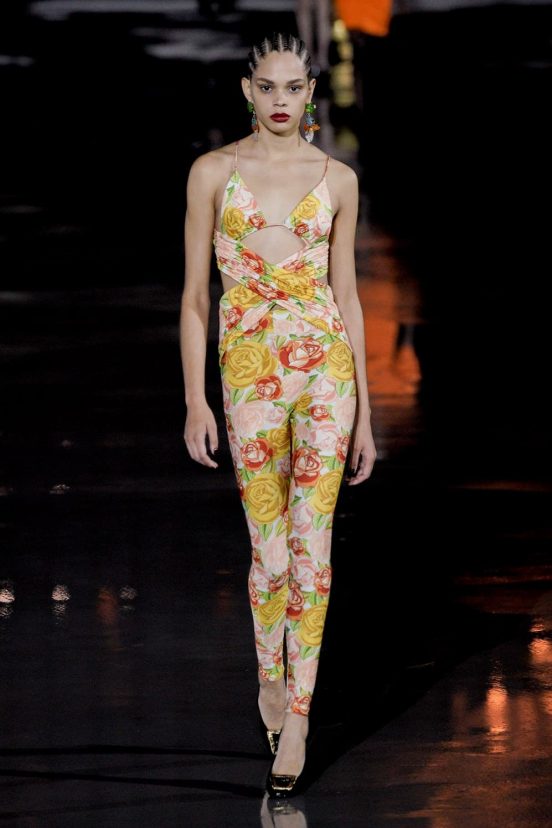 Patience and Discipline to Hone the Clothes to Perfection

At precisely 20:00 CET sharp, the lights on the Tour Eiffel sparkle like it does every night precisely on the hour for about ten minutes, making the entire structure come to life. Local Parisians often called it an ejaculation. And, it is no difference on this evening on the Fontaine du Jardin du Trocadéro directly on the opposite bank of the Seine River, the lights dimmed for the return of Saint Laurent live fashion show held outdoors around a black steel rectangular light structure-fountain.

Saint Laurent was the first major French brand to depart from the Paris show calendar early in the pandemic lockdown. The brands have shown their new collections in the intervening seasons via taped shows from the desert to the iceberg mountain and then a live show in Venice for the Spring 2022 menswear collection.

In return to Paris, Anthony Vaccarello sent out a sharp, focus, and just entirely very fashion-forward collection featuring the gamut of the brand – the broad shoulder jackets, the jumpsuits, the long slender dress, the stretch leggings, the slouchy dresses, and the double-bra top paired with v-waistline pant-leggings. All were taking place with a bit of rainwater falling from the black steel spraying fountain making this Saint Laurent return as majestic as that show in the desert sands.

Sex has always been a central and integral part of the YSL language and aesthetics ever since the days when the brand founder made clothes for women to wipe out the vestiges of patriarchy.

Under Vaccarello’s tenure, sex becomes both the manifestation of the body’s repossession and the embodiment of the sentiments of young women not afraid of dressing with a bit of skin shown in the kind of subversive seduction that is the YSL language.

“We were invited to a friend’s house who was throwing a party. At one point, I no longer spot Yves. I look for him and find him with a young unknown girl. She had wedge heels, a turban on her head, and things she had tinkered into clothes. It was Paloma Picasso,” was a quote from Pierre Bergé that Vaccarello used as a point of departure for the collection celebrating the freedom of spirit.

That meant for YSL the spirit of crossing boundaries of fashion, erasing the old lines between couture and ready to wear, and dissolving the fine points between good and bad taste.

“For a long time, I wanted to transpose the meeting between Paloma Picasso and Yves Saint Laurent, whose importance few realize in the designer’s creative journey. It is a moment to which I am sensitive as a designer because, for me, it is the defining moment when Saint Laurent’s fashion creativity becomes a style,” said Anthony Vaccarello of his muse this season.

By evoking the tributes to Paloma Picasso’s independent spirit and her energetic freedom without any real restrictions, Vaccarello’s Spring 2022 collection as an ode to emancipation also demonstrated how the designer had freed himself in these same processes over his years at the creative helm of the brand.

Now, with this Spring 2022 collection, the designer perfected the silhouettes with such ease and effortless, like a pro tennis player hitting a backhand game-winner shot from the left court. Matchpoint and game over.

This Spring 2022 show highlighted the greatest of Vaccarello’s designs since he joined Saint Laurent in 2016 following the departure of Hedi Slimane, responsible for the current brand name. Although familiar, the looks are radically different, as if the garment became more perfected after previous trials. The clothes feel a bit familiar but they also feel different and not the same.

Take, for example, the light grey broad shoulder double breast four buttons jacket in the show’s opening segment. This sharp tailoring shape first appeared in late February 2019 for that Fall 2019 show with broad and structured couture shoulders that hang the rest of the jacket or coat. Then, the rigid jackets and coats with their heavy padding backing underneath denoted a more masculine cut.

Now, the same silhouette sees a lightly softer but still broad shoulder cut with a shorter body and shorter sleeves paired with matching pant-leggings that were the anchor for the Fall 2020 show of colorful bourgeois ranges of jackets and coats. And the pant-leggings that pervade this collection are now sleek, chic, and less sporty than in Fall 2020.

The tailoring is particularly powerful in this show.

The burst of flower prints discovered from the archives that first appeared on short deep v-neck dresses for Fall 2018 now surface as dressy and elegant red rose jumpsuits or yellow rose double-bra top and stretch pants. And traditional YSL color blocks now resurfaced in a red and black asymmetrical front cut jacket dress and a pair of violet gloves or a tricolor red-black-white on a simple tank top pant look.

Sure it does take a confident woman to walk in these clothes. And that’s fine as so often fashion attempts to portray powerful and free women without actually giving them the actual garments that can convey the idea of independence without the need for rhetoric. Furthermore, in the context of the body’s return to fashion center stage, Anthony Vaccarello effortlessly owned this territory without any competition.

It is also now a moment to recognize Vaccarello’s creative journey reaching a kind of apotheosis on its own today, putting his signature on a venerable French fashion house.