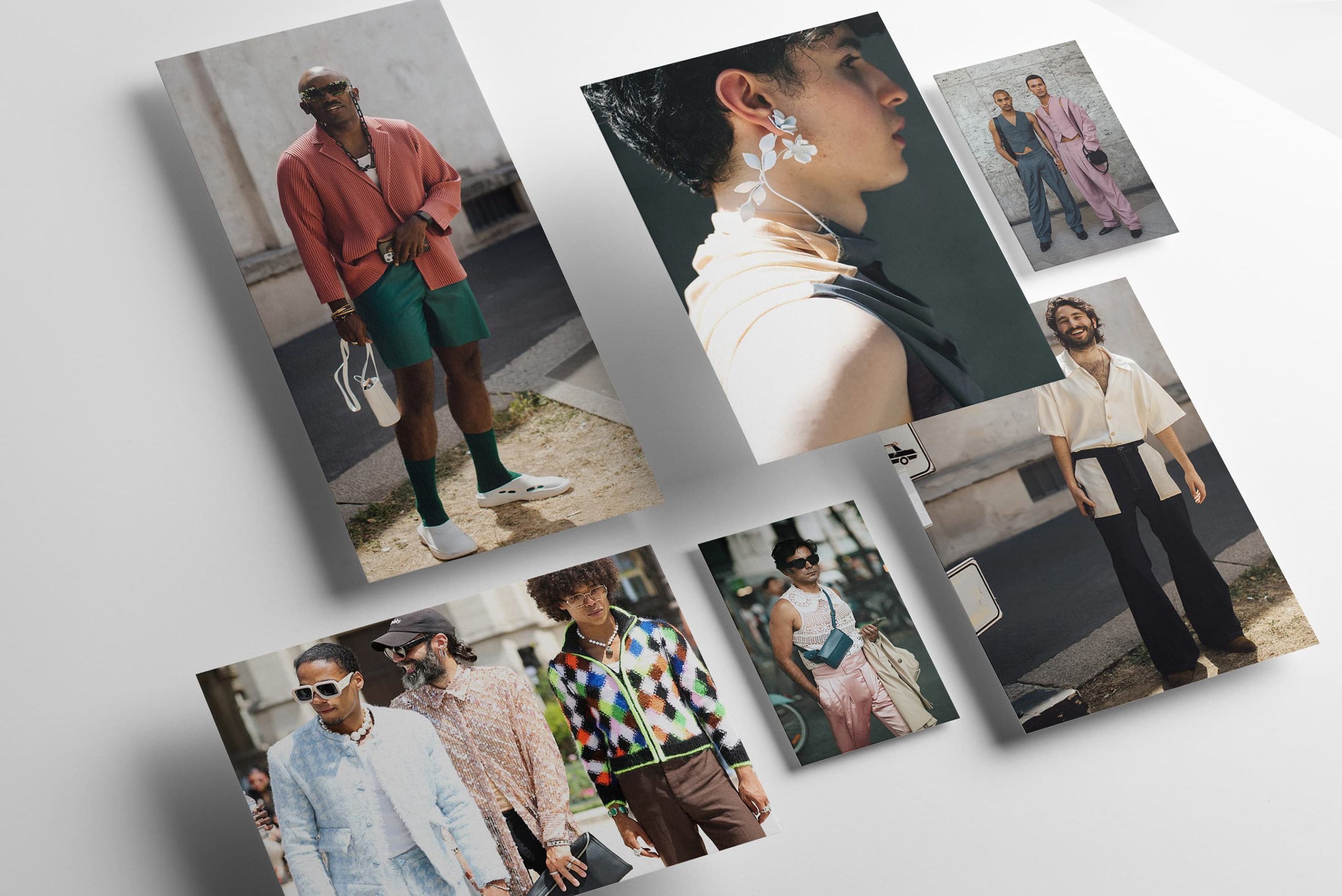 Fashion as a form of escapism was a key theme running through the Spring Summer 2023 season, from the bohemian lifestyles of the California Surfer influencing board shorts and sunshine palettes, while a full-on take on kink that can be attributed to the queer community means that head-to-toe leather and skin is in. Show-goers on the street didn’t disappoint either, and brought out a strong showing that was on a par with what we might expect from the women’s seasons.  Here, we breakdown the top street style looks to have on your radar from the Spring Summer 2023 shows.

Doing a Double-take on Denim

The traditional hard-working properties of denim lived up to their reputation, as they appeared in various iterations on attendees across the streets.  As some chose to take a cleaner route, doubling up on straight-leg jeans and a stripped-back trucker, there was a real sense of fun being had with texture. Embellishment, bleached effects, and most directional heavy distressing gave the fabric a DIY effect which can be achieved at all levels of the market.

Tanks for the Memories

All hail the tank top, the silhouette coming to save your summer. A winner from the Prada/Miu Miu hit-making factory, the tank top could be seen as the inevitable re-boot that was next in line following all the interest in the 1990s and early 2000s across social media. But while it acts as one of the few accessible trends currently on the market – only costing a few dollars at any mass market retailer – it also has an often unexplored deep rooted connection with the queer community, as a uniform-of-sorts to identify ones identity, which this season has garnered more visibility than any other, updating its associations with heteronormative masculinity.

The freedom that the Biker sub-culture represents is filtering through to luxury fashion, but again provides another accessible avenue for those wishing to recreate the look, as vintage shops and resale sites will likely still have an abundance of stock of quality leather jackets and brands such as Honda, who this season collaborated with DSquared2.  Despite the heatwave that Milan and Paris were experiencing black-on-black leather was worn head-to-toe without show-goers breaking a sweat, but the introduction of the gilet vest will make this trend a lot more wearable in the summer season.

Prep Schools in for Summer

The usurping of the office look has had many seeking out new uniform styles to adopt. With Gen Z wrestling Preppy style from its conservative background, silhouettes were remixed through colour and graphic prints, think cartoon motifs, colour-pop satin bomber sets, city shorts rendered in sheers or cable knits added an interesting twist. The influence of sports by-way-of Varsity also came through with the Louis Vuitton Jacket being sported in tribute to the late Virgil Abloh.

Despite the experimentation throughout the shows, which had designers reworking stereotypical masculine silhouettes, the Resort Shirt, as a summer staple was also doing the rounds. The boxy short sleeve shirt has been an easy pick season-after-season for all body types, but here wearers riffed off of retro styling inspired by the 1950s, embraced maximalist animal motifs, while of course paying homage to the kitschy floral prints of vintage Hawaii shirts.

A softness has descended across menswear, with the pastel palette setting the mood. Worn monochromatically, from head (there were several pink dye jobs on models and influencers) to cleated toe, sages and blues also made an impact, but tones of the same colour in multiple textures worked just as well, with pink in sugary or dusty shades being the preferred choice for tailoring.

The accessory du jour this season was the classic necktie, but rather than appearing in its typical guise (although there were a few solid colour and foulard patterns to be found), perhaps as a reflection of the over-turning of traditional masculine tropes post-pandemic, those on the street went for kink versions in the form of harnesses, ultra-wide kipper ties, and had us seeing double by wearing two at a time. But it wasn’t only the tie that had a ‘chokehold’ around necks this season, the neckerchief was also trending as silky scarf patterns and bandanna prints were affixed with a simple knot adorning bare chests.

The Long and Short of it

On the runway hems may have been rising – everyone from Prada, to Vetements and Egonlab featured a short short – but on the streets the Bermuda Short became a go-to pairing, along with the Resort Shirt.  The shorts longer line and volume fit has made it a comfort-driven staple among the menswear crowd, with the ability to shape-shift to work as part of a tailored suit, relaxing its formality, or taking inspiration from the California surfer dudes, being sported in technical nylons or sweats in juicy brights.

A Softer Take on Masculinity

There was a sea change happening across the Mens shows, whether it was the lightness and escapism afforded by the season, the reassessing of certain ‘rules’ around what is deemed masculine, or the fact that the runway season coincides with the full return to a celebration of Pride Month. Those on the street got the memo and chose to fully express themselves hyper-visibly, reworking corsetry, cut-outs, chiffon, and skirts, giving us an eye towards a more fluid future where rigid gender codes are no longer a consideration.