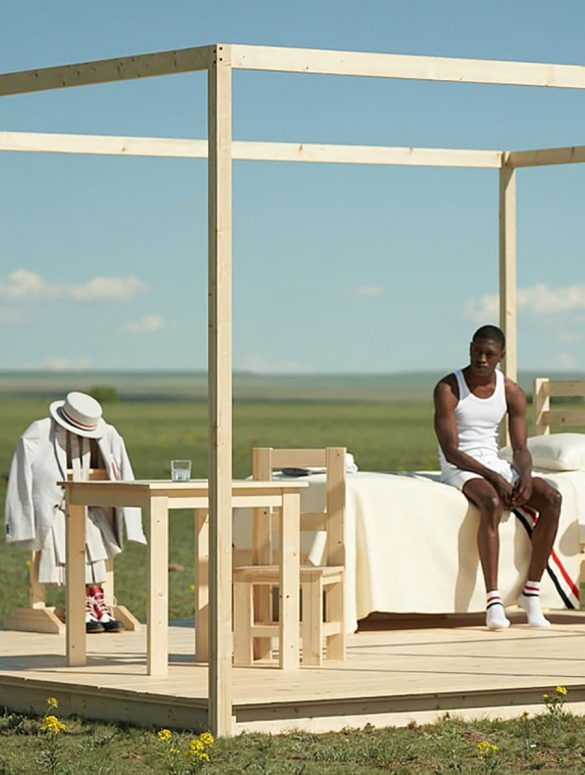 Every day, the artist works to enclose infinity. Time and space, the conditions under which the artist meets his medium, present themselves as infinite, and the artist must work to cut them down to size, to express the infinite within a fraction of itself. With its strange effects on our perception of time and enclosed space, the pandemic and resulting quarantines of the past year and a half have catalyzed this process, made it more universal and urgent: we have all been artists and athletes in a way, in that we must actively create our own existence through the endless succession of days.

Hard at work through it all has been Thom Browne. As part of Spring 2022 Paris Men’s Fashion Week, the designer has presented a film that feels like both a manifesto of the role of the designer as an artist and a visual poem that captures the collective spirit of solitude and perseverance. As its ellipse-embraced title suggests, …Looking Forward to Tomorrow… is an exploration of infinity and a celebration of endurance.

Filmed in 35mm in the expansive flatlands of northern New Mexico, the film uses abstract and symbolic visual narration to tell the story of a lone marathon runner – played by Dominique Hollington – as he prepares for a race in solitude. Gorgeous, long shots of the sky and the praire, dotted with yellow wildflowers, immediately create a sense of the infinite which persists throughout the film. Through this endless world of sky and ground, the runner runs steadily forward, only stopping when he returns to his home each day to sleep. Merely the frame of a room, this house is more of an abstract suggestion of a house, as minimal as possible while still undeniably conveying its presence as the runner’s home. Against the blue and purple expanse of the sky, the sharp lines of the enclosure take on a beautiful and powerful visual symbolism – like the runner’s unflagging steps each day, they enclose a portion of infinity. Set to a sweeping and romantic musical score, the cycle repeats several times – the runner rises at dawn, runs through the day, returns home at dusk, and puts himself to sleep – until one day, something has changed.

The day for which the runner was preparing has arrived, signaled by a change in outfit: he has swapped his runner’s tights for a look that perfectly embodies Thom Browne’s cerebral blend of tight, classic tailoring and visionary experimentalism. On top, we can see the timeless influence of 1920’s Parisian men’s dressing in an unconstructed blazer in white and light gray pinstripes, with a vest and matching tie and cloth boater hat – though Browne’s penchant for a more tightly tailored fit feels idiosyncratically contemporary. The bottom half of the look has a similar sense of uniting past and present, but with an even wider span. While it attests to a progressive dismantling of gender binaries, the pleated skirt also feels reminiscent of pteruges, the layered skirt-like armor worn by Greek and Roman warriors. This connection is amplified by the boots, which feel like a mix of basketball high-tops, brogued cowboy boots, and gladiator sandals.

This is a powerful approach to the idea of menswear, a thoughtful consideration of what changes and what endures in the concept of masculinity as it echoes across time.

Clad in this new set of armor which is both hard and soft, our runner steadily approaches the arena of competition, a coliseum-like structure that suddenly rises from the plain. Here the film makes a surprising but brilliant shift in medium, swapping film for minimalist, hand-drawn animation. The idea of infinity and enclosure returns in a reconfigured form as the screen is dominated by blank white space, with simple geometric shapes combining to represent human beings and the shapes they occupy. Though these cubist forms of circles, triangles, and squares are minimal and abstract, the animation impressively conveys an incredible sense of emotion, action, and humanity. The physical actions of sports competition take on a transcendental quality as they are enclosed by pen and rendered through their most essential elements. The pressure and passion of the runner’s final race takes on a universal and empathetic quality.

The film ends as, after his victory, the runner returns to his home and his solitude. After the human connection and spectacle of the games, the quality of this solitude retroactively shifts, becomes less melancholic. He is alone, but not lonely; he is connected to himself and others through his humble generosity, his endurance, and the quiet joy with which he meets each day.

In both medium and message, the film is perhaps the most honest and beautiful reflection of the uncertainty and solitude of the past year and a half that we’ve seen. Many creators told stories through film and digital because they had to; this story had to be told through film.

Its visual elements themselves, seen through both the camera and animation, are the story: the cyclicality and solitude of rising to meet each day, working to enclose that infinity, and the emotional reward that comes when we find that honest perseverance has allowed us to be proud of ourselves and each other.

With artful precision, Thom Browne dresses the man who embodies these qualities: the man who, with quiet commitment, learns from the past, works wholly in the present, and looks forward to the future.