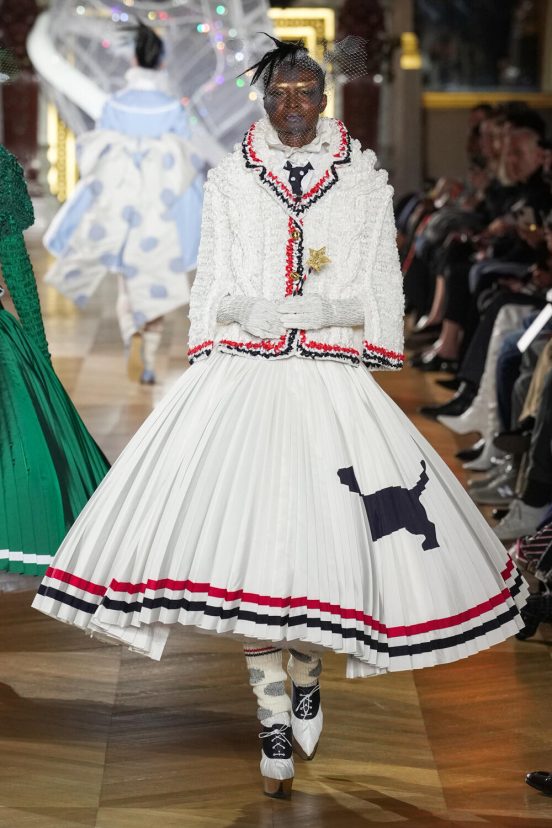 Thom Browne can be counted on to put on a show, as one of the best in the industry to do so, it was disappointing then, to find that for his summer 2023 spectacle – which was deserving of a space that would have done it justice – it played out via the traditional catwalk format, meaning that only half of all attendees got to experience the performance which soundtracked the show. This was pure theatre and deserved to be staged as such.

This show opens up a dialogue about what exactly should be considered ready-to-wear, as these pieces, especially the opening opera coats, seemed anything but.

The parts that the full audience had the chance to experience were a studied masterclass in how far the boundaries of craftsmanship can be stretched, as the hyperbole of the silhouettes presented would not have been out of place on the Couture schedule.

This show opens up a dialogue about what exactly should be considered ready-to-wear, as these pieces, especially the opening opera coats, seemed anything but ready to be worn.  Fashion is a business after all, and it is buyers, clients, editors and stylists that are sitting front row and want to be able to visualise their ‘buys’, summer vacation capsules, and editorials by the time the finale rolls around. It begs the question of who’s to say what should and shouldn’t be presented at what is ultimately a B2B event, and does there always have to be some sort of grounding in reality? Questions, which suffice to say the notes didn’t answer, instead reiterating the collections inspiration as the fairy-tale Cinderella.

The retelling of the Disney story – at once performance art and simultaneous fashion show – allowed each section to work as a metaphor for a specific part of the Disney classic, for example, five mini blazer dresses were in place of the mice who were turned into horses to whisk Cinderella to the ball, but admittedly without the show notes this may have been a little lost in translation, especially for those seated outside of the main room.

The stately setting of the Palais Garnier was apt if only for the staircase which led guests up to their seats paying homage to the animated classic. After a stilted start a fairy-godmother style voiceover came over the speakers and informed us that now they had us there they were going to tell us a story, and to expect some audience participation!

Known for riffing on schoolboy style tailoring, today we got a high school update as references to jocks and American football were peppered throughout with the use of collegiate lettering. Outside of stripes and checks, this season it was all about the polka dot in mini and maxi proportions, again with another double meaning, as in a preview viewers were encouraged to connect the dots – or crumbs – which Browne was leaving a trail of to lead us here.

Known for riffing on schoolboy style tailoring, today we got a high school update as references to jocks and American football were peppered throughout

If we take the inspiration of Cinderella at face value then we can deduce that the designer truly believes in the transformative power of fashion and chose his ready-to-wear presentation to further explore his ideas so both the boys and the girls can go to the ball.