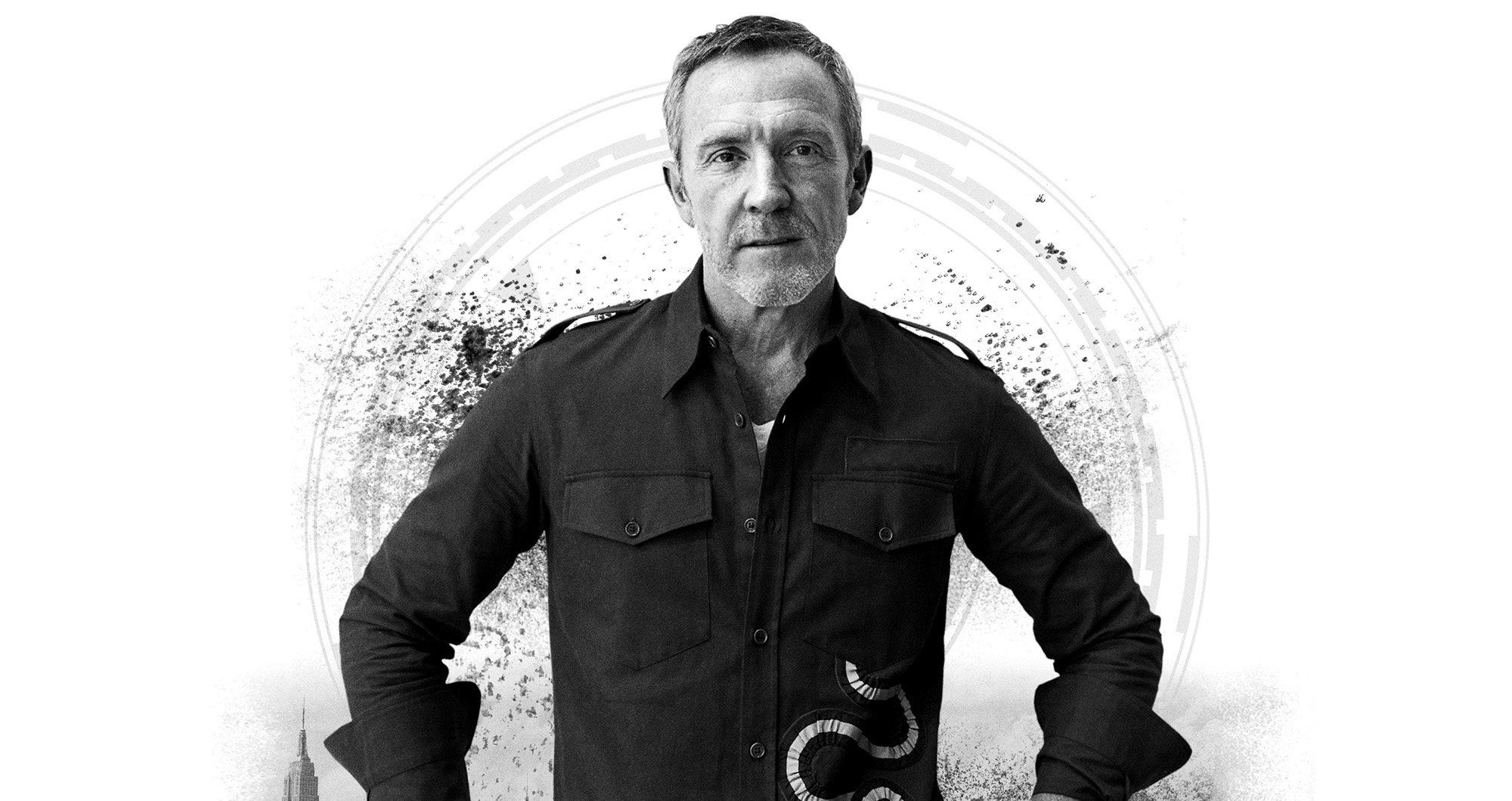 Kenneth Richard: Mind if we dive right in and hear about your relationship to cinema?
Trey Laird: I think cinema informs me both visually and emotionally. I think that’s the biggest impact that cinema can have in general – the emotional. It takes you somewhere and makes you truly feel something. Whether that’s excitement or sadness or romance or adventure, film can completely transport you. Films have always had a huge influence on me and inform my work to this day.

I think some of the earliest movies I remember were huge musical adventures like Dr. Dolittle or Chitty Chitty Bang Bang and things like that. Chitty Chitty Bang Bang was actually the first movie that I was aware of that had special effects. When that car flew, it really took my breath away! Obviously looking back at it now, it all was very naïve and very charming and done very simply – but when you were a kid, it was like, ‘Oh, my god, it’s a flying car!’

So, there were movies like that from my childhood that I remember having a huge impact on me and then, when I was a little bit older, all the James Bond movies had all this suspense and took you to exotic places full of mystery.

He was so sophisticated as a character, with this incredible sort of boldness and power.

The gadgets, the girls, the villains, the cars… I think I somehow always wanted to be James Bond.

Kenneth Richard: Classic! So, after James Bond, I imagine you later discovered art house films?
Trey Laird: Yes, in the ’80s, while at college in Austin. There was this cool, indie movie theater that would show old classics and art house movies that I thought were so inspiring. Movies like Cinema Paradiso. Also films like A Room With A View had such a huge impact on me. All the Merchant Ivory movies made you think about another time, traveling to Europe, settings that were so inspiring. They introduced me to a whole new style and amazing characters like Maggie Smith. And then there were those David Lynch movies that were so influential. There was also the classic, French cool stuff. All those independent films had a big impact on me and made me think of how themes, locations, costumes and music come together to tell a story and create an entire world.

Kenneth Richard: Did film feel different then or it was just an age?
Trey Laird: I think it was more special in the sense that the experience of going to a movie theater with friends was a shared special experience. Now we experience film in so many different ways, like on your laptop on an airplane. A film can be just as powerful as one made 25 years ago or more, but somehow the experience of it doesn’t have that same sense of specialness if you’re watching it on a phone.

Also, CGI has become so prevalent. There are certainly films where it helps, but when you look back on some of those films that didn’t have access to CGI, they had to be super creative. Like Hitchcock, in the way he shot from extreme angles and used tracking shots coordinated with music. There was such suspense in Psycho simply through the way he edited and used shadows and pauses and inner-cuts or sound effects; but now, if they re-did Psycho, it would be all be CGI.

Kenneth Richard:You speak with the cinematic vernacular of a film industry veteran. Do you and film come together often?
Trey Laird: I look at it as inspiration for storytelling. Film has been a huge source of inspiration over the years for different campaigns, stories or shoots.

When I worked in-house for Donna Karan, Jean-Jacques Annaud’s The Lover inspired one of the campaigns that we shot with Jeremy Irons and Milla Jovovich in Vietnam. That movie blew me away – Jane March played this young girl wearing sparkly shoes and ’20s dresses and it was set in Vietnam. It was literally the inspiration for both the collection and the campaign. Donna even made the shoes!

Kenneth Richard: Is there still room for that type of epic narrative today?
Trey Laird: I hope so. It’s harder to do now because the world is about quick things that immediately get attention on your phone. So it’s harder to do epic photographic stories that unfold over multiple images with all the extras, details, characters and those deeper narratives. But for the right brand, the brands that do things on their own terms and go against the trends, it could be very impactful to bring a film language into the heart of the brand. Especially with the importance of moving image in the digital and social space. I hope there’s still room for unique stories in fashion because some of my favorite work were those epics.

After Jeremy and Milla in Vietnam, we followed up with Amber Valletta and Jeremy Irons in Morocco. We shot that with Mikael Jansson and it was very similar to shooting a feature film in terms of the planning and creative coordination. We all travelled together as a group to those locations for multiple days, and had all these incredible local production teams. It was very different than many shoots today, where you show up at Pier 59 or some studio and it’s one day in and out, with everyone on their phone. When you go away with a team like that, everyone is focused, invested, creatively inspired, and all are trying to craft the absolute best story.

I think that’s much closer to the sort of life filmmakers lead when they are away on location living with teams for months at a time on set. Hopefully, there’s still room for that type of storytelling within fashion. Those two shoots for Donna back-to-back are still some of my favorite campaigns that I’ve ever worked on.

I actually felt a bit of a similar inspiration on the piece we did in this issue with Emily [Ratajkowski] and Sebastian [Faena] even though we didn’t travel. It was completely inspired by film.

Kenneth Richard: How so?
Trey Laird: Well, New York City has been a huge cinematic inspiration for me. Especially seeing it interpreted through films in so many different ways over the years, from comedies like Ghostbusters to the Woody Allen masterpieces like Annie Hall and Manhattan to the iconic films like Midnight Cowboy or Taxi Driver. I was especially drawn to some of the indies from the ’80s, like Desperately Seeking Susan. That was the first time I saw Madonna on film and there was a grittiness and an indie spirit in the film that captured downtown New York as a quirky magnet for all these eccentric characters. There were all these outrageous people just hanging out as if totally normal, and they were all obsessed with Madonna. So, I thought it would be interesting to have Emily do her thing right in the middle of all the chaos of New York City and see what happened.

Whenever we shoot her, somehow people start gathering around and looking at her. They go crazy! Tourists, paparazzi, policemen, the Con-Ed guys… It just reminded me so much of that film. And part of the excitement of New York City is that these iconic places and interesting characters and unusual moments can still collide on any given day on any corner.

You never know what you are going to see on a NYC street!

Kenneth Richard: Which plays well to film. You’ve made a number of films for clients like Tommy Hilfiger, Tom Ford & DKNY. What is your approach?
Trey Laird: Well, I think you can approach it in different ways and every project requires a different execution, but I think it’s at its best when there is some sort of story that you’re trying to communicate. It can be really simple and doesn’t have to be complex or necessarily linear, but I think you need a story! That’s when it feels like magic. Sometimes fashion films exist purely on just the visual execution, and there’s nothing wrong with that. But for me, it takes it to another level when there is a story or larger idea.

I loved all those little short films we did with The Hilfigers that were incredibly inspired by Wes Anderson and his world of characters. We put our own spin on it, but certainly have to give him a huge nod of credit as inspiration. Those were all such great little moments – from the one where the family stays up all night and puts a disco ball in the entryway to keep the party going, or the one on the boat where the father falls overboard, or the film with the family dog that drove away with the Wagoneer at the tailgate party. They were all little scenes and stories and I love creating those types of moments. It’s almost my favorite thing I get to do. To be able to collaborate with an amazing DP, or a really talented fashion photographer/filmmaker, a great cast, find the perfect music, and edit it all together. I love that and so my heart is really in storytelling that’s inspired by film.

Kenneth Richard:Storytelling is harder and takes more time than static shoots, right?
Trey Laird: Totally, if you really want to do to it at the right level. It takes character development, opening and ending scenes and transitions, and – more than anything – developing a sense of narrative. It is really about ideas. I think fashion can bring a great visual sophistication to film but without a sense of story, it becomes just something that looks cool. Again – nothing wrong with that, but it’s fun to push it further.

Kenneth Richard:So outside of storytelling, what should brands be thinking about when approaching film?
Trey Laird: I think it’s really exciting when brands partner with filmmakers and commission projects like Prada did a couple of years ago with Wes Anderson. Those types of projects keep that connection between fashion and film alive. Or collaborating on certain aspects of a film, again like Prada did when Miuccia created all the costumes for the Baz [Luhrmann] remake of Gatsby. I mean, both Armani with American Gigolo and Ralph Lauren with the original Great Gatsby used those film projects to help define their brands. It’s interesting when you see the worlds of fashion and film collide and the creative kinship between the two mediums is so rich.

Kenneth Richard: So with your passion for storytelling and love for making fashion films, any thoughts about making a feature?
Trey Laird: It’s always been sort of a fantasy in the back of my mind. I don’t know if it’s something that will ever happen, but I’ve definitely thought about it and had ideas. That’s one of the reasons why I have such respect for Tom Ford – because he actually did it! And he wanted to do it for such a long time. He obviously had such a strong point of view visually, but he also wrote the screenplays and created such compelling characters on every level. You can tell he is such a fan, student and admirer of films, and that has informed so much of his fashion inspiration over the years – but he took all of that passion and created his own film and was able to make that happen on his own terms. I have such respect for him that he just went for it!

Kenneth Richard:Twice.
Trey Laird: Yes, and at such a high level of integrity. So, yes, I’ve always thought about it, but I don’t know if that’s my path. I think I now have other things on my horizon that I am very passionate about. But, you never know. Never say never…