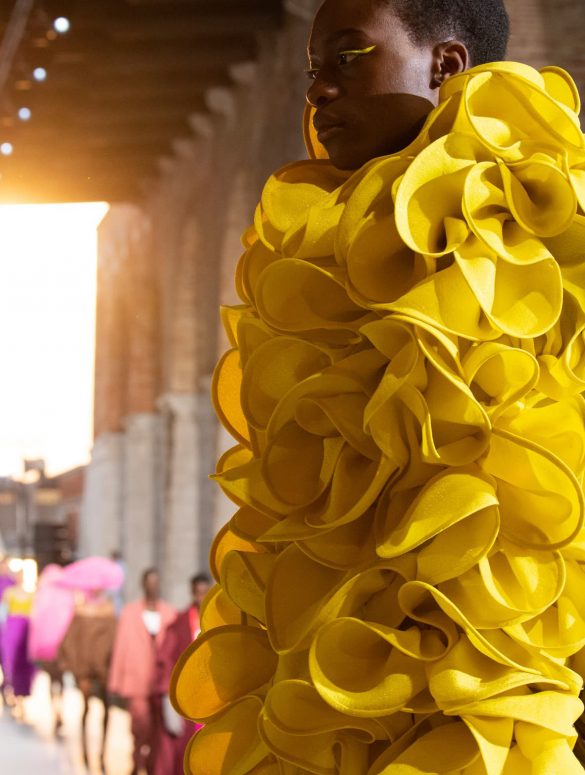 Art and Haute Couture Mingle in the Atelier, then, Clothes Gesture Majestic Colors and Shapes

“Listen to yourself. Listen to the Planet. Listen to the water. Listen to Humanity. Before the show begins, join us for a minute of generous listening inspired by Giuseppe Penone’s Olmo, brought to you by Vuslat Foundation.” That was the statement of the white letter written on the screen as the camera showed a still life frame of the Arsenale taken from the side of the seawater reflecting the brick buildings.

First built in 1568 as giant shipyards, the Gaggiandre was a production center in the pre-industrial era and the construction site for the Serenissima fleet before transformed into the exhibition site of the debut International Architecture Exhibition in 1980. Now, inside the Gaggiandre, its built-in docks provided the ideal setting with that idea of industrialism for a couture collection that paid homage to the artisans at the Roman atelier, the builder of Valentino haute couture. Valentino is also sponsoring the 49th International Theatre Festival – Biennale Teatro 2021.

A moment of tranquility endured a few minutes. Then, the first model exited onto the white walkway in a short cocoon red satin cape-dress and a large plumed hat with red feathers flying in the air behind her, opening this stellar Valentino Haute Couture live stream show from Venice. This Fall 2021 couture show closed the Fall 2021 season elevated haute couture to a new level regarding clothes, gestures, and aesthetic language.

At one end of the dock, the English artist Cosima provided the live soundtrack to accompany the models as they strode on the white painted wooden platform plank in an otherwise undecorated Gaggiandre.

Pierpaolo Piccioli has a clear mission in his work at the Valentino fashion house: to place haute couture back on the pedestal in the center sphere of fashion for this Roman heritage brand founded on the codes of couture in the early 1960s.

Piccioli’s work at Valentino has been his incredible devotion to returning the Roman fashion house to its haute couture roots, at the same time modernize this traditional fashion language and gesture, and adapt to a current world with radically different audiences and values. And, these welded tenets today are more and more about progressive social views forged experiencing the shared struggles of minorities and plights of their peers. They are pervasively reflective in many recent brand projects fomenting these new values into Valentino’s fashion vision.

The pre-show teaser short video on the brand’s Instagram showed one of the Rome atelier artisans at work embroidering a white garment with a light grey pattern with a quote.  “Art is purposiveness without purpose” – a line from the German philosopher Immanuel Kant’s 1790 The Critique of Judgment. The late eighteenth-century German philosopher, a central figure of Enlightenment, was not the kind of thinker often quoted by fashion houses.

Kant said that fine art is purposive in itself but, even without an end, still indulge in the cultivation of the power for social communication. As such, judgments of taste are also subjective and universal – here perhaps meaning that the art of couture is personal as it responds to the pleasure of the clothes and universal as social goods of value. We can appreciate the sublime beauty of couture without finding some actual use or even a purpose of these clothes.

Another teaser shows another artisan working on a dress on a mannequin form horizontally placed on the white table with the comment ‘the hands that learn, test, collaborate, and create.’  In a Kantian way, these hands that helped craft these couture clothes are part of the material creators for a universal beauty ideal and the reason to call this collection ‘Valentino Des Ateliers.’

What are the gestures from any fashion brands that can be equivalent to the same nods that elite football players like those in the England team did as the young players took to their knees before each of their delayed Euro 2020 matches? What are the new values say in haute couture that can link to a young generation?

Piccioli’s answers here are to involve a new generation of young artists, mainly painters around the globe, and brought them to Rome to interact with the artisans at the couture atelier. The designer hoped that by bringing together these artists and craft people from different realms of art and fashion, a conversation could start then can lead to working together, merging the painter’s idea and the craft into a three-dimensional haute couture dress. The hands of the artist and the hands of the atelier performed the same artistic tasks, now combined to foster a new work that can wear in real life.

The search for new ways of working the traditional haute couture tropes, giving today’s twist to the romantic femininity, well now adding masculinity to Valentino’s language of high fashion. This season, in a tribute to the Venice Biennale, there’s an added element of art.

Alessandro Teoldi, the 34 years-old Italian artist, worked closely with textiles, sculptures, drawings, and paintings.  He merged his painted images of human hands into intarsia with interwoven images of hands directly translated by the atelier from the Untitled 2020 paintings on the purple and white day coat and dress with engravings of wrists and a strapless red gown with large visual of hands in movements.

In between the garments crafted together with the artists, the audacious colors and the seamless workmanships that never showed on the perfectly cut garments are the base elements behind this couture collection that feel as light as those plumes on the circular hats that swayed in the air behind the models.

The French-born Anastasia Bay transferred her bold color abstract figurative work onto a white asymmetrical cut long dress with deep purple, red, blue, pink, and emerald green abstract shapes. The English Jamie Nares deployed her single brush strokes from her paintings like one of her blue brush paintings, ‘It’s Raining in Naples’ onto a collarless A-line white coat and a long dress decorated with giant red brush strokes along the length of the cape and dress. The German artist Malte Zenses concocted graphic lines into abstract dots and lines on a cashmere, belted ecru short jacket, and matching skirt.

The vibrant colors – the bright pink of a shredded fabric corset top, the light and dark Fuschia pink of a single breast coat and long dress, the shiny violet of a turtleneck overhead cape dress, the light emerald of a long asymmetrical dress, or the marigold of a fitted sleeveless short sheath dress – reminisced that magisterial haute couture spring 2019 show in late January 2019 in Paris or even the especially with the voluminous ball strapless corset gowns in red pleated silk or the Van Gogh yellow taffeta gown with fly away puff sleeves emerging at the end of the show.

The silhouettes veer from lean and short to bubble and voluminous. That a pink long sleeve tee-shirt paired with green hot pants and a feather hat feels as haute couture as those voluminous evening strapless ball gowns more typical of couture garments is a demonstration of how Piccioli has fine-tuned his sense of what is and should be haute couture today.  The designer has tossed aside much of the encumbrances and heavy embellishments of the past. There aren’t any excessive embroidered garments in this show, for example, save for perhaps minimally in a silver corset and matching hot pants.

The grand ballgowns in yellow, red, violet and light pink are the expected drama from Piccioli. Still, unexpected is the short and cropped mini dresses like a black sleeveless sheath, a pale pink bubble dress with a feather cape, or that neon yellow micro dress with a mauve plume hat.

Here and there exist the tensions between making a couture collection that is more ostentatious and more embellished versus this collection with its focus more on fabulous day clothes rather than evening clothes. Real-life proportions for daywear are the new propositions expressed in a new way of harmonizing colors in a Matisse blue taffeta short, with a white tee shirt and a long intarsia pattern coat. The aqua blue flare cape and long blue dress pushed the limits of daywear still in vivid colors. However, there are plenty to choose from in the array of evening gowns shown.

The couture menswear introduced last season has taken on a life of its own, and this time has greatly expanded into more looks shown, but mindfully with a lean proportion with skirt panels enveloping one pleat-creased pant. The light pink cashmere scarf coat, light pink shirt, and Fuschia wool pants opened the strong men’s couture clothes. It is dominated by its minimalist streak in actual clothes streamlined, luxurious and far from showy, perhaps a little with the ornate silver cardigan or a blue feather plume jumper.

The men’s tailoring is lean and linear. An aqua blue cashmere shawl collar jacket has a matching panel skirt, pants, a light blue shirt, and a sparkling tank top. A pale orange no button single breast pantsuit has a slight flare jacket cut on the side to function as a cape. There’s softness and sensuality to the men’s clothes with the combination of colors and sharp cuts, clothes that comfort the body. These men’s clothes are sumptuous and seem right for this moment.

As the models posed at the end of the dock platform and the camera mounted on the drone flew higher, giving a panoramic view of the models forming a standstill tableau, there is something majestic to the vibrant and brilliant bursts of colors and shapes viewed from above. There is also something magisterial to this momentary living painting, something that in fashion perhaps only haute couture can achieve, especially haute couture at Valentino.