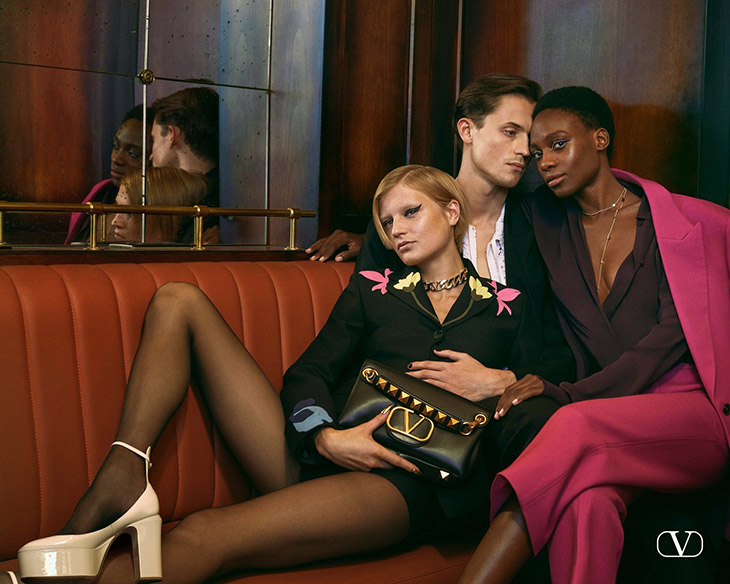 Valentino celebrates physical presence and all the possibility of connection it suggests in a gorgeous new Resort 2022 campaign by director Pierpaolo Piccioli and photographer Michael Baily Gates.

Blooming with all the subtle, sensual drama of nonverbal human connection and communication, the campaign is a gorgeous celebration of the world’s return to the physical. Set in the communal space of an elegant Parisian cafe – the door, patio, and windows of which allow for some nice visual interplay of interior and exterior – the film focuses on moments of noticing and connection between its characters. Sometimes it’s something as simple as reveling in the joy of people watching, recognizing something in another person’s face or the way they sit; while other times it’s a moment of eye contact or touch that suggests the subtle but unmistakable charge of the erotic. A saxophone-tinged dreampop soundtrack supports the sense of the romantic.

After seasons of being trapped seeing others on a computer screen, this excitement of real physical connection feels so needed.

His photographs hum with the harmony of color and composition of a masterfully painted portrait.

While the moments it focuses on are small and ephemeral, the campaign does a beautiful job in conveying the grandiose emotional movements behind them. Expressing this energy through the romantic and colorful visual language of Valentino, it feels like the perfect celebration of the world’s renewed possibility for life and love.