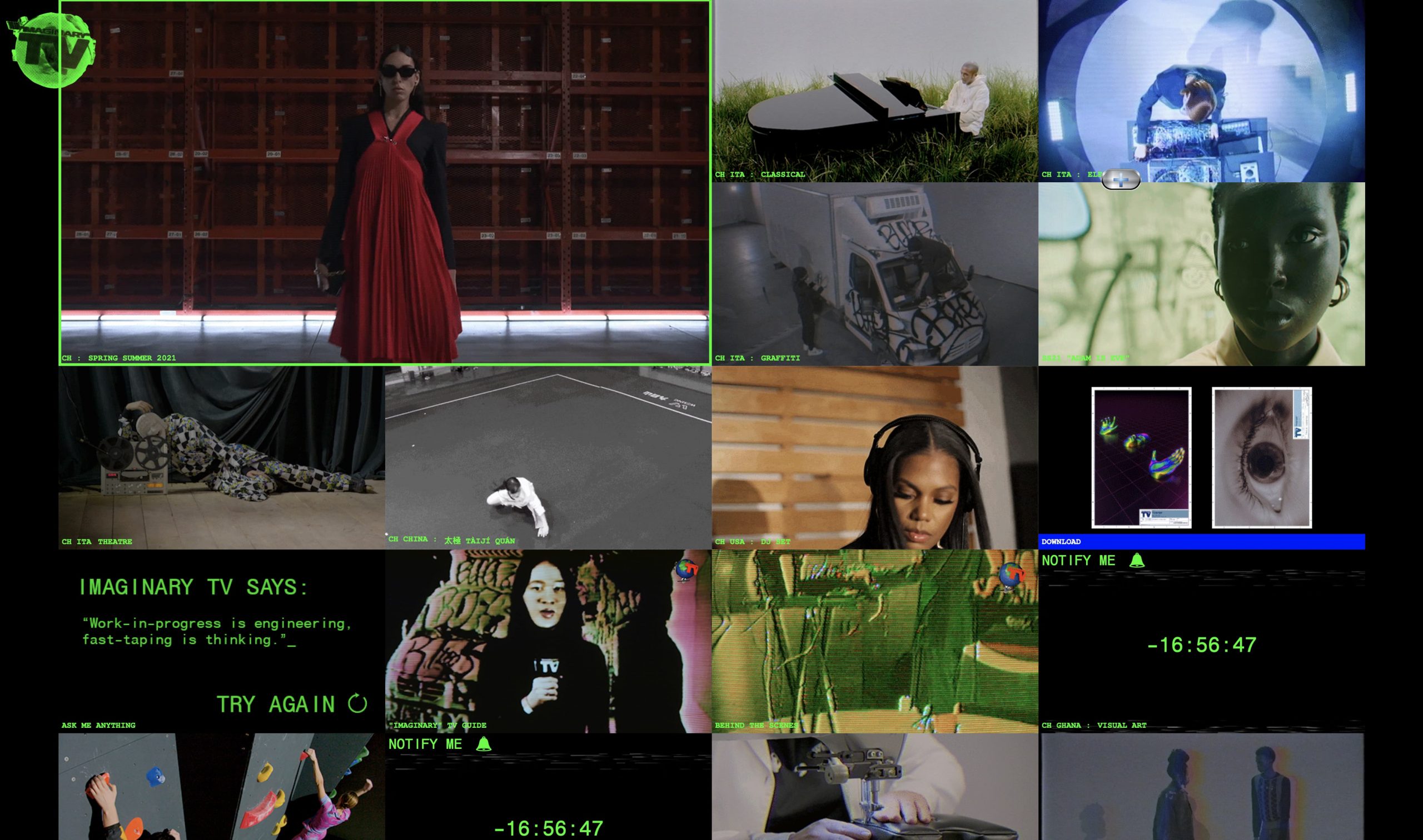 Always ahead of the game, Virgil Abloh has unveiled a unique new broadcast platform called “Imaginary TV.” The platform will occupy a dedicated space on the website of Off-White, the label that Abloh founded and leads. There, fans will be treated to a continuous stream of video content, ranging from Off-White’s Spring 2021 show, which inaugurated the broadcast, to music and art performances, skate videos, documentaries, and more, all handpicked by Abloh.

Though the format hearkens back to 90’s-era MTV and similar channels that were formative parts of Abloh’s upbringing, the approach feels revolutionary. The current social-media landscape is dominated by discrete, bite-sized nuggets of content, all competing for precious moments of your attention. The continuity and holisticity of Imaginary TV is an intentional reprieve from the fractured nature of this social-media spectacle. While the various programs offered are quite diverse, they all fit into the progressive and somewhat fantastical creative world that Abloh has spent his career developing.

Off-White is seeking to become something more than just a designer or a brand. Like early MTV or a favorite radio DJ, Imaginary TV is a platform for creation and discovery, and we don’t know what it will show us next. This element of surprise and discovery has been largely missing in the age of algorithmic feeds and on-demand streaming. But, unlike MTV and thanks to the conveniences of the streaming age, the Imaginary TV player allows one to start each program from the beginning.

Occupying a unique space between streetwear and luxury fashion, insider and outsider, Off-White has always felt uniquely democratic. More than many other brands, its image is defined by its fans. Imaginary TV expands this principle, creating a free space where anyone with an internet connection can participate in, or at least witness, the exciting creative world that is Off-White. A more negative perspective could see it as an easy way for Abloh to get some free advertising, but his genuine dedication to supporting artists seems to prove him above such a middling money grab. Either way, it probably will contribute in interesting ways to the breaking down of the dichotomy between advertising and “actual” content – all of it just becoming “content” – that is playing out across the media.

We wonder how long-term the lifespan of the platform will be. It’s possible that Abloh only keeps it around to support the Spring 2021 cycle. However, he seems to have only scratched the surface of its potential so far – it’s not hard to imagine film premieres, exclusive concerts, or even new hybrid forms having a home on the platform.

If he does stick with it, we think it could become one of the most culturally important spaces on the internet, and spark a revolution in how we engage with creators and creative spaces.