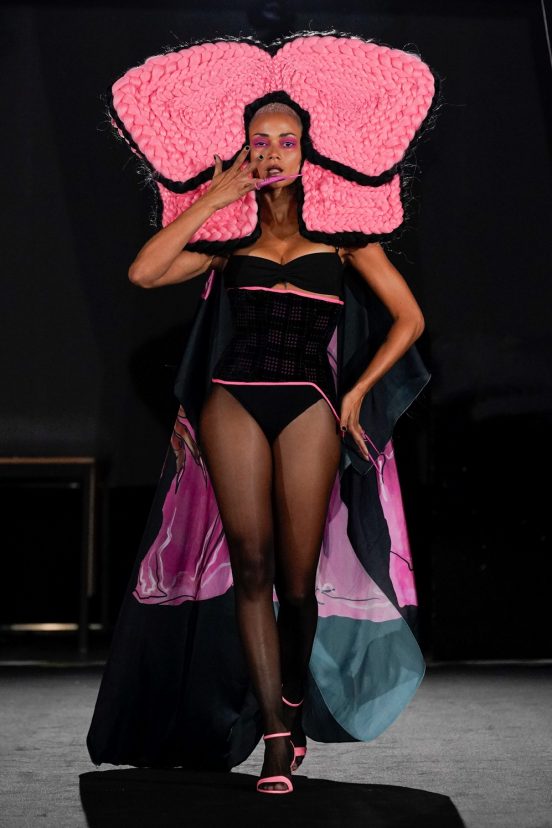 Now, that’s a show. The stage set the tone of a playhouse, where everything is wondrous and possible. The opening sounds of Alsatian children gave the clue to Victor Weinsanto’s inspiration for this collection. As he disclosed after the show: “It was all about my origins. I come from Strasbourg, in Alsace, it’s a lot of big hats, Alsatian craft, costumes, corset, blouse, pretzel. I wanted to take what we think of Alsace and put it into garments, but in a totally different way.” There were the typical clogs and bags in the shape of Bundt cake, pretzels as headpieces and necklaces.

Weinsanto also said it was playing with the codes of dance and cabaret, which sounds like the brief the performers got because that’s what they delivered. The show opened with a pair of ripped men in overalls, a familiar throwback to Jean Paul Gaultier, whom he worked for on the Fashion Freak Show and who is one of his fashion heroes, along with Thierry Mugler. All of this comes through in the staging and performative aspects, such as the dancer in glitter-studded briefs with fluttering wings (which Jacquemus seemed to enjoy). Also in the theatricality and camp – which is meant in the best way. The playful sexuality is grounded in a confident embrace of fluidity, positivity and diversity.

Known for fantastic headpieces, performative silhouettes, bold colors – in short, attention-grabbing pieces not for the wallflower personality – Weinsanto has taken it to another level this season in whole-body looks. These are looks for the red carpet, the ballroom, but also the metaverse.

That said, Weinsanto doesn’t just do demi-couture showstoppers, but also offers wearable looks. He gave the Canadian suit a fun makeover in jeans that are slit to the waist, a jean jacket with a new silhouette, and a gorgeously shaped dress. Not sure what the treatment is on that denim, but it’s cool.

There’s also some nice tailoring on the dresses. All in all, this show is what we’ve been missing the last year and a half. A lot of people try to incorporate performance into their show, to varying degrees of success or cringe. This worked because it was holistically befitting to Weinsanto, his aesthetic, his universe, and you can’t fake authenticity.