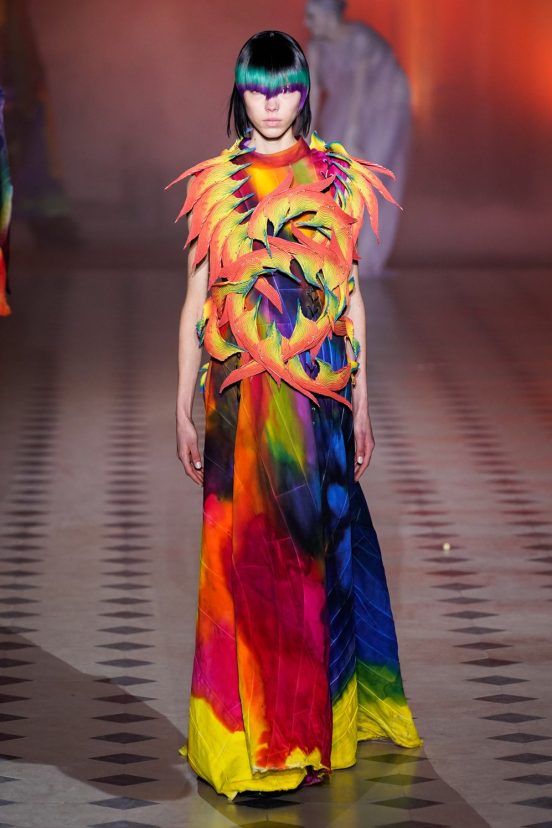 The title of Yuima Nakazato‘s Spring 2022 couture collection, “Liminal,” is an aptly chosen one. In its techniques and materials, the work exists between fading, historical techniques whose results proudly bear the marks of their process, and futuristic, far-seeing technological developments whose origin seems unguessable. Conceptually too, the collection’s inspiration is a place between color and darkness, birth and death, temporary and eternal.

Nakazato’s androgynous models emerge from a cloud of fog, surrounded by two-white clad dancers who seem like shepherds of souls, stride across the floor, then are beckoned back to the underworld. The reflective and ephemeral soundtrack, iconic Japanese avant-garde musician Ryuchi Sakamoto’s “fullmoon,” features a sample of a quote by author Paul Bowles: “But because we don’t know, we get to think of life as an inexhaustible well. Yet everything happens a certain number of times, and a very small number, really… How many more times will you watch the full moon rise? Perhaps twenty. And yet it all seems limitless.”

We are reminded that we exist in a delicate balance, shown through shape and color the fleeting preciousness of our life in the world.

In terms of structure and silhouette, the collection is not as fantastically involved as some of the elements we’ve seen from the designer before, which have included elaborate headdresses, cosmic eggs, and intricate boro assemblages. In fact, much of the collection was unstructured, with the flowing shapes of kimono-influenced robes and jackets determined by the tendencies of the fabric itself, and held together by minimal but precise, and often visible, stitching or lacing.

The embroidery on these pieces is executed with a sewing machine, using a homebrew Japanese technique that was used to personally illuminate one’s kimono, and has begun to fade since the style is no longer widely worn.

Lacing is also used to bring fluid texture to bunched fabric, with the laces being left to dangle beyond the hem of each piece, creating a thoughtfully architectural sense of visible process and construction.

Towards the end of the collection, these bunchings of fabric and the silhouettes they create expand in size and character, undulating into flowing, accordion-like shapes that bounce and flow with the movement of their wearer.

While it has largely characterized many of his past collections, Nakazato’s Biosmocking technique only made a few appearances in a supporting role this time around. The technique begins with brewed protein fabric, a synthetic protein material produced through a microbial fermentation process. A biobased, microplastic-free and animal-free material, its physical properties can be controlled by designing it from the molecular level. Biosmocking leverages a specific type of Brewed Protein fabric. Harnessing the unique property of Brewed Protein where it shrinks when it touches water, by precisely controlling the shrinkage by digital printing technology, Biosmocking enables the house to create a super complicated three dimensional fabric from a flat rectangular fabric, without producing any waste.

The technique is used here to create intricate, mantle-like pieces that are worn over a dress. With colorful forms that recall at once a nudibranch, an exotic plant, and an alien craft, the pieces are a powerful embodiment of the collection’s synthesis of organic and technological. “

While some of the collection lacks the same creative grandeur we’ve come to expect from the designer, it’s another strong example of his singular synthesis of fantasy, craft, and futurism. Despite its perceived traditionalism that many designers perpetuate, couture is a fertile ground for experiments in technology and sustainability, and we’re happy to see Yuima Nakazato lead this charge with such imagination.