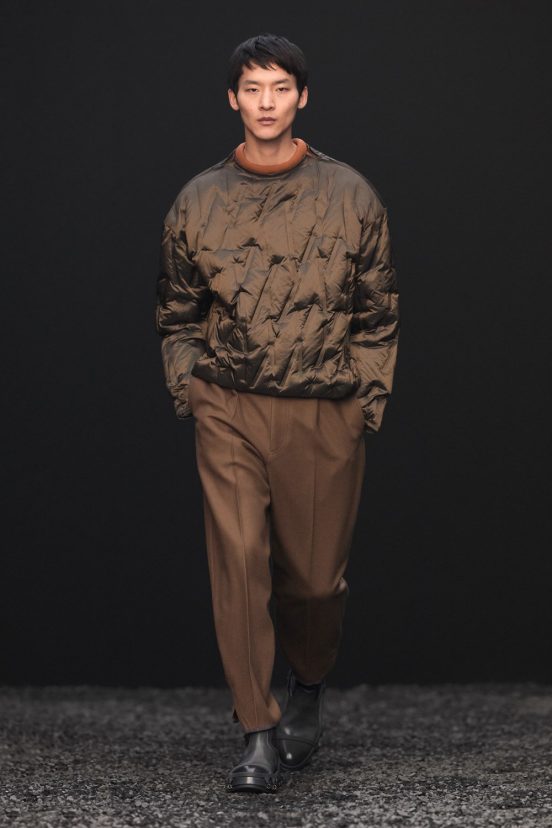 Zegna has been going through some big changes. In the past year, the brand dropped the historical “Ermenegildo” from its name and rebranded with a new logo, and debuted as an IPO, going public on the New York Stock Exchange. The first manifestation of this rebranding in terms of the actual design of the clothing was thus highly anticipated, and creative director Alessandro Sartori did not disappoint.

Titled “A Path Worth Taking,” the hybrid film and physical presentation took as its starting point the road that originates in the mountains near Zegna’s headquarters and runs through Oasi Zegna, the free-access natural territory in Piedmont, Northern Italy. Abstractly represented in the brand’s new logo, it functioned throughout the film as a visual metaphor for the consistent path from the brand’s founding and into its future.

The push to honor the history of the brand while reconsidering what it means today is thoroughly present in the collection. While the brand’s first small release after the rebrand, its small Winter capsule, took a more familiar technology and performance-first approach to mountain-ready outerwear à la Arcteryx, the new collection succeeds in embodying Zegna’s commitment to moving forward by completely synthesizing performance outerwear with the silhouette, look, and touch of refined luxury.

I keep looking at the world through the Zegna lens. The reality we live in today requires adaptability; it
asks us all to be fluid. Translating this idea into clothing means building a language of shapes and
textures that grows and consolidates over time, matching the needs of the moment. The notion of the
hybrid is one I keep exploring, because there’s progress in erasing staid categories.

The categories are familiar: suits, cashmere sweaters, trench coats, anoraks. But within these established forms, new, technically minded ideas of how these pieces can be incorporated into the motion of life manifest and proliferate. Subtle cinches offer modular styling options by bringing in the silhouette; zips appear across shoulders and hems. A Chelsea boot is crafted in rubberized leather and neoprene.

On a few pieces the mountaineering references are more overt, like the puffer sweater and pants or the boot with ice cleats.

Still anchoring the collection is the suit, refocused through this haute-hybrid versatility. Over his ten years at Zegna, Sartori was largely responsible for introducing today’s world to relaxed suiting, and remains its master. In his presentation of the collection, the creative director broke down the idea of the suit into its most essential elements, a three-part framework: the jacket, what’s underneath the jacket, and the pants. Each piece is executed in the same material – including a “performance wool” that is machine washable(!) – at different weights, with the jacket being the heaviest and the pants the lightest. Not a single tie is to be seen; jackets go over their matching stand-collar shirts or angularly zipped sweaters, with turtlenecks as the base layer under most looks.

Also a strong focus of the collection was knitwear. Inspired and characterized by the art of mending, cashmere sweaters are patched together with visible seams, creating a well-crafted, wabi-sabi ode to change and renewal – as well as a piece that is visually beautiful and incredibly cozy.

The collection’s deftly restrained color scheme also marks the debut of the colors that will return for each of Sartori’s collections moving forward: ecru, black, grey, “vicuña” – the rich orange of the brand’s new logo – and a rotating seasonal color, which this time around is aubergine.

Another first, the collection launches the beginning of Zegna’s offering a single collection each season, streamlined from their previous three. This move is no doubt part of the reasoning behind the perhaps slightly more commercial feel to the collection; it needs to appeal to a wider range of potential consumers, and much of it does seem to court fans of the ongoing elevated technical outerwear trend.

But the campaign’s accessibility, flexibility, and hybridity – both in its overall shifts from refined to rugged and in the styling modularity and of single pieces – also represents some smart thinking on Sartori and Zegna’s part about how to remember where you came from while responding to the shifting landscapes of life in the moment. Rising to this challenge with focus, innovation, excellent craft, and a subtle sense of emotion, Zegna invites us along an exciting path forward.