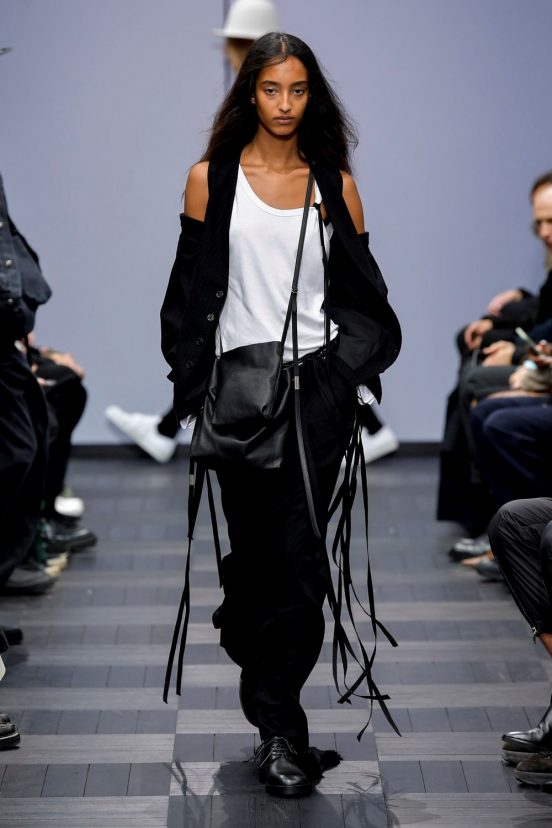 The Ann Demeulemeester SS22 collection was titled Lightning Over Heaven and heralded “A new light | A new energy | A new era.” This new beginning was not just one of post-pandemic reemergence, but triggered by a total overhaul. Sébastien Meunier took his final bow with the FW 2020 show and Claudio Antonioli, cofounder of New Guards Group (the streetwear conglomerate behind Off-White, Palm Angels, Ambush and the like), took over the brand. It is his passion project as she was professedly one of the most important designers in his life (they go way back to the 80s). So it’s important to him that the unique Demeulemeester DNA be honored and has coaxed her to return to her eponymous label as top adviser and guiding star. While Meunier was her deputy designer for years before her “retirement” from fashion in 2013 and had been groomed to take over the reins, he eventually developed in a direction that was probably more glam goth or morbid than Antonioli felt appropriate for the house and hence the course correction.

This collection was designed by a new in-house team as a new creative director has not been named yet. They revisited what was probably her most iconic collection, SS98.

The whole show was black and white variations on her staples – white shirt, tank top, vest, pants, blazer, coat, long skirts and gowns, accessorized with arm warmers and bowler hats. If you look at the team’s last collection, a moody film set in an empty mansion in the countryside, it’s basically the same, in a lighter atmosphere, lighter fabrics, with more fluttering straps and a slouchier fit.

The black ribbon in Demeulemeester’s original designs is an integral part of the construction of the garments, giving them their signature shape and fit. The play with them here is supposed to symbolize her handwriting on a blank page, as well as the words written on the models’ faces.

Is it very Ann Demeulemeester? For sure. Will it sell? Probably very well. But a fashion show is an opportunity to express a vision, tell a story, dream a dream, which Demeulemeester always did. And it feels like the design team are in a holding pattern. In an age where luxury brands are onboarding streetwear designers to appeal to Gen Z and down-ageing is the brief du jour for creative directors, it is an interesting move to return to the roots, and I am curious to see who will helm the house next. True fans are certainly hoping against hope that it will be the legend herself.