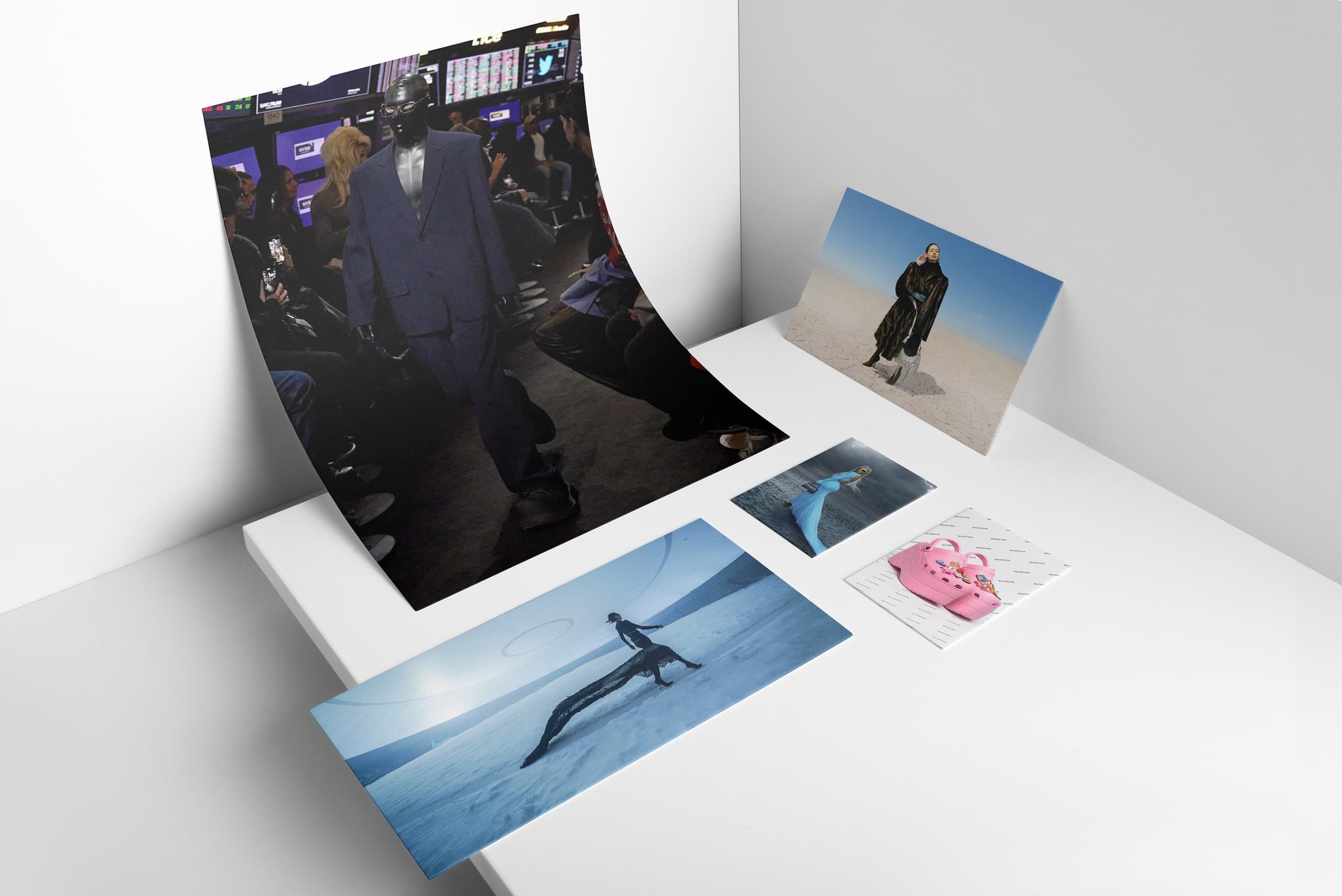 Balenciaga is probably the coolest, most desirable label in fashion today. Not only is the brand acutely aware of this status, but it has built its current image on capturing and subverting desire itself as it exists in our present moment of cultural consumption.

For as much as the brand seems interested in the future – it explores and effectively uses new communication and creative technologies, and has contributed to projects dedicated to social progress – Balenciaga is distinctly focused on the present. Moreover, the brand embodies a present in which the future looks unclear, unimaginable. Shirking newness in favor of repetition, parody, and deconstruction, the brand taps into a zeitgeist that sees real change as impossible – what conservative political scientist Francis Fukuyama called “the end of history,” endorsing our current state of western liberal democracy and global capitalism as the final stage of humanity’s ideological and political development, or, on the other hand, what leftist philosopher and critic Mark Fisher concernedly called “the slow cancellation of the future,” famously identifying as a characteristic of our reality that it’s easier to imagine the end of the world than the end of capitalism. While history certainly hasn’t ended, it is true that in many ways the future looks bleak: looming environmental catastrophe, nuclear proliferation, widening financial inequality, endless wars.

Nobody is more aware of this precarity than Gen Z. Not only have they grown up in a world that feels more fractured and with a future that feels more uncertain, but they have the digital technology and social media platforms to ensure that direct knowledge of the symptoms were always at hand. Social media has the dual function of reminding us that our situation is inescapable, that there’s practically nothing an individual can do to change the world, while giving us the ability to communicate with others about this reality and to express our own individuality in response to it. The only way to address the end of the world is to joke about it, to make memes about it, and the only avenue that seems available to us is to enjoy this world while we can.

This attitude of indulgent indifference has bubbled upward, affecting popular culture at all levels. Nobody in fashion is capturing it better than Balenciaga.

Creative director Demna expresses this culture of decadent inaction by incorporating design principles of repetition, deconstruction, and dysfunction. Demna pushes to the extreme the idea of luxury as the privilege to be purposeless by taking items that are created with function in mind and draining them of their functionality. Balenciaga’s trash bag pouch transforms one of life’s most quotidian and necessary chores into a cheeky statement of luxury and self-aware style, literally embodying the phrase “disposable income.” Similarly, the house’s ongoing collaboration with Crocs – which, though made out of the same material, cost dozens of times more than the standard clog – transforms an icon of accessibility, flexibility, and function over form into a tongue-in-cheek symbol of a leisure class.

But Balenciaga is acutely aware of the irony of this luxury of uselessness, as evinced by its recent sneaker campaign that featured utterly destroyed and decayed versions of its star footwear pieces. The brand’s image is conversational; it invites us to escape and to indulge in this world of inaction, of abstraction, of pure luxury.

The lack of functionality and practical reality inherent in the brand’s approach to design is replaced with supreme desirability. To own a Balenciaga piece means not only to be involved in the current of cultural conversation, but to wink at it, to revel in consumerism while spurning its consequences.

Buying Balenciaga means either you’re in on the joke, or you’re the one being made fun of.

The line between the two is often difficult to see. Contradiction is at the core of the brand’s identity. It critiques capitalism while thoroughly and effectively participating in it; it embraces newness and technology while repeating and exaggerating old ideas; it parodies the cult of celebrity while lovingly casting mega-celebrities.

With its cultish evocation of the intersection of desire, technology, and systems of exchange, Balenciaga’s Resort 2023 show – held at the New York Stock Exchange – was an incisive expression of its commitment to the esoterically alluring contradictions of contemporary consumerism. Against a backdrop of eerily glitching digital stock counters that seemed to suggest economic collapse, the latex gimp suits worn under iterations of bourgeois sophistication or hypebeast extravagance made their message strikingly clear: money is the greatest fetish of all.

The house’s most recent runway show saw its models walk through a bombed-out mudscape, making for a glaring and bleak criticism of this century’s endless wars – an message that was eerily offset by the celebrities posing in front of this nuclear crater.

Similarly reveling in an aesthetic that elevates an anticipation of doom into an image of aspirational, aloof luxury, the brand’s recent Winter 2022 campaign picked up on its corresponding runway show’s themes of bleak futurism, environmental catastrophe, and manmade weather events. The imagery saw its models stand stoically before a broad range of meteorological backdrops, ranging from the mundane to the dystopian: scorched deserts, the beach, icy tundra, a city in a snowstorm, an endless seascape shrouded by haunting clouds and lightning. Against these settings, the Kim Kardashian-led cast cut striking silhouettes in their mostly all-black and entirely weather-inappropriate Balenciaga fits.

The campaign was a smart and fitting – though ominous – continuation of Balenciaga’s consideration of dystopian futurism and environmental precarity. The runway show sent its models trudging through an artificial snowstorm, and here the house explored further facets of man made environmental horrors and the decadent paradoxes of our late capitalist moment. Are these characters living in simulated environments in a technologically augmented future? Are they an elite class who have had the privilege of retreating into virtual reality while the rest of the world starves and burns? Or have they miscalculated their outfits and found themselves in a real world that is irrevocably, unrecognizably changed?

What is both frustrating and exciting about Balenciaga is that they don’t answer these questions, instead choosing to build a mysterious and undeniably cool aesthetic world out of these tensions. While the brand is eager to point out the fetishistic and destructive nature of consumerism, they don’t kinkshame; indeed they celebrate the pursuit of success within the system and the act of using these cultural currents as a means of personal expression and liberation. Whether this approach looks cynical and irresponsible or is a powerfully relevant artistic and empowering response to a complex time might depend on who you ask, on the day. Whatever the future holds – climate apocalypse, financial collapse, nuclear winter, computer consciousness, high-fashion utopia – Balenciaga will be looking cool and making it look effortless.