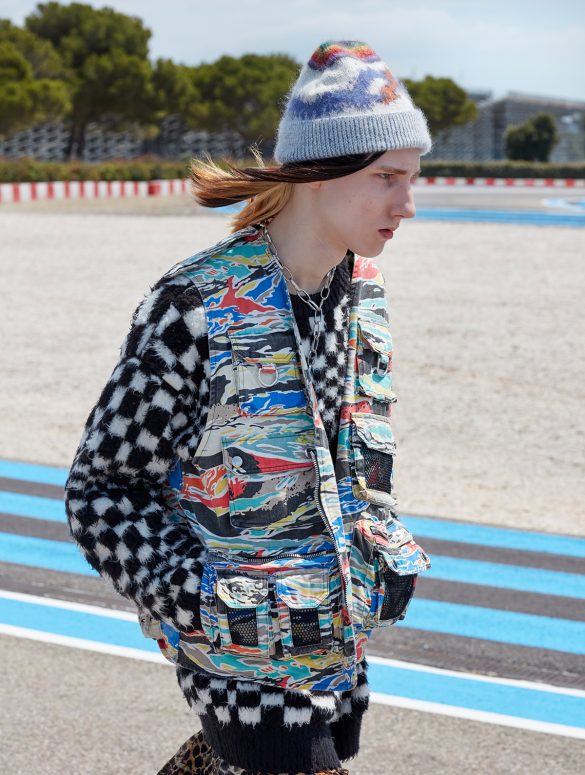 Living on Celine’s Instagram for the last five days, the ‘Dancing Kid’ is presumably this skinny tattooed young guy with blond hair wearing just a pair of torn jeans and sitting on an old floral jacquard sofa in the middle of a countryside field of dried grass casually painting his hand nails with an ice blue nail color. From this initial look, there is already something familiar in the same way a person feels about coming home after a short absence.

But diving a little deeper into Celine’s Instagram, there in the archive of recent stories is a compilation of the TikTok posting from four young kids, young teenage skateboarders to be precise with their online handle @curtisroach, @luvaanthony, @lilhuddy and @noeneubanks, wearing big tee shirts, sweatshirts, and underwear bearing the Celine logo. They are part of the new exhibition ‘Portrait of a Teen Idol’ that the designer Hedi Slimane has recently photographed in Saint Tropez.

“The concept for The Dancing Kid took hold in December 2019. Attuned to new adolescent codes, Hedi Slimane photographed Noen Eubanks in London. It became the start of the ‘Portrait of a Teen Idol’ series,” stated the press notes on the genesis of this stand-alone men’s presentation after the decision to combine fall 2020 into a coed format shown at the end of February. At the time of the announcement to combine the fall 2020 shows, the brand left room for future separate shows if the direction of the collection warranted.

The show is meant as a “documentary collection spanning eboys and current skate culture, a candid portrait of a generation that took advantage of the confinement and isolation to assert itself and emancipate itself creatively, spontaneously inventing an initiatory language anchored in dance and teen romance.” But don’t take the brand’s words at its face value. Just check-in at TikTok and all of this is right there for anyone who cares to see.

The video presentation that went live today was filmed from a live show on July 13th at the car racetrack Circuit du Castellet built-in 1970 near Marseille and currently hosting the French Grand Prix. The clothes in the show are more relaxed and a bit more casual as well as a bit less formal especially in the opening looks that set the ambiance for the collection – black sleeveless biker, stripe turtleneck, logo tee, and spotted pants or pattern cardigan, logo underwear and floral sweat shorts or multicolor patchwork leather, leather silver sweat, and brown sweat pants – than say the more strict style of the English boys from the first men’s runway show in January 2019.

The mood reflects more of the Marseille laissez-faire atmosphere and vibe than that of a stricter Paris environment, more so with the melodic sound from a specially made version of ‘My Name is Tiago’ by the Canadian rapper Tiago Garcia-Arenas aka Tiagz.

While tailored look take more of a back seat, they are nevertheless present and worn in a more casual manner like the charcoal chalk stripe suit paired but a black turtleneck and white tennis sneakers or a light brown plaid single-breasted jacket worn with grey pleated striped pant and white tuxedo shirt under a black wool jumper.

Taking the show looks apart, there are a lot of great items – pleated pants, a range of leather jackets including the black multi-zippers bikers, the black round metal dotted leather with Dancing Kid letterings or the grey leather flat shoulder sleeveless jacket, the array of cardigans, the staple torn jeans, and the baseball blousons. The white leather purse paired with a gold star embroidered brown wool striped cardigan and brown plaid pant is one of the few accessories shown and a sure seller comes spring.  The velvet blouson embroidered with multicolored palm even sparkle at night.

While it is not hard to find relics of the skate culture here and there in the clothes, say a large black sweater with embroidery of open large red lips and white teeth biting a gold thread Celine logo or a red sweater with clown motifs or those flat white sneakers and the Celine Z trainers, the collection seems less concern with the specifics of this youth subculture than with what young people would want their clothes to look and feel in the post-crisis era. The casual feel here does not mean the collection is verging on the street-wear ethos. It isn’t.

Slimane has always had a masterful feel on the pulse of youth culture and understood the precise moment to move on as the subcultures evolve. It isn’t so much the focus on youth culture – it is because what eventually affect pop culture at large often have roots in various youth movements. But it is hard to simply dismiss Slimane’s ability to create a cultural aura around basic essential well designed and well-made garments.  This remains one of the most difficult norms to achieve and it is what separate luxury from any other categories of products.

While skate culture has been mined at great depth by the fashion industry both in and out of luxury, Slimane’s treatment here isn’t the same as he is directly involved with the protagonists whom he portrayed and he absorbs how they live. Slimane, in his fashion or his photography, has never just taken or borrowed from any of his underground subjects without those subjects being front and center to his work. One can question his takes of the skate culture but one simply cannot dismiss the sincerity of heart he brought to each of the projects. The kids have a say and a voice in a major not minor way as indicated by their TikTok compilation. They are empowered.

What is the value of a designer without a point of view? As I was watching the presentation on Instagram, I noticed the same public reaction – it’s love or hate and not much in between. In my experience, only very good designers can bring forth such opposite reactions from any audience.  The middle ground, well that’s simply dull and who would want that in fashion.

Yet apart from what is seen with the fashion show clothes, Celine has a large reservoir of commercial products that filled in between the range of show clothes destined for stores.  After every shows in Paris, most editors are invited to re-see the collection that included these more commercial oriented clothes and at times the commercial section take up just as much or more space in the temporary display showroom.

Recently the huge BLM protests brought about many changes to the different facets of structural inequality. In fashion that comprises looking at not just the corporate side but also at the image-making side of all the brands for adopting a more diversified and inclusive image campaign. In particular, the influencer Bryanboy has been vocal on Instagram in calling out Celine’s lack of diversity. While that is true and the brand as a large luxury company should adopt a diversity platform in all of its endeavors, is it fair to say that a particular aesthetic or taste is perhaps racist?  I am not certain one can readily draw that kind of conclusion at least on a personal level.

While some of Celine’s past ad campaigns have been criticized for their lack of diversity, the just-released Plein Soleil capsule campaign featuring the French model Essoye Mombot and the Gold Metal sunglass campaign with model Mountaga Diop is a start in this new direction.

That said, the casting of this show reflects this need for diversity. The same can be said for the range of great clothes, separately or all together as shown.