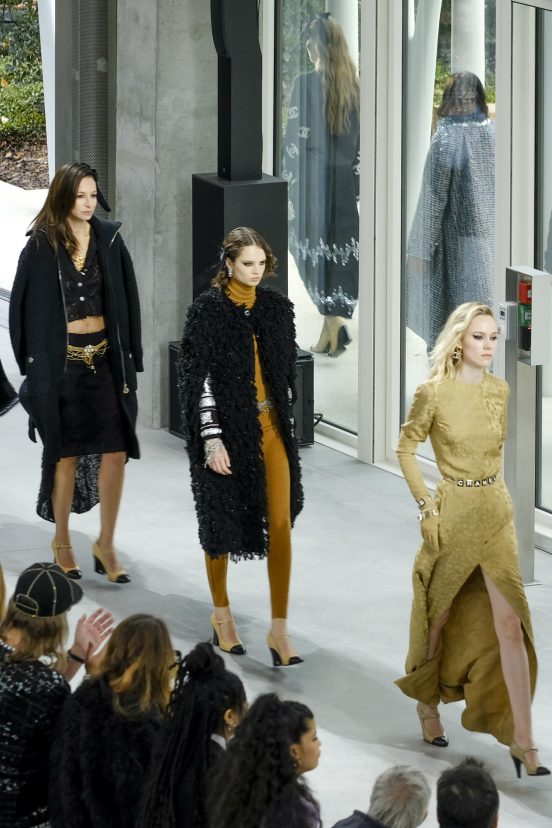 Craft: The Past, The Present and The Future

Craft is at the very core of the Chanel brand. So much so, each year the Maison hosts an off-schedule runway in which it celebrates its artisans who provide Chanel with its iconic aesthetic codes and preserve the expertise associated with French luxury; the Métiers d’Art.

Now in its 19th year, 2021’s Métiers d’Art brought guests right back to the heart – and new home – of Chanel, unveiling the collection within the walls of the newly built Le19M in Aubervilliers, Paris, designed by architect Rudy Ricciotti. “It’s a vast, very open space, with a façade adorned with threads of white concrete, a garden, beautiful walkways, and a large gallery,” explained Creative Director Virginie Viard.

Quite the change of tempo for the showdown, which was a relative blank canvas compared to the lavish sets of its former home at the Grand Palais, previously host to everything from a space shuttle to an alpine village. But perhaps that was just the point?

Ahead of the runway, guests were treated to a behind-the-scenes tour of the Métiers workshops. Here, they discovered the exceptional savoir-faire and thousands of hours of workmanship of embroiderers Lesage and Atelier Montex, the goldsmith Goossens, the milliner Maison Michel, the feather worker Lemarié, the pleater Lognon, and Massaro – the cordwainer behind Chanel’s signature two-toned pumps. As revealed earlier on The Impression, Viard paid homage to each with works from 8 writers and 8 artists, honoring the creative dialogue and history of the Métiers at Chanel with a short film created by the choreographer and dancer Dimitri Chamblas.

It’s “very metropolitan yet sophisticated,” explained Viard of her latest offering. The designer has the hard job of satisfying customers old and new, reinforcing a brand legacy well over 100 years old while modernizing the house’s codes with today’s internet-tinged taste levels. Today she excelled in fusing them with a newfound eclecticism that riffed on the past and present. There was classicism amidst the column knit dresses, the sensible two-piece tweeds and generous day-coats, yet modernity amongst lounge-loving catsuits, midriff-baring crop tops and graffiti-laden embroideries.

It seems, not even Chanel is safe from the youthquake that has a hold on fashion; lashings of stomach met their match with low-slung trousers and yes – baggy jeans!

Belly chains framed the gap between cardigan-boob-tubes and hipster skirts while dripping gold charms – and plenty of them – told a story of the house of Chanel past, present and very much future. Logomania – everywhere, from a smattering of double-C applique, ‘s across cardigans to a full crystalized ‘Chanel’ logo across the pockets of a sweatshirt silhouette.

But look a little closer, and one will see the hours of skill that have gone into recreating those streetwear codes with couture status; that’s something you will only find at Chanel.

There was something a-play with proportions that lifted the collection from ‘try-hard’ to triumph; Chanel’s iconic blazer came updated in new lengths, elongated, double-layered, and even floor-sweeping with a strong shoulder and stand neck. Viard riffed on the clean lines of her new surroundings via graphic tweeds and sparkling silver grid embroideries. Bouncy feathers and sheer skirting felt oh-so-Carrie Bradshaw, paired with duos of handbags in mini proportions. ‘Viard understood the assignment.’

Virginie Viard’s years of experience as the direct liaison between the métiers and Karl Lagerfeld during his tenure at Chanel have armed her with the know-how for the Métiers d’Art extravaganza. Somehow, her S/S22 ready-to-wear collection fell a little flat; but it seems her new surroundings have given her a new lease of life in which to take the brand into the future while all the meanwhile preserving the sacredness of its past.