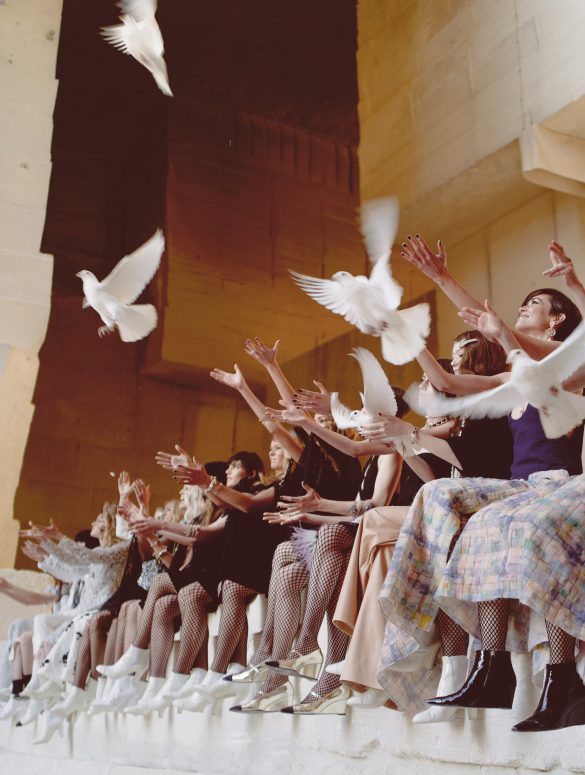 DREAM THE SAME DREAM TOGETHER

In the days before today’s unveiling of the film of the Cruise 2022 show taped in the South of France, Chanel released a series of short films, a small hardbound book, and a poster depicting the model Lola Nicon. Portrayed as a new kind of punk heroine, the model wore a selection of the new collection looks while lounging inside the founder’s apartment on rue Cambon amidst this alluring and this intimate world, one constantly on the crisp of renewal each new fashion season.

Surrounded by the impeccable and exact decorations preserved in a time-stopping manner, Nicon sat on the beige suede sofa in the main salon. Her own face black print short sleeve tee-shirt, a micro tweed skirt, black fishnet stocking, and the classic beige and black goatskin and grosgrain slingbacks denoted the new tempo of this cruise season. In another of Inez and Vinoodh black and white photographs, the model wore a black and white print long dress. She stood in front of a fireplace with two black bronze deer; among the founder’s bestiary, decorative pieces included a golden lion, female sphinxes, and orange painted camel.

Inside the small hardbound book between the pictures of floral still-life depicting images of white iris, lily of the valley, camomille, pink and blue hydrangeas, pink meadowsweet, and tulips are two handwritten personal letters from the French poet-artist-filmmaker Jean Cocteau to Gabrielle Chanel written on June 12, 1926, and January 1, 1955. Addressing Chanel as ‘ma chérie’ and ‘ma chère Coco,’ the letters written with simple words denoted a profound friendship over the decades, a friendship also in the idea of devotion to the arts the freedom of creation both the designer and the artist shared.

Because Gabrielle Chanel was close to Cocteau, and I love the film Le Testament d’Orphée. In particular, this magnificent scene: a man with a black horse’s head descends into the Carrières de lumières, his silhouette cut out against the white walls.

– Virginie Viard, artistic director for fashion collections, on her her thinking that linked the image of the Cocteau’s centaur to the collection of the bestiary in Chanel’s apartment to their enduring friendship.

Chanel did costumes for several of Cocteau’s plays, including Antigone in 1922 and Oedipus Rex in 1927, and he illustrated her clothes as art. Both Cocteau and Chanel created costumes for Sergei Diaghilev’s Ballets Russe.

Mirrors are, for Cocteau, an instrument not for self-reflection but a door to another world as the deaths by motorbike accidents were revived and taken through another dimension. At the haute couture salon on rue Cambon, the founder installed the mirrored staircase to observe the show below from a different vantage point. Fashion becomes the mode of transformation, reflected in these mirrors in art or life.

Jean Cocteau had chosen the Carrières de lumières in Les Baux-de-Provence in the Alpille mountain range north of Marseille as the location that for his final film Le testament d’Orphée released in 1959 as an autobiographical interrogation on the art he had invented in over half a century. In Le testament d’Orphée, Cocteau played himself as artist and Jean Marais the lead role of Orpheus with an all star-artist cast cameos by Claudine Auger, Serge Lifar, Pablo Picasso, Roger Vadim, Charles Aznavour, Brigitte Bardot, María Casares, Jean-Pierre Léaud, Annette Stroyberg, and Cocteau’s real life lover Edouard Dermithe.

At the heart of Cocteau’s trilogy that ended with Le testament d’Orphée is the notion of the exploration of the complex relationship between the artists and their creations. In the movie, Cocteau played an eighteenth-century time-traveling poet recalling his inspirations, obsessions, and artworks. Here Viard time-travel bits and pieces of Chanel personal history into a collection of clothes.

Carrières de Lumières is an old quarry composed of different spaces from the years of excavation of bauxite and limestones to construct the nearby Château des Baux. This exact location provides a perfect backdrop for this youthful cruise collection principally in white and black of relaxed shapes with an inkling of punk. The idea of clashing notions of elegance and the rejection of perceived excesses expressed the central tenet here in the sleeveless tweed jacket and fringe skirt with a black graphic face print tee-shirt. “Because of the simplicity, the precision and the poetry of Cocteau’s film made me want to create a very clean collection, with a very distinct two-tone, made up of bright white and deep black,” Viard said of the stark contrast of the fabrics.

The short black leather skirt with long fringes paired with a short sleeve white tee-shirt and a crochet corset or the fringe trims on the short skirts of the classic tweed suits continued the punk idea of deconstructing some of the traditional Chanel signature tweeds making these classics more amenable to younger women. That means pairing the loose-fitting jackets – in cropped black and white or light pink tweeds – with the above-the-knee skirts with braids trims. It also meant a fitted jacket with fringed trims sleeves and hems like a windowpane white stripe black long jacket with star print skirt.

Echoing the extreme modernity of Cocteau’s film, I wanted something quite rock. Lots of fringes, in leather, beads and sequins, t-shirts bearing the face of the model Lola Nicon like a rock star, worn with tweed suits trimmed with wide braids, and pointed silver Mary-Janes. A look that recalled as much the modernity of the sixties as that of punk.

– Virginie Viard, explaining the contrast in shaping Chanel’s classic for a new era and a new audience

The wide flowers of Provence – daisies, thyme, lavender – photographed as art still life pictures and the hibiscus from a still image of the Cocteau’s film find new life. They are embroideries on black wide-leg pants and black tank top worn by the model Mica Argañaraz in the show, as black embroideries on white pants with a fitted double breast jacket as floral decorated on a black tweed skirt suit with a midriff tank top.

History matters at Chanel. This continuous transmission of authority and authenticity carves a specific aesthetic for the brand.

The core meaning of Chanel, with these new iterations of new signatures clothes wrapped with a bit of art, poetry, and beauty of Provence flowers like lavender Bishop’s flower, pink hydrangea, orange cosmos, or butterfly ranunculus, now express here in great black. White floral and dove print long dress or in the new tweed jacket now paired with mini skirts continue to resonate without the requisite radical seasonal transformation in any way.

The innovation here at Chanel is how to invent new stories with fragments of the past and an eye on what and how young people today espouse fashion.

There is no need for displacing any of the familiar signatures because they are still the center of attention for the brand. These shows are like physical exertions or exercises at the gym that directly tie into experiences. Each fashion show is a standard set of movements and clothes and bags and shoes that fit into a defined storyline, repeatedly repeating bedtime stories told to children. Here in this cruise show, the Chanel signatures are made anew via the idea of making the kind of clothes to appeal to the young generation but made in a Chanel way.

By putting this cruise show in the context of experimental art within the house’s historical heritage, Viard provided the perfect mosaics to create the Chanel experience for audiences across the globe.

The most here is how to translate history and heritage into a living moment to absorb new experiences by the global audiences, especially the younger set eager and curious about the background of the products they intend to purchase.

The idea is to acquaint the new generation with the symbols of Chanel here divulges with the aid of Cocteau’s art film. Through art, objects have become more significant identifiers rather than just mere home decorations. These items, for example, the lion and the camellia flower, are now objects of the Chanel mythology themselves. They are incorporated into the narratives of the brand in the image as in reality – the white camellia paper flower is attached to every black shopping bag. Enlivening the past heritage has to live in this current moment’s eye and focus on the present and tomorrow.

It is also a way of innovating the heritage but incorporating and amplifying the symbolic significance of these iconic items in a new light. It is how the dove prints on black and white flare sleeves, round collar boat neck long dress descended from the Chanel archives achieve the vibrancy on the gamut of cropped corsets and long flouncy skirt or as a simple deep v-neck loose shirt dress. The less rigid shapes of this cruise collection recalled similar silhouettes from the early 1960s and perhaps a double breast black and white suit from 1931, whose large open lapels graces the black and blue sleeveless tweed suit.

There is no need for pandering only the delights of bringing different new ideas into reality in Cocteau’s creations. In this Chanel cruise collection, the pleasures of the clothes lie in the loose and easy spirit with little attention paid to any formal dressing, even the black strapless short dress with a black crochet-knit cape.

Perhaps in going back to Cocteau and the site of the artist’s 1960 film, Viard may infer the idea that fashion like film or like mythological literature is a magical mirror. This portal can transport the audience elsewhere to a world both familiar and strange. It is an allegory of this cruise collection – the idea of destinations here traveling without moving, so to speak at this moment.

Linking with art, culture, and clothes is now key to luxury fashion.

In picking decipherable pieces of its history to highlight a far larger aim of continually supporting the brand’s visual image narratives linking the past with the present, Chanel equates its history with the current aesthetic composition.

Through the Chanel Culture Fund, the house was introduced in mid-March Chanel Next Prize to support ten creators across different visual and performing arts fields. In partnership with international cultural institutions like the National Portrait Gallery in London, the Centre Pompidou in Paris, the GES-2 in Moscow, and The Underground Museum in Los Angeles, the Culture fund will foster programs on creative thinking around the globe. The current project with the NPG focuses on the 2023 exhibition Reframing Narratives: Women in Portraiture while working with the Pompidou centers on creating sustainable communities.

At the start of the year, Chanel also introduced the first in Les Rendez-vous littéraire rue Cambon with the global ambassador Charlotte Casiraghi. The taped podcast of conversations with the French writer Sarah Chiche about the German-Russian author and psychoanalyst Lou Andreas-Salomé at the recently renovated haute couture salon. The talks centered on the theme of the emancipation of women through art and fashion. Casiraghi performed at the post-show entertainment along with Vanessa Paradis and the esteemed French singer-composer Sébastien Tellier.

On a grand scale, Chanel is reconnecting to its heritage of arts and letters with a deep dwell into fomenting new creative processes and discussing the vital role of literature within the historical heritage. In combining clothes with art and history in this cruise show, Chanel is amplifying the real connections with culture in the past and solid investments in the nascent art scene today.

“It is the unique power of the cinema to allow a great many people to dream the same dream together and to present illusion to us as if it were strict reality. It is, in short, an admirable vehicle for poetry,” Cocteau said upon the release of the film in 1960.

Chanel is now a key player in the culture at scale in global society at large, and not just in fashion. Meanwhile, the brand offers plenty of clothes, new bags, dog collar necklaces, and yes, those fabulous white leather boots.