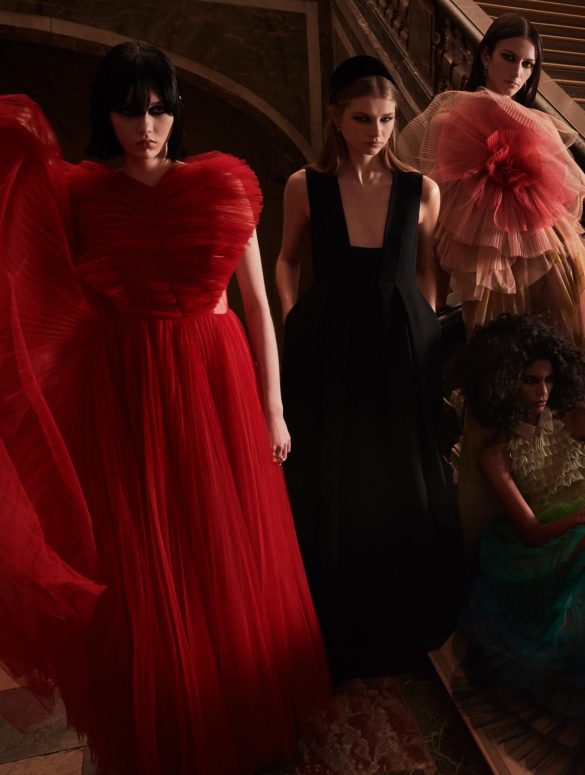 Fairy Tales in a Film, but the Clothes are Real

“The idea was to recreate in the show space of the baroque Galerie des glaces situated inside the Château de Versailles with an installation by the artist Silvia Giambrone who has worked with mirrors. For the choreography, I worked with Sharon Eyel as we have done in the past. She wants to express in motion the relationship that people have with these mirrors but now covered in wax. Mirrors are always present in many facets of fairy tales, and this explores the relationship that people have with mirrors,” Maria Grazia Chiuri explained her thinking of how this film came together via Zoom.

Initially, Chiuri said the planning was for an actual show with a tiny audience, but when that was no longer feasible, the plan shifted into creating this film in place of a live presentation.

Set on the grounds and inside the Galerie des glaces, the film opened with two women sleeping in a different era who significantly awoke from a clock striking the midnight hour to alter and surreal dimensions. Meanwhile, the Eyel group of dancers performed their graceful movements in the misty forest, then approached the castle and entered the grand staircase. The girl in the woods now incarnate inside the court, and she emerged at the end as one of the girls wearing a red tulle heart-shaped long dress running outside to try to discover herself.

The choice of artists that Chiuri deploys in all of her collections is not abstract, nor is it an arbitrary choice. Instead, Chiuri invited these specific artists to work on aspects of the show. The purpose isn’t for decoration but in how to share a common point of view working with artists within another realm and another space with the express reason to incorporate these outside visions as part of the collection’s thrust.

Here, Giambrone’s 2018 Mirrors formed the base of her newly created installation of mirrors titled La galerie des ombres with mirrors three meters high and two meters wide covered in ecru wax with transparent thorns sticking out on the perimeters framing each of the actual mirrors in a contained space surrounding the original mirrors behind.

Eyel has worked on the spring 2019 show where her dancers moved gracefully on the stage and intermingled with the models in a staging that makes those spring clothes came to life. Now, she and her troupe of dancers are pinning themselves in front of these waxed mirrors, in a way obsessed with what they were unable to see as the models wearing the new lean and perhaps sensual fall clothes passed by them. The transparent spikes in Giambrone’s mirrors can present dangers for those too absorbed.

“Sharon Eyel is the protagonist of the film as she can go through the mirrors. She showed the young girls not to look into the mirrors to find their personality as the mirrors covered in wax, so you don’t see your reflections. Fashion is a way to create your character,” Chiuri said.

But a few days before the premiere of Beauté dérangeante, Dior released a series of animations featuring five female illustrator-animation artists who created concise moving images that shared their point of view of the feminist world of animation and cartoon.

The Italian Teresa Cherubi did a series of colorful cartoons of women in many different social situations – home, school, office, undersea – to illustrate women’s divergent roles in society. Simultaneously, the Dutch and Nigerian Aisha Madu worked a short of a flying female riding an ant, taking command of herself. The Japanese Noriko Okahu dwelled on mysticism and enlightenment, while the Argentinian Bárbara Cerro did a transformational animation. And the French artist Marion Fayolle did a mesmerizing short illustrating the power of the women’s breasts as bridges to togetherness.

For all its art surrounding, this fall Dior ready-to-wear collection isn’t in surreal territory.

On the contrary, the clothes are very much ground base. “It’s not like making a film like in couture where we make special clothes for the final clients, here we have to make a film to show all the collection to our audience and our buyers,” Chiuri emphasized the central focus of the film.

“Showing the clothes” started with a simple white cotton and lace blouse paired with a long navy skirt, an opening look of a show of no-nonsense clothes. The shapes fall more into the lean terrain with long leopard print wool coats or grey tweed A-line overcoats. There’s a mixture of a few masculine looks in these white blouson/gray pant, black hood parka/leopard skirt, or even a red wool hooded sleeve coat/red pant; but the more girlish frocks like a leather puff sleeve short dress or a white lace long dress offset these masculine overtones.

The eveningwear is simple with the shapely dress with no real need for further embellishment. The blue pleat chiffon asymmetrical short dress or the multicolor layers of ruffles long dress the standouts for when nightlife returns.

What strikes me when watching the film is the degree to which these fall clothes express a lot more sensuality, not overt sensuality evoked by the clothes that this time feels more instinctual. Sensuality isn’t much of a word that aligns with Chiuri’s work at Dior in the last five years, but it is present here more than in the past.

For example, the grey-brown leopard print single breast coat and a matching scarf covered the entire model’s body, saved for the black sheer organza ruffle skirt revealing a shimmer of legs just above the lace-up black leather boots. Then, there is the navy three buttons jacket with a black pleated chiffon short skirt.

“What we need in life is love, and love can transform into many things. And now we have to maintain so much distance from each other. And I wouldn’t say I like this kind of distance. You can touch each other, you can kiss each other,” Chiuri said when I asked about this touch of sensuality. Perhaps some of these clothes can help with closing the distance in the fall.

Yes, there are plenty of references to the Dior heritage and codes. These heritages are frequently present but now more than ever, and these codes are never any direct interpretations of the past. The rose print parameters on a simple purple-pink short sleeve shirt and matching cigarette pants or an elbow sleeve dress belted at the waist inspired by the textile designer’s original print compositions of apple and roses Andrée Brossin de Méré. Instead of reproducing the original prints from the past, Chiuri employed a camouflage technique to blur the roses’ contours with chromatic effects by the chiné printing techniques that just gave hints of the flower. The Cannage motif itself is hard to distinguish on the quilted coats. Again more suggestions, but no reproductions.

Chiuri’s recent collection gave more hints of the Dior heritage and the house codes than reproducing any of them in overt ways. The designer now relies just as much on her instinct of what women may want from fashion and clothes.

The Bar jacket, now executed in a four buttons grey tweed with loose pleat long skirt, is much less ‘Bar’ than it has ever been present in Chiuri’s collection. Perhaps the skirt’s flowing fluidity with its movements against the legs and the black leather boots as the model walked by one of the dancers feminized the more rigid construction of the jacket. Chiuri designed the skirt with enough volume to counter the immovable jacket.

Her Dior: Maria Grazia Chiuri’s New Voice, the artbook book published by Rizzoli this week, demonstrated how far the Roman designer has traveled since that first white tee shirt announcing her feminist stand. By incorporating the works of these feminist artists globally – Judy Chicago, Tomaso Binga, Penny Slinger, Vicki Noble, Marinella Senatore – and the female photographers like Janette Beckman, Brigitte Niedermair, Chiuri affirmed her transformation of Dior into a women’s brand in the way how women see the brand and its fashion.

The art photo book contains original photographs by women photographers such as Kristin Lee Moolman, Julia Noni, Nan Goldin, Sarah Moon, Cass Bird, and Coco Capitán, among others who chose their subjects series. The book serves more than an anthology of Chiuri five years at Dior – it shows the complete feminization of the Dior heritage silhouette, now a bit softer and, if looked closely, a bit more sensual.

This film and the haute couture films have been effective and creative mediums to show new Dior collections to the global digital audience. It is interesting to see how the brand will respond to the return of in-person fashion shows – whether Dior will embrace a hybrid of conventional fashion shows and added a creative digital film to conjure each new collection.

Looking at this show and the collection, there is an immediate dichotomy between the levels of art involve while the clothes are so much more realistic. But, perhaps that is the ingenuity here, crafting the art around clothes women can wear.