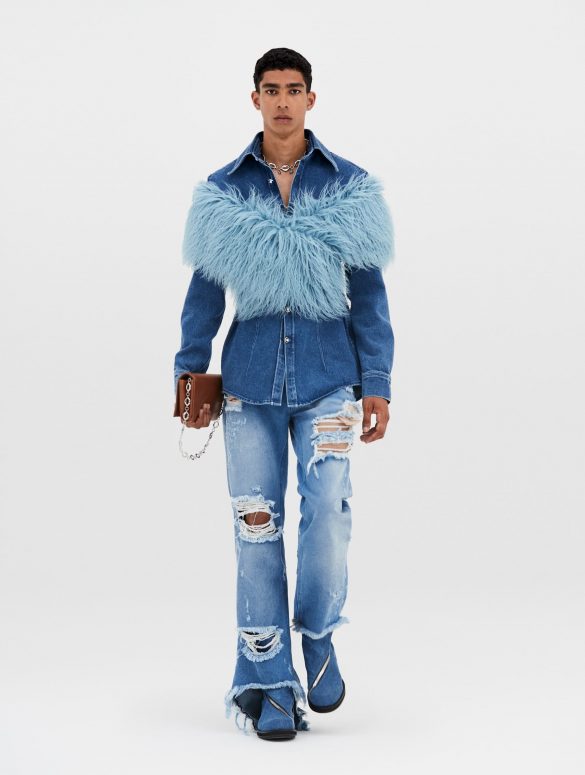 On a frigid late January winter night with freezing rain and high wind on the outskirt of Paris, a concrete depot was accessible by the RER B train station, at least a 25 minutes walk through a deserted area, something close to being an urban wasteland.

A small audience sat on the ramp outside of what was a depot warehouse facing the brown dirt beyond the concrete wall surrounding the ramp with barbed wire. Beyond was a darkened skyline of the banlieue with high-rise apartment towers dotted with yellow light lights. The long RER trains traversed far in the distance, their engine roaring in the early evening winter blackness, providing a sign of life amidst this bleakness.

I remembered the rain got heavier, and the wind got colder as the makeshift lights turned on. For the next ten minutes or less, the audience fixated on examining the clothes on the models who left the small entry to the depot now covered with taped-up plastic curtains draped in the same manner and walked on the small concrete path bordering an edge to the bottom field below.

The models wore a range of clothes, clothes with specific social and cultural signifiers, but clothes now reworked and replenished for another use altogether different – high menswear fashion doused with a strong injection of sexuality.

That meant creating a desire for clothes that straddle the limits of workwear and formal wear by shifting a bit, not the construction by the visual cue of the garment that focuses the eyes on, say, a specific area of the male body. For example, a pair of dark green cotton denim jeans had oversized steel metal zippers frontal on the crotch prominently display with no cover fabrics like a regular pair of jeans. One model had on similar jeans in white topped with a metal chain tank top.

A hint of the strong sense of tailoring came from two single breast suits, both four buttons, broad shoulder, large lapel, and cut so that the jacket had a boxy fit. The sleeves of the jacket sprouted out from the armholes and the shoulder blades. A kind of inflated shiny satin skinny pantsuit on a bald model, perhaps due to the muscularity of his body and upper body, looked elegant in this raw natural environment.

We were watching the models at GmbH’s second men’s show in Paris for the Fall 2018 season, appropriately titled ‘My Beauty Offends You.’

But this Fall 2018 show from what seemed a century ago provided the fashion seeds that the Berlin-based team of the Pakistani-Norwegian Benjamin-Alexander Huseby and the Turkish-German Serhat Işik. Creative interpretations of uniforms, protective clothes, and a command of always tailoring with innuendo of rampant sexuality imbued in how the clothes look and feel.

Huseby and Işik have established a powerful voice forming a solid community of outcasts, immigrants, and non-binary people. The models in their shows are nearly all non-whites, some not even professionals, but they are the faces of the new generation coming of age across the globe. The pair counts Honey Dijon and the activist Fatima al Qadiri as close friends in Berlin. Their seasonal video drops during the pandemic lockdown raised the volume on the inequality that was becoming more transparent across the globe.

In the U.S., there was a sudden realization during the strict lockdown of the term essential worker – the blue-collar and below workers who had to go to work regardless to keep services flowing no matter what conditions.

In June 2017, GmbH showed its first collection in Paris. They started the brand together a year earlier. At times veering more male, the signature of their un-gender collection are the double metal flies pants, tailored coats, and jackets with topstitched seams adopting elements of fetish wear even on beautifully cut blouson coats. The GmbH garment construction has that rigid Brutalist built even in a patch pocket work utilitarian shirt.

The year of the lockdown saw Huseby and Işik’s sense of duty and activism at a mature level. The pair released art videos as live shows became impossible, using this platform to push their fashion label to social and political activism. Their Spring 2021 video featured Honey Dijon and dancer MJ Harper as the faces of daily resistance. It was an ideal cap off to their socially responsible fashion brand from two people personally experiencing.

In their fashion, Huseby and Işik’s resisted the total drift towards the streetwear-and-sneakers aesthetics now in complete conquest of the fashion world, well more or less. That led to the stellar men’s fall 2021 collection that pushed haute couture into the center of their fashion enterprise. The precision of the couture cutting off the shoulder wrapping shaped coats and jackets had the added subversion of tan faux furs trimming that culminated in a boat v-neck shoulder black single breast jacket pantsuit. More importantly for GmbH is the precision of the founding designers. They don’t ever seem to hesitate in their work.

The new spring 2022 collection titled ‘White Noise’ – one of their definition included ‘when white people won’t stop talking about being discriminated against for being white, so they just fade into the background, and you don’t notice it.’ The collection continues the sartorial departure from last fall in light fabrics with a strong knitwear offering in pale pink and blood-red sweater donning a sickle and hammer symbol. The workwear shirt in tan has western shoulder motifs, paired with tan vegan leather double flies pants or tied around the waist.

The season’s them of ‘White Noise’ too is a social-political statement, quoting the author Don DeLillo’s 1985 ‘White Noise’ book – “The system was invisible, which made it all the more impressive, all the more disquieting to deal with.”

More succinctly, the designers are focused on the idea of a group identity fostered in the novel, contending that everything in society is veiled in symbolism.

Now for spring 2022, they took those symbols of white privileges – the preppy look, the horse riders, the ball gown – and set that world upside down, turning these revere dress codes into more flamboyant gender-fluid clothes for the BIPOC generation. The teaser to the reveal of the spring film showed a group of young white males in a prep school at lunch in white shirts, striped jackets, and ties. This time it is the irony of the symbols of whiteness and the tropes of female whiteness, in the mock-up of a horse rider outfit but perhaps an imitation version joking at the real.

New this spring is the brown vegan leather collar zippered four patch pocket new ‘safari’ jacket worn with a pink snap shirt and skinny white shorts and the short padded coat in light violet. Last season’s giant furry jacket-dress is now in all white or all pink, faux fur, of course. These Demi-Couture GmbH garments can be special order directly from the brand as announced in late April.

The denim portion of the collection is outstanding. The torn jeans have a square cut-out frayed bottom in washed blue and white, showing off the metal zippers across the tan vegan leather boots. A cross-body wrap jacket in denim is a standout garment, and its elegance far outshines its basic fabric. Another is the denim corset-jacket complete with an extended back train of a ball gown and white faux fur in the front and the denim oversize trench coat with a cross over male tank-bra top and torn jeans.

Showing support for the Palestinian movement, the designers made a ‘Free Palestine’ pointed tank top. During the latest bombardment of the Gaza Strip this May, Işik has been active on social media raising attention to Palestinian causes often ignored, especially in the fashion industry.

GmbH is nominated for the 2021 Andam Award ‘Grand Prize’ finalist. Next season, they will take the creative lead of Trussardi, a Milanese leather brand awaiting rebirth in fashion. “With GmbH, we have helped bring topics of inclusivity and responsibility to the forefront of the fashion discourse. Our vision for the revival of the house of Trussardi will be founded in these exact values,” said Huseby on his Instagram announcing the Trussardi post.