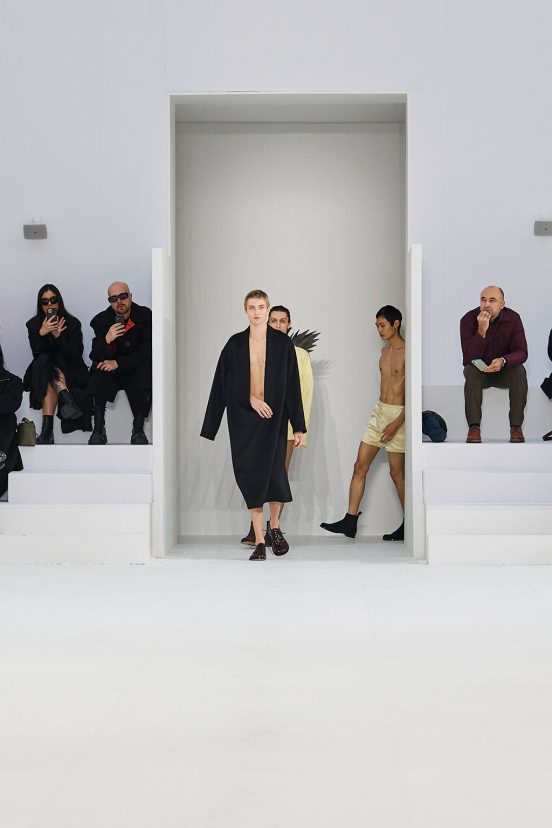 Jonathan Anderson’s recent work for Loewe men’s (as well as at his own eponymous label) seems to have been moving into a realm of pared-back, uncluttered focus – though not without his signature surrealist sensibility – and today’s show felt like the final stage of that trajectory.

Airy, sensual, and understated, the Fall 2023 collection was an exercise in using just a few well-considered pieces to make a big statement.

Aside from shoes, many of the looks feature just a single garment: a long coat, a silk crewneck, a sort of hybrid coat/dress/robe. When layering does appear, it’s quite minimal. Exposed skin is a constant presence; as if to tease apart the logic of dressing, and especially men’s dressing, as what is between the world and the body, nothing comes between the most external piece of clothing and the body.

A closer analysis reveals that almost all of the pieces here can be put into one of two categories: formal-ish outerwear, and loungewear. Anderson seems to be interested in breaking down the barriers of domestic and the public, recasting what feels personal and private as something for all to see. There are far more instances of long underwear and boxers here than what we might consider “actual pants,” but paired with a modernist, swooping-shouldered coat or a teddy-bear jacket and sent down a Paris runway, they take on another aspect.

The works by artist Julien Nguyen which featured as the highlight of the show’s set shed further light on Anderson’s thinking behind these stripped-back, unfinished outfits. With an angular, impressionistic style, they depict a young man in a moment of private reflection, wearing just undergarments – boxer shorts and socks – but also a necktie, a somewhat contradictory element of social formality. Together, the two artists question the distinctions between intimacy and performance and invite us to consider who we let into our private spheres, and why.

Though its quite conceptual, there’s definitely still some sellable pieces, which is sure to keep the Loewe bosses happy. It does feel like the end of the line for Jonathan Anderson’s stripping-back approach, and unless he wants to send models down the runway completely naked we expect to see a change of direction and a new idea come in next season.

We’re looking forward to seeing him get dressed back up, but until then, we’re happy to do a good bit of lounging.