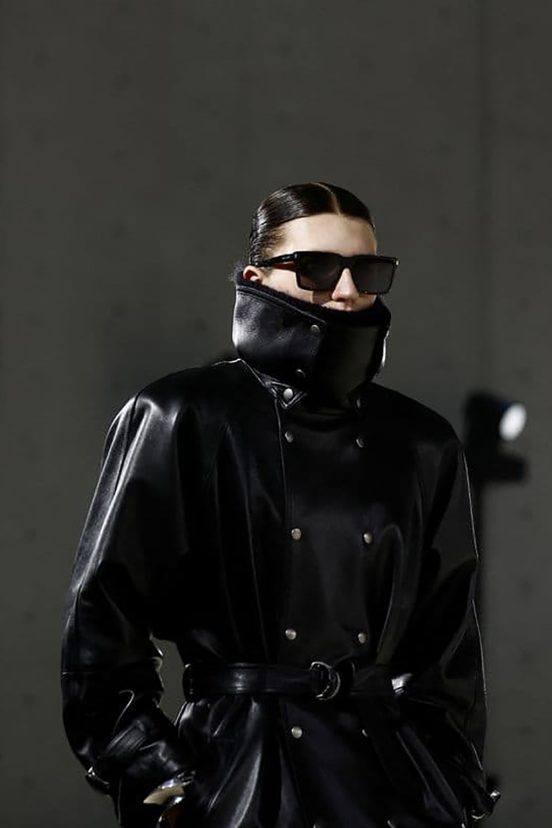 Presented from a privately owned Parisian art museum, Saint Laurent’s Fall 2023 men’s collection by creative director Anthony Vaccarello was nothing short of art – with all its confounding beauty and tenuous relationship with reality.

The Bourse de Commerce – Pinault Collection is one of the spectacular homes of businessman and art collector (and Kering founder) François Pinault’s expansive private art collection that make the works open to the public. A unique intersection of historic and contemporary, the historic building associates the first free-standing column in Paris, erected in the 15th century for Catherine de’ Medicis’ palace, with the vestiges of a granary impressive for its circular 18th-century design, which was capped in 1812 with a spectacular metal and glass dome. The building was then modified in 1889 to become the Paris Stock Exchange. In 2017, it was restored and modified by architect Tadao Ando to become the home for the collection.

Ando’s sleek concrete felt like a fitting backdrop for Vaccarello’s pared back and impeccably precise collection.

Picking up from previous seasons, the designer’s rakishly long and lean silhouettes make an expected return. But a new sense of sculptural precision runs throughout; nothing is extraneous, and everything is considered with a razor-sharp sense of carefulness and intentionality. Shoulders are strong; waists are narrow – like elevated sculptures meant to be seen from below that convey an ideal of the body rather than its reality; this is a distilled, ethereal idea of menswear.

But despite the strong sense of structure, a graceful fluidity moves throughout the collection, present both in the use of materials like satin and cashmere and the languid way in which they are deployed, exaggerated, made to flow. Scarves become capes; leather jackets fall in toga-like folds; pants obscure and envelope.

Ever influenced by Yves’ iconic Le Smoking tuxedo, menswear archetypes have long played a foundational role in Vaccarello’s womenswear collection. But here it feels like we are finally seeing the dialogue inform the men’s collection more deeply and meaningfully – not only in the literal references like the headscarves that return from the last women’s collection or the sweaters that extend to become smock-like dresses, but also in the sense of fluidness, in the attention paid to the hips, and in the treating of the body as something wrapped up and abstracted.

Like sculpture, these looks feel alive but lifeless. With its abstract, distant beauty, the collection points to wider questions about the purpose and identity of menswear. Still a much smaller fraction of sales than women’s ready-to-wear and accessories, menswear is often thought of from a strategy perspective as a way to increase high-altitude brand image without giving as much of a return on investment.

With this homecoming show, Vaccarello, who hasn’t held a standalone men’s show in Paris since 2015, instead opting for destination shows, like last season’s from Marrakech, or presenting men’s alongside women’s in a co-ed format, seemed poised to make a statement that menswear is ready for the next level. Has he succeeded? It depends on the way you look at it. From a creative, artistic standpoint, the collection is incredible, probably one of his very best across both men’s and women’s. But especially after a week in Milan where big houses were banking on accessible, easily layerable menswear staples, and with a collection that’s devoid of bags, much of it (apart from the coats – though that may be more than enough) doesn’t feel too wearable in real life.

But we should count ourselves lucky that we get to witness a designer freed from restrictions and margins, who can transform the design traditions of the past into a pure statement of beauty.

If it feels like this clothing doesn’t belong to this world, that’s because, in part, it doesn’t. Leveraging the language of fashion design, Vaccarello transcends its contingency and works according to principles of sensuousness, harmony, and internal integrity. It’s no wonder he held the show in an art museum.