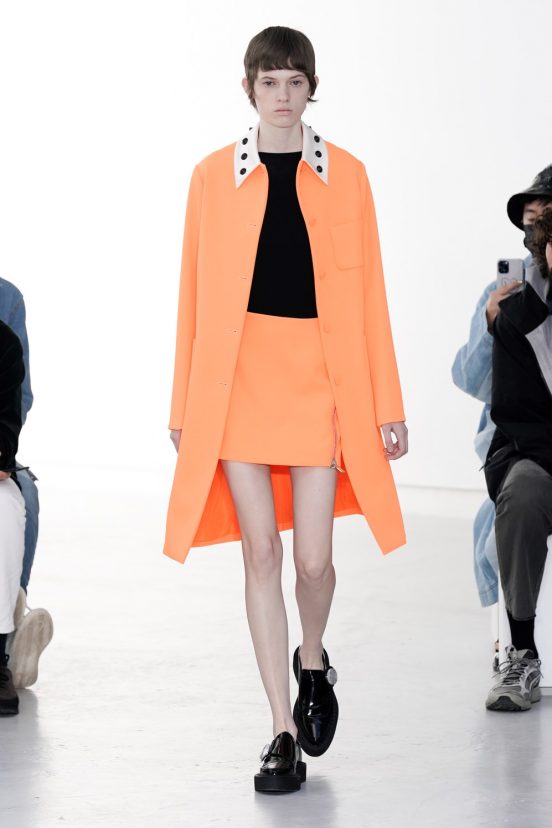 Yang Li is a familiar name for those who are used to the Paris calendar and his directional shows, which he delivered under his eponymous brand for several seasons, often featured live performances, as well as unexpected collaborations with artists and musicians. It was therefore a surprise when Li was officially announced as the new creative director taking over Shang Xia, the Chinese luxury brand, which was originally launched in 2009. Would Li bring his own edgy taste and conceptual streak to the brand? Or would he embrace more familiar and safer territory? Talking to a small group of journalists after the show backstage, Li emphasized his Chinese heritage and ambitions for the brand: “I wanted to offer a fusion between modernity and tradition, the physical and the digital. We took the traditional pillars of luxury and tried to subvert them, combining craft with innovation. This is very Chinese and important for us. What I want to underline here is that China is not just a market, but a creative force as well. Purity is key for me, and I wanted the clothes to look as streamlined and simple as the accessories.”

“Results were mixed overall, and if Li succeeded in tackling the more traditional elements of luxury, such as crisp tailoring, deluxe outerwear or elegantly draped dresses, this first collection didn’t feel as creative or forward-thinking as it should have.”

The designer seemed to have two iconic figures in mind that ruled the 1990s in terms of minimalism: Helmut Lang and Jil Sander. A single-breasted orange suit, worn by Argentine model Mica Arganaraz, strongly recalled Lang’s androgynous tailoring for women, while padded coats and sleek sportswear shapes evoked the fuss-free and functional approach of German designer Jil Sander. Was the fluorescent color palette, with its bold hues of yellow, pink and orange also a nod to Raf Simons’ tenure at the same brand, which he left in 2012?

Yang Li is a talented designer, and even though many of the looks and accessories he showed today were beautifully executed, his vision of minimalism lacked warmth and a sense of singularity. It would be more enticing to see Li use his own underground flair and translate it into a luxury context, which would then qualify as real subversion. Still, there’s plenty of time for him to find his footing at Shang Xia and develop a stronger voice.