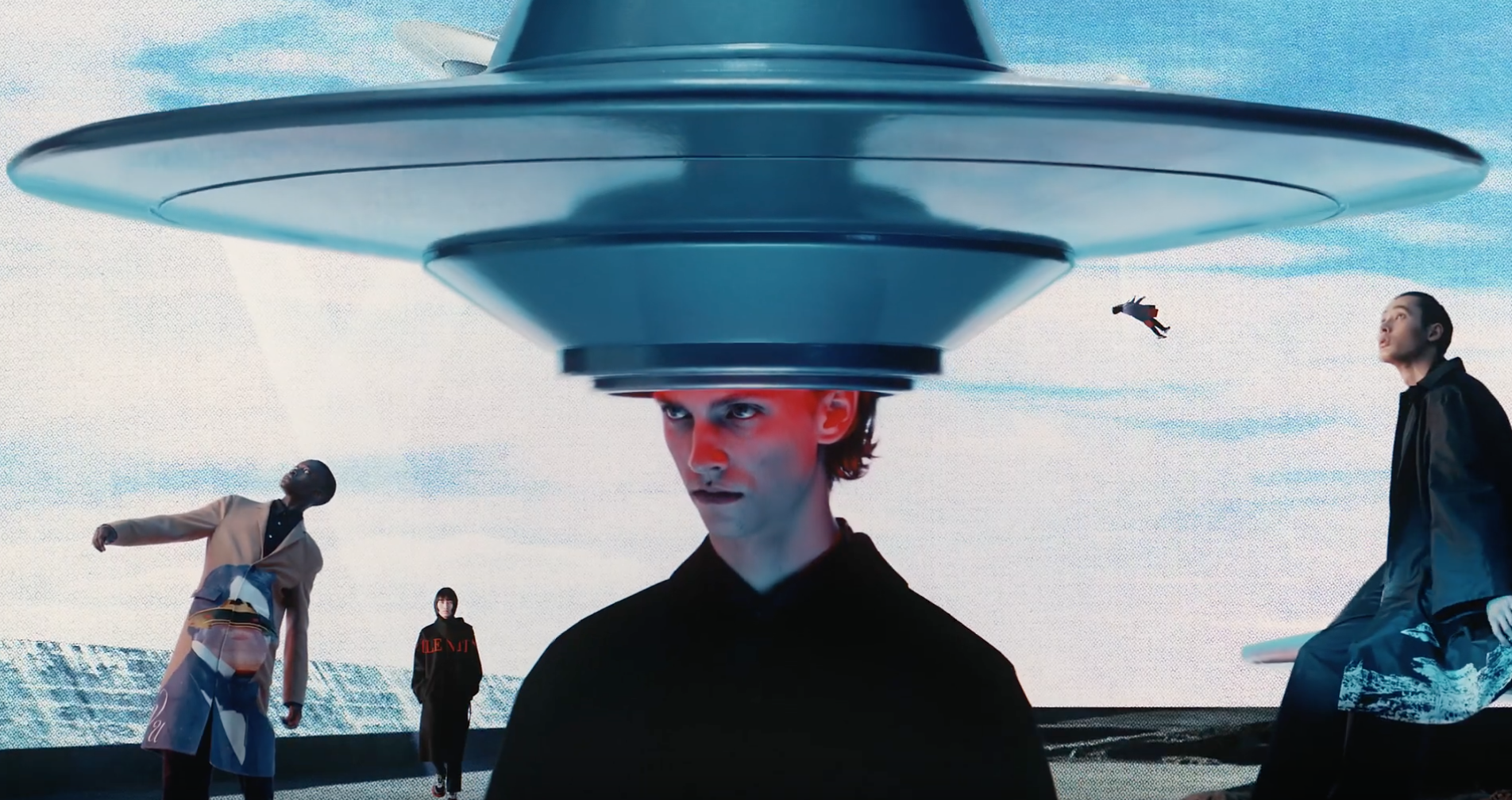 Once a rarity embraced mainly by mass retailers to elevate their affordable offerings, fashion collaborations have spread across every tier today including luxury. Some, like Valentino x Undercover or Gucci x Comme des Garçons have elevated the game and shown how brands can work peer to peer. When done right the teaming can lead to strong branding as communication teams from different houses and categories combine visions to spark a flame that burns bright for both partners.

Stylist and longtime A.P.C. collaborator Suzanne Koller broke new ground this season as a stylist, opposed to celebrity, collaborator teaming with A.P.C on their second ‘Interaction’ project, with Kid Cudi as the inaugural collaborator.

Suzanne Koller’s reputation as a well-known fashion director of M Le Monde and co-founder of Self Service magazine, helped to pave the way toward a fruitful partnership of 10 pieces named ‘Obvious Classic.’

The campaign was lensed by one of The Impression’s 50 Up & Coming Female Creatives Bibi Cornejo Borthwick and features model Maggie Maurer. The partnership represents just how simple and strong a straightforward pairing can be and that collaborations don’t have to be outside of the fashion circle to entice the customer.

Just ahead of signing with Compagnie Financière Richemont, designer Alber Elbaz teamed with footwear house Tod’s on a ‘Happy Moments by Alber Elbaz’ collection. The partnership was the second installment of the Italian brand’s Factory Project, named after Andy Warhol’s New York Studio from the 1960s.

Tod’s Happy Moments by Alber Elbaz is significant for both Tod’s and Elbaz. Just as Tod’s has been making an intentional effort to reinvent, Elbaz has also been intentional about his return to fashion. Elbaz had designed bags and accessories for LeSportsac, had perfected fragrances with Editions de Parfums, and had served mentorships at renowned universities.

The teaming was more or less a typical fashion pairing, what was smart about the narrative was how Tod’s embedded it with Elbaz’s personality. Sketches and videos of happy moments were at the forefront of the campaign. The sketches are Elbaz’s, concepting not only the campaign, but of what the campaign represents—a life of happiness and celebration. Weddings, birthdays, dancing, music, cake, balloons—all things celebration, with Alber Elbaz as the instigator of joy.

“A completely white canvas was offered to me by Guido Barilla in our first meeting,” says GCDS’ Creative Director Giuliano Calza. “What started as a capsule collection, eventually ended up in Hollywood studios, with our teams filming for three days on Los Angeles sets transformed to dinner settings.”

The collaboration was totally unexpected and showcased how when fashion designers are left to their own creative devices, juices flow and can deliver a meal that is worth salivating over.

In a combination of luxury fashion and classic designs, French fashion house Givenchy partnered with Japanese shoe company Onitsuka Tiger. The drop came in the form of a short film, accompanied by several images, directed and photographed by Sam Rock.

The collaboration marked the first time Givenchy partnered with a sneaker brand which was also a first for Onitsuka Tiger, who has never worked with a luxury institution. The teaming blended two premium offerings in their perspective fields and showcased how elevation cane team well with elevation to climb even higher.

Just as the professional tennis world wrapped up Wimbledon and headed to the final grand slam of the U.S. Open, Lacoste sought to make a grand slam of their own by teaming with Tyler, The Creator’s label Golf Le Fleur.

Lacoste x Golf le Fleur enlisted director Luis Perez and producer Tara Razavi to create a campaign that poked fun of player meltdowns and alludes to the unfiltered tennis icon John McEnroe. The candidness of the campaign is reminiscent of Loiter Squad, a sketch comedy series starring Tyler, The Creator, that aired for three seasons on Adult Swim and Lacoste x Golf le Fleur is a doubles match we never knew we needed.

Chitose Abe describes intuition as a guiding force. Things have to make sense for the Sacai founder, even when creating something never-before-seen. Her latest project with Nike follows accordingly. The 11-piece collection combines the past and present of Nike’s running apparel innovations through a tour de force of strikingly-contrasted logos, patterns, colors and hemlines.

The output channels Abe’s signature design language, which brings a new irreverence to running style and extends a partnership with Nike that began in 2014. “Sacai was just at the beginning of its foray into the international realm,” says Fraser Cooke, Special Projects Senior Director. “We saw immediately that Abe is very good at mixing up sportswear with high fashion. One of the things that we thought was really interesting about working with Sacai was her way of layering and draping.”

Belief in Abe’s work with sportswear and military icons has rung true.

Often, I take the things I like from two different items of clothing and splice them together to create a whole that is bigger than the sum of its parts. I express the end result as a ‘hybrid.’

Her capacity to deconstruct and reconstruct ideas — a hallmark of Sacai — gives an unmistakable character to the current collaborative effort. The process also allows for a twofold hybridization. The first is a melding of ideas, the second in true balance of activity.

“There has to be a genuine interest or connection in order for me to create something new and unexpected,” says Abe. “Another important thing is that the partnership needs to contribute exactly half the work. We literally got two photocopied pictures of two different shoes that they folded in half and put on top of each other,” says Cooke of the beginning stages of the Nike x Sacai LDWaffle.”

To showcase the collection which dropped in September the house paired Naomi Osaka, the current world tennis No. 1 player, with 11-year-old skate sensation Sky Brown for the new campaign. Bridging dance, an urban performance space, distinct talents, and the collection are fitting for the designer who is all about mixing things up. The result is one of Nikes most artisanal messages and one that balances the world of fashion with the world of running apparel.

Last year Yellow Submarine, George Dunning’s animated classic inspired by and featuring the music of The Beatles, celebrated its 50th anniversary. Revisiting it for the first time since her childhood, Stella McCartney didn’t have to go far to pull together one of the most unique designer collaborations of the season. Turning to her father’s archive, McCartney discovered a wealth of inspiration and a joyously urgent message of peace that is as important today as it was in 1968.

“It’s shockingly modern, what those 4 young guys did. The beauty of the lyrics blows me away. I found that I was removing myself from the fact that it was family, and just finding myself as a fashion designer watching a piece of material that was massively and emotionally effective to me. We pulled apart the music, the lyrics, the psychedelia, and the comedy and turned them into something new,” explained McCartney.

The collection, aptly entitled “All Together Now,” comprised of a broad array of pieces (for men, women, and children) inspired by the music and imagery of The Beatles and their message of peace and love. Featuring key pieces from the collection which draw directly from scenes and motifs in Yellow Submarine, the campaign stars up-and-coming musical talents Oscar Jerome, KEYAH/BLU, Joy Crookes, and Femi Koleoso. The campaign and its accompanying video was playful and colorful, featuring the artists exploring a psychedelic fantasy world inspired by the film.

The imagery and intent of Yellow Submarine started to resonate with artists at the forefront of the music of today: Billie Eilish debuted the collection with a custom set at her Glastonbury Festival performance. Awkwafina and Ellie Goulding both recently stepped out in the collection’s Leonora dress, and Post Malone and Diplo have been spotted sporting the collection’s vibrant fur-free fur coat.

The truth is out there, and Creative Director Pierpaolo Piccioli of Valentino found it with his cross-cultural partnership with Jun Takahashi’s streetwear brand Undercover.

The unique designer-to-designer pairing received the benefit of art direction from Tokyo-based director and artist Tetsuya Nagato, the campaign explores the collection’s dreamy sci-fi imagery, reinterpreting past visions of the future and putting them in conversation with modern styling and talent. Valentino-clad human beings turn their gaze to the sky as 1950’s-esque flying saucers descend towards the earth, while otherworldly synthesizers sizzle and pulsate to form an extraterrestrial soundscape.

The decision to frame the collection in a world of retro-futurist art feels important. Nagato’s use of painting and collage, rather than something like, say, scientific photography, situates the campaign in a world of the imagination, an alien fantasy of abduction and exploration. Its scope is not merely limited to the earthly and human; it reaches across the cosmos, encompassing both what is and what could be. But the fantasy is still humanly seductive: there is a certain allure as we see a man’s head slowly disappear as he rises upward into an alien spacecraft, a sense of empathetic longing as he takes his eyes off us and fixes them on the night sky.

Whatever lies beyond our solar system, Valentino and Undercover have shown us pairing two elevated designer collections can inspire fellow design houses to also look up at the stars.

One of fashion’s most unique partnerships this fall was the eagerly awaited collaboration between Virgil Abloh and IKEA that launched on November 1st. Entitled “MARKERAD”, the collection encompasses everything from toolkits to wall hangings to bed linens and chairs. Abloh has released an official commercial featuring key pieces from the collection including Mona Lisa and Ikea-receipt wall hangings, a “WET GRASS” rug, a “SCULPTURE” bag and a “TEMPORARY” clock.

The partnership was unexpected, crossing the divide between the world’s most widely accessible furniture retailer and the lead designer of both Off-White and Louis Vuitton Men’s. The teaming widened Abloh’s notoriety while positioning the US designer as fashion’s leading ambassador on the global stage for the moment.