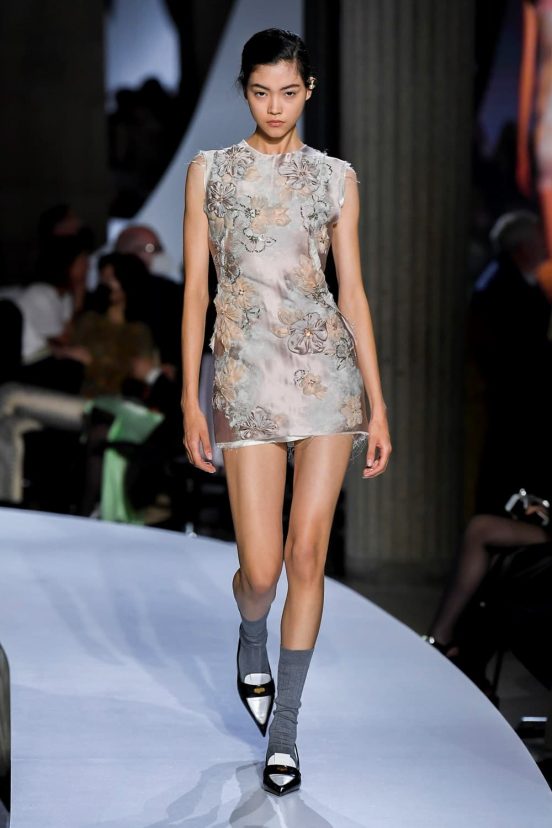 The title of the Miu Miu SS22 show, Basic Instincts, does not refer to the film, although there were moments where it did make you think of Sharon Stone’s iconic scene in the 1992 movie. The runway was about a foot above the audience, and at that angle, the micro bandeau skirts and tops flashing by left little to the imagination – or rather ignited the imagination, depending on how you look at it. In fact, it referred to preppy wardrobe basics like shirts, pants, sweaters, blazers, and sheath dresses that were presented in new proportions to alter their relationship to the body. It’s like the Catholic grade school girls tying their uniform blouses and hiking up their skirts when they’re off school grounds, but luxury.

The pandemic caused everyone to really go inside – not just physically, but metaphorically – and this was Miuccia’s reaction to and reflection of reality, her exploration of what people need and want from their clothes. And now, with Raf Simons lightening her load with Prada, Miuccia really gets to have fun and play with Miu Miu, the younger, edgier, naughtier sister. I hesitate to say sister – let’s agree on sibling – because the gender fluid looks and silhouettes were worn by models where you can’t tell what their chromosomes are, but that’s exactly the point: It doesn’t matter, and they are beautiful.

It’s such a welcome and exciting modernization for the brand. Another completely new approach for Miuccia was the deconstruction and raw edges. Here, there were pockets peaking out from blazers or pants cut and transformed into tops or skirts, exposing their construction.

Night-time dressing saw gorgeous embroideries, not only on classic dresses, but also slightly subverted in oversized sweaters or combined with raw edges.

The “reality” of the show was interjected with fantasy through video work by multimedia artist Meriem Bennani to blur the lines between virtual and real. There’s a sequence of her mother and friends joking about how people are sucking the fat out of their waistline and injecting it into their butts – but it’s not Halal. We’ve all experienced some hybrid form of socializing, working and interacting throughout the last year, doing most things via video conferencing and Zoom. The audience were seated on Eames office chairs, another blurring of the lines between home and work and a nod to work from home. The collection played with the codes and offered a vision of how we would dress for school or work if there were no dress code.

The power of the screen was clearly demonstrated irl. After all this time of bemoaning the lack of physical fashion shows and celebrating the return to the runway, now that we finally get to be here in person and see the clothes up close, there were nevertheless editors in the front row whose eyes were glued to the live stream instead of looking at the real, live models walking by in front of them. Perhaps it was driven by a sense of voyeurism, since the screens were shaped as though you were viewing it through binoculars. At any rate, it was certainly an interesting human character study.