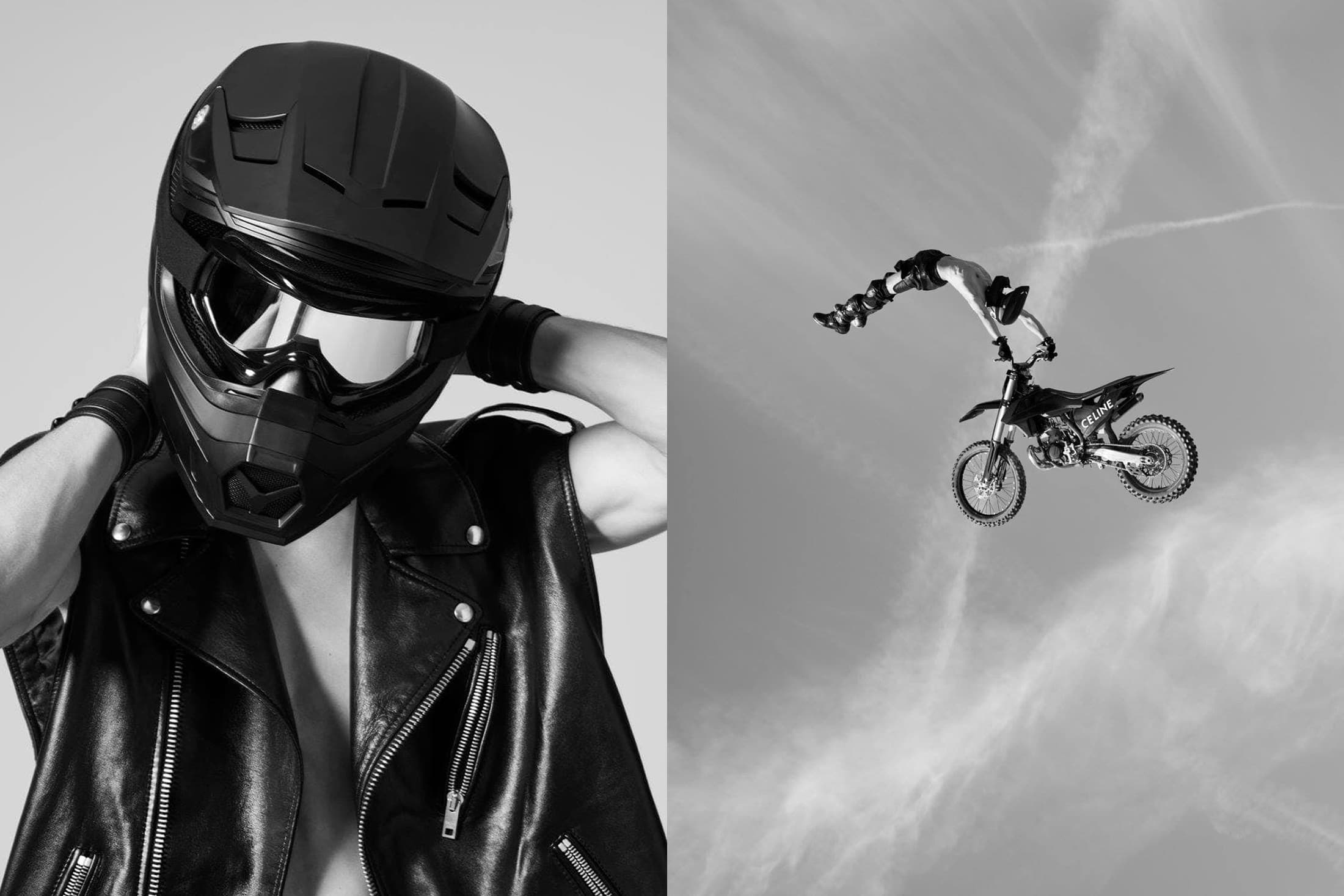 Celine cruises a cosmos of old-school cool in its new Men’s campaign for Spring 2022.

The campaign imagery repurposes that of the brand’s “Cosmic Cruiser” Spring 2022 runway show. But the show had such a strong aesthetic and visual concept that it lends itself excellently to a campaign; indeed, not to use it further might have been a misstep.

Mostly captured in black-and-white, the campaign imagery features atmospheric shots of the immaculately constructed set, motocross stunt action shots, and backstage or runway images that highlight the collection, making for a distinctly Celine mood that is at once rowdy, sophisticated, and low-key.

Just as with his explorations of punk and grunge, however, there is an inherent paradox in a luxury designer using the aesthetic codes of dirt-bike culture: these subcultures developed out of poor and working-class, and often black, communities. This is of course nothing new in the fashion industry; designers have been plundering subcultures for decades, and indeed most subcultures that rise to the mainstream have developed out of a place of economic and cultural instability. But contemporary designers such as Virgil Abloh or Marine Serre, for example, each in their own distinct way, synthesize niche cultural aesthetics with reclaimed elitist codes, creating powerfully progressive fashions that embody diversity and inclusion – pieces that look great while actually saying something.

Meanwhile, Slimane cuts and pastes aesthetic ideas from past subcultures (granted, he does it very well), drains them of any social consciousness or genuine rebelliousness, and markets them to wealthy white e-boys. His celebration of youth culture feels like a celebration of despondency and inaction. His idea of youth culture is wearing clothes that say “I don’t give a fuck about anything, except for the way I look (and maybe some cool dirt bike tricks).”

And he may be right: kids these days seem to find it hard to care about anything or feel like it’s worth it to try to make a difference – perhaps because of the example their elders set for them, and the fact that they inherited a broken earth. Maybe criticizing Slimane for trying to give the (rich) kids what they want is hating the player, not the game.

But caring actually is cool. Isn’t it an artist’s role – and especially one working in fashion, which is both a presentation of a fantasy yet deeply tied to cultural realities – to show us how beautiful things could be? Is it not cynical to regurgitate old ideas for the sake of looking cool without recognizing that those old ideas are cool precisely because they were once new, because they once stood for something?