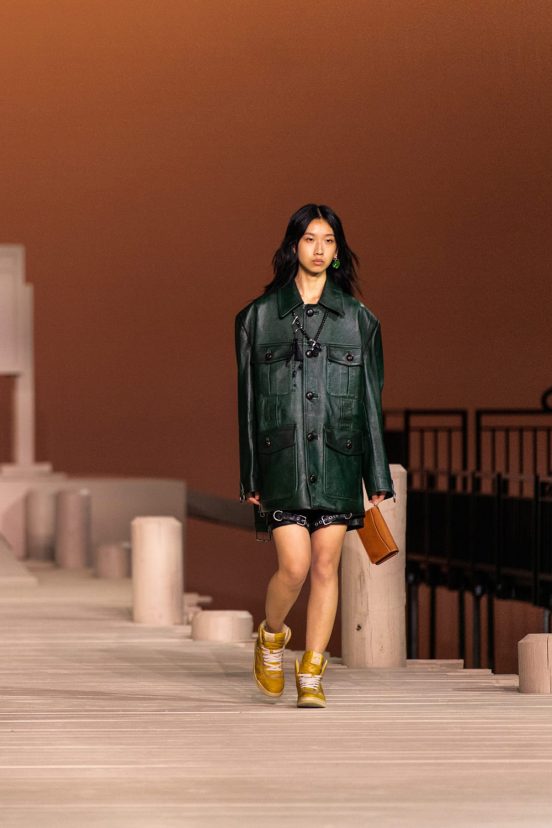 Stuart Vevers’ Muses For A New Coach: Models and Montero

One of Stuart Vevers’s gifts is that he takes Coach to places where the brand has never been before.

In moving the heritage brand forward, he doesn’t leave anyone behind. There are plenty of stylishly classic, wardrobe-builder clothes and accessories to keep the traditionalist happy.

Yet for those craving modernity and desiring brands that embody the engine drivers of today’s culture, there’s plenty for them at Coach.

Lil Nas X aka Montero, closed the show wearing a distressed black recycled leather vest, buckled shorts and carrying a gold clutch. On his feet he wore purple jelly bean sandals and his mouth diamond grills on all his top and bottom front teeth. It was a look that  just about summed up the whole impactful collection.

I find it really inspiring to be dressing these people. It’s changing my approach to design.

Set on a boardwalk, it evoked summers on Coney Island or, as Vevers explained after the show,  how you might end up on a boardwalk after a night of partying.

Vevers is known for his deep dives into Americana and this time the boardwalk and the Western were referenced. There were multiple vests done in various fabrics alongside cozy festooned sweaters worn as tunics with bare legs and scuffed high tops. Babydoll dresses got the Marjane or  jelly bean sandals treatment.

These days, most thoughtful designers are trying to figure out this knotty sustainability issue, and Vevers is no exception. He made ample use of repurposed leather, he said. Coach also has a circular handbag program called Reloved where customers can bring in their used Coach bags and the company will repurpose or customize them.

He has a big, new inspiration for his designs. Choosing Montero to close the show was a manifestation of this. “Montero doing the show, that was epic,” he said. “I think he’s amazing. He pushes himself and he breaks boundaries.”

He designed the costumes for the 23-year-old performer’s new tour. Though Montero said he had other reasons for hitting the runway.

“I think it’s always exciting to go into a new venture in your life and your career, “ he said backstage after the show. “And it will help me with my on-stage performing, presentation and such.”

One of the most consequential and talented performers of his generation, Montero, has been on the sharp edge of gender fluidity and acceptance of homosexuality.

Ververs collection was compelling and futuristic in its gender scrambling. Some of the boys looked like girls and vice versa and it was unclear what was women’s wear and what wasn’t.

“I’m looking to the next generation,” he said. In the last few seasons he’s experienced a shift in his design orientation. “Our casting is very specific, very much about characters and people with a sense of style,” he said. He and his team have turned to street casting. “It’s been a big departure for us in the past three seasons,” said Vevers.

“I find it really inspiring to be dressing these people. It’s changing my approach to design. Sometimes we’re speaking to the models and finding out what they are into, what they’re comfortable with” he added.

In a bit of clever marketing – perhaps masquerading as generosity – models who had walked in the show,  fanned out across New York streets in distressed Coach logo T-shirts. One model was spotted with a beautiful cream structured Coach bag slung over her shoulder. She wore black short shorts and chunky ankle boots. Another, chatting  with friends a block up from the Park Avenue venue, wore his T-shirt tucked into a black ankle-length skirt. It’s the sort of promotion that’s hard to put a dollar figure on because it’s priceless..

Backstage, Lil Nas X was overheard telling a friend he was nervous before the show. Asked why, he said he was most concerned about walking down the runway. “I’d never done that before,” he said.

But like any smart person, he sought advice and it all went smoothly.

“I had so much fun,” he said. ‘One of the models really helped me. They said, ‘think of somebody that you don’t like. And then put the stun on them. I said, ‘ Ok I can do that a little bit.’”

So If you’ve been wondering why the models on the runways this week look like they would eat you for lunch, if you even so much as asked them for directions to the bathroom, now you know.