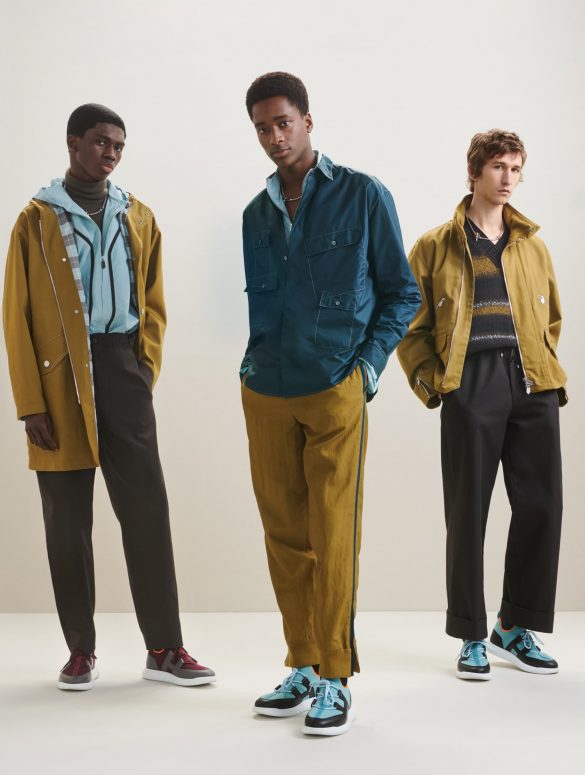 Bringing Performance and Life to Word and Clothes

Cyril Teste, who directed the men’s live stream men’s spring show, is a visual theater artist who studied at the École Régionale d’Acteur in Cannes then at the Conservatoire national supérieur d’art dramatique de Paris – the national academy of dramatic arts – and then founded Collectif MxM with other performing artists. The collective latest performance pieces were Opening Night with texts by John Cassavetes in 2018 and a new adaptation of Anton Tchekhov La Mouette (The Seagull), which just opened last mid-December in the southern France town of Annecy.

The thrust of the collective’s work is the interplay – a complex game – between the artificial and the real live performance action on a stage or a location with the juxtapositions and manipulations of lighting, images, and sound. The operating charter of the Collectif MxM contains the group’s operational principles that must be adhered to in each production: film performances are a form of theater both in performance and cinematic; film performances must be filmed, edited, and realized in real-time and under the eyes of the public; film performances must be filmed in natural decorations or a theater stage; music and sounds must be in real-time, and the length of any film must be the length of the filming.

Another of the Collectif MxM’s charter spells out the storyline’s role or the theater-cinema piece’s actual narrative – that each film performance must come from a theatrical text or an adaptation of a theatrical text.

For this Hermès film performance for the men’s fall collection, Teste again worked together with Véronique Nichanian, the artistic director of men’s universe creative since 1988, to create a live performance on broadcasted via seven small screens with models traveling up and down a giant white staircase, interacting as they pass each other from the rooms inside to finally out to the courtyard in the early afternoon. The show was staged live in Paris at the Mobilier Nationale – the national Culture Ministry service agency that administers the furniture manufacturer Les Gobelins and Beauvais and oversees all state furniture and conservation. Tilted ‘Intérieur/Extérieur/Jour’, the performance lasted just about 8 minutes, ending at precisely 14:09 CET time.

The live film performance observes all the rules of the charter of the Collectif MxM, including the strict theatrical rendering of the text of the Carnet de collection, PAP Homme AH21 – a booklet that always accompanies any Hermès men’s shows to guide the audience to the season’s precise shapes, materials, colors, and fabrications. Words to describe the clothes come alive as the models wear the clothes that are in actuality the words and phrases of the Carnet in a live motion of soft and relaxed shapes that transgressed the confines of casual/formal, inside/outside, day/night but absolutely not that of luxury.

The words of the Carnet de collection booklet are like the verses of a theater piece, written so that to be brought to life, not with actors performing their lines, but with these models walking around in these fall clothes in soft tones hues or more precisely as written – ‘licorice, pepper, charcoal, petroleum blue, cumin, sulfur, absinthe, glycin, and H red.’

Thus, these lines from page 3 of the Carnet state ‘parkas with hood, biker blousons with high collar, zipped straight blousons with contrasted double stitches pocket’ that on live stage means a double face brown plaid zippered coat with beige drawstring pants and black cashmere polo, H red leather zipper blouson with a print knit sweater and loose black pants, and a grey leather jacket with one large patch pocket in front and on one sleeve. And ‘three-button jackets and playful unframed patch pockets or leather pockets’ refer to a slim fitted cashmere charcoal pantsuit or the only other grey suit worn with a mustard polo.

In this calm and control collection with a great selection of clothes, the blouson in its various iterations – green plaid rainproof, reversed shearling, cotton mustard zipper front, a grey leather bomber – is the new version of a jacket. And a black cardigan, black zipper polo, and black pant look more formal than the two single breast suits shown.

The show felt like another universe far away from the fashion superhighway’s noisy intersections where fashion designers coopted artists and stagecraft instead of making desirable clothes. There are no trends here to really speak about as trends are inconsequential and aren’t really part of the brand thinking process. Instead, there is continuity, and there is innovation, making something even better.

At Hermès, luxury is personal – the personal interaction of the individual and the brand’s products. In one scene, one of the model wearing a deep rusty crocodile parka, mustard shirt, and brown pants stopped in the middle of the staircase to greet two other models, one in a red leather long sleeve shirt and dark chocolate pants and the other in a brown short sleeve leather tee shirt and brown pants, chatting as one of the models showed off a new watch. The interaction is so casual that it was difficult to recognize the soft crocodile parka on one of the guys.

That is precisely the essence here – there is an incredible amount of time and resources extended into specialized fabrics – softer, more durable, water-resistant, and so forth. That the real crocodile parka looks almost like a sweatshirt testify to this high level of technical innovation at the forefront of all of Hermès métiers.

And one métiers share knowledge and crafts with another – take, for example, the charcoal grey knee-length leather zipper hooded coat, and look very closely at the top of the patch pocket on the front. One on the sleeve, there are several visible white stitching with two longer stitches on the side and a shorter one in the middle. These stitches are realized with the craftsmen from saddlery in a process called piqûres filantes or piqûres étrivières – a special process of inserting the needle into the very thick leather to make those horse saddles.

One special aspect of Teste’s theatrical performances is that the audience is deeply involved in staging and the process of creation that they are witnessing. I am lucky to have a chance to see Teste’s Opening Night toward the end of May 2019 at the Théâtre des Bouffes du Nord in northern Paris, not far from Porte de la Chapelle where the French actress Isabel Adjani played an imaginary actress in the most compelling live theatre I have ever seen.

Viewing this Hermès show this time and the last in late June last year online is to realize how important the live experience is. Teste is correct that the observer/audience is part of the staging, the production, and the mise en scenes in his creative theatrical performance, whether the film performances are words from a play or words from a fashion booklet describing the finer details of a new collection.