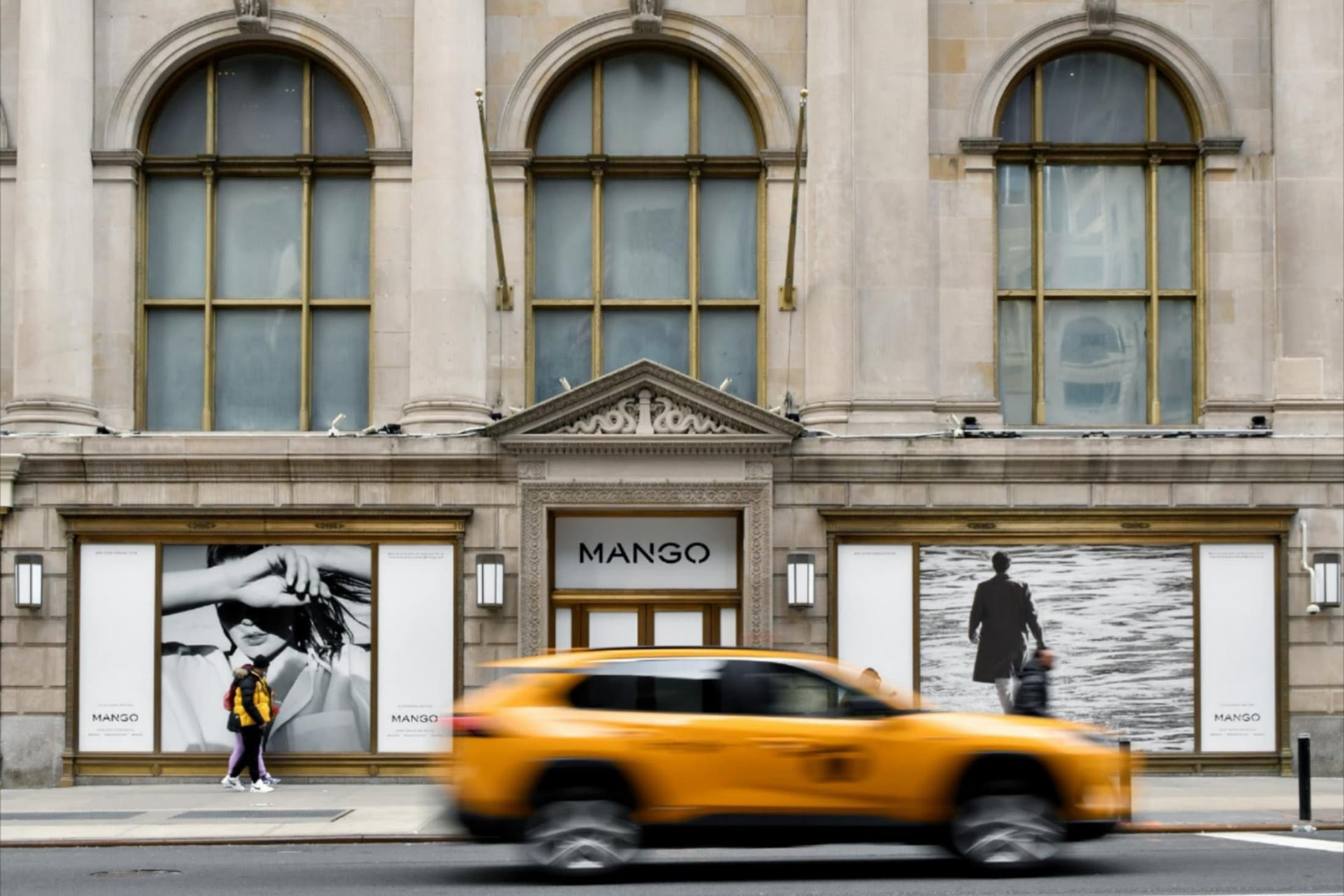 Mango, one of Europe’s leading fashion groups, is accelerating its expansion in the United States with the opening of a new 2,100 m2 (close to 23,000 sq. ft) flagship store located at 711 Fifth Avenue in New York, one of the world’s most exclusive shopping streets.

The opening of this new flagship store is a major step forward in our strategic goals for international expansion and our distribution ecosystem, but above all it is the first step to consolidate our brand presence in the United States, one of the most important markets in the world.”

The store, which will open to the public this week, is located at the Grande Dame building on New York’s emblematic Fifth Avenue, a historic building from the late 1920s which was formerly the headquarters of major companies such as NBC, Columbia Pictures and Coca-Cola.

With the opening of this new store, which will stock the Woman, Man and Kids lines, Mango will present its latest collections for Spring/Summer 22. On the one hand, this will include the more formal line of the 90s-inspired capsule collection, full of on-trend colours such as yellow, green and pink. On the other, it will also feature more relaxed and Mediterranean-style collections, such as the so-called Visions of Summer, with linen and cotton as the star fabrics and in more neutral tones, such as brown, white, blue and orange hues.

A project with a low environmental impact

The architectural project of this new store has been conceived to general a low environmental impact. In the creation of the space, the existing structure has been respected, and a second life has been given to the floors, ceilings, lighting and installations. In addition, the interior coverings have been produced using biodegradable organic materials. In total, up to 70% of the materials have been reused in this project.

The store will also feature Committed Boxes, containers where customers can deposit clothing and footwear to give their garments a second life.

True to its commitment to sustainability, Mango is undergoing a transition towards a more sustainable and environmentally-friendly business model. To achieve this, the firm has established four cross-departmental blocks that affect the entire activity of the company, from garment design and manufacture to the logistics for the same and their selling channels, whether physical stores or online.

The opening of the New York store is the starting point of the expansion plan Mango is promoting to consolidate its brand in the country. To achieve this, the group plans to open approximately thirty new stores in the next three years, especially in the south of the country, to bring the total to approximately 40 stores by 2024, combining its physical presence in shopping centres with standalone stores.

During the first phase of the plan, Mango has sought to extend its presence in New York City (both in Manhattan and in surrounding areas), where it currently has five stores (including the store opened today and the first store opened in SoHo).

From now on, in the second phase, Mango will focus on the state of Florida, where it plans to open between four and five stores in 2022 and 2023 in cities such as Miami, Boca Raton, Orlando and Tampa.

Specifically in Miami, in July the company will open a new store in Lincoln Road, one of the busiest shopping streets in the country, located in the South Beach neighbourhood, which houses over 200 stores and brands. Between July and August, Mango will also open two stores in the Aventura Mall and Miami International Mall shopping centres.

In the third phase, which will commence in 2023, the company will continue to expand towards the west with the opening of new stores in Georgia (Atlanta), Arizona (in cities such as Phoenix and Tucson), Texas (Houston and Dallas), Nevada (Las Vegas) and California, where the target cities for the group include Los Angeles, San Diego and San Jose.

As well as the expansion of physical stores, the group will mainly promote its online activity, based at Mango.com and in marketplaces, the aim being that this will generate 70% of the business generated in the country.

The three year goal is that the United States will become one of the group’s top five markets in terms of sales.

Mango in the United States

Mango has been present in the United States since 2006. The company strengthened its commitment to the North American market in late 2017 with the refurbishment of the SoHo store and with the agreement with Macy’s in 2019 to accelerate the firm’s online growth in the country.

Last April, the group entered homeware market in the United States with the launch of its homeware essentials line (Mango Home) via its website.

In order to establish closer ties with the American fashion industry, Mango has signed an agreement with the Parsons School of Design, one of the world’s leading fashion schools. The agreement was signed yesterday in New York by Toni Ruiz, Mango’s Chief Executive Officer, and Ben Barry, the Dean of the Parsons Fashion School.

According to the latter, “Parsons School of Fashion’s MPS Fashion Management Program is excited to partner with Mango to award scholarships to students in this new and expanding degree program designed to prepare a new era of fashion business leaders. Through Mango’s support, we can increase access to this program for students whose life experiences and perspectives are greatly needed by the fashion industry to identify challenges, develop creative strategies and develop new pathways.

The aim of this agreement is to support the new generation of world leaders in the fields of design and retail through training scholarships. What is more, Mango will participate in the educational courses of Parsons (especially in the Fashion Management Program), by contributing its know-how and international experience of the fashion industry.

The agreement between Mango and Parsons will have a duration of five years and will involve the creation of a fund of 250,000 dollars to finance the studies and the development of students registered on the MPS Fashion Management Program. This course covers areas such as technology, sourcing, marketing, merchandising, entrepreneurship and new business models adapted to the needs of the industry.

In the Metaverse with Miró, Tàpies and Barceló

To celebrate the opening of its flagship store on Fifth Avenue, Mango has created a collection of NFTs with the artworks of three acclaimed Spanish artists: Joan Miró, Antoni Tàpies and Miquel Barceló.

The new store on the New York avenue will, for eleven days, become a physical, digital and virtual museum, offering customers of the brand a unique experience that unites art, fashion and technology.

Fifth Avenue will house the physical works of the three acclaimed artists, together with screens displaying the NFTs. The collection will also be displayed in the Metaverse, specifically at the coordinates 16.78 of the Decentraland Museum District, synchronising a physical, digital and virtual experience.

Together with different artists, Mango has reinterpreted two works by Miró (Oiseau volant vers le soleiland Tète et Oiseau), two more by Tàpies (Ulls i Creu and Esgrafiats) and one work by Barceló (Dilatation), giving rise to five NFTs. In the interpretation of the works, the artists have incorporated various Mango garments from the collection currently available in the store.

As it did in March to celebrate Metaverse Fashion Week, Mango will display the five works in a virtual space in the Decentraland Museum District. In parallel, the five NFTs will be uploaded to the OpenSea platform, one of the leading marketplaces of non-fungible tokens, which use blockchain technology, but will not go on sale.

To develop the digital works, Mango collaborated with the artists Farkas (of Argentinian-Hungarian origin and based in Buenos Aires, who specialises in digital art) and Marcos Tamargas, one of the leading artists on the Spanish art scene, who since 2019 has been painting portraits of all the women who have received the Nobel prize, as well as Adri Bonsai, winner of the Goya for the best animated short film in 2018.

In addition to the five artworks in NFT format, Mango has developed four new wearables (which will go on sale) and a POAP (Proof of Attendance Protocol), a type of NFT that accredits attendance at an event.