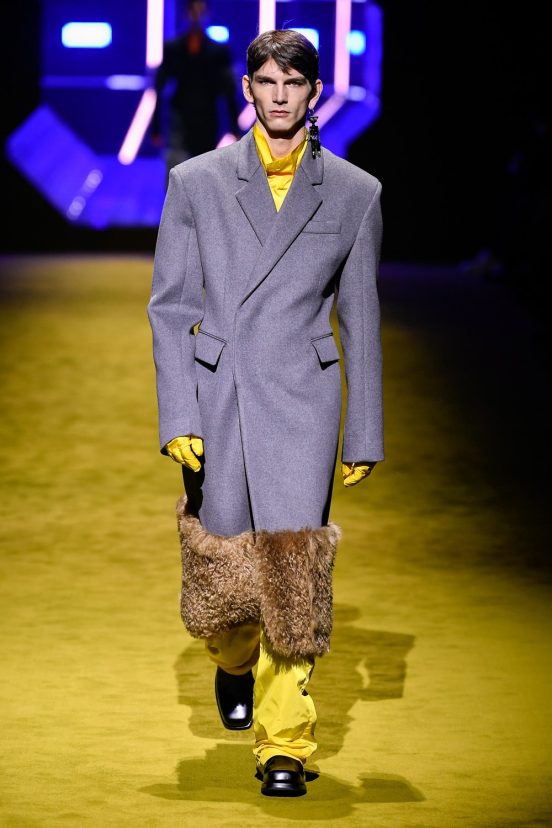 From Blurred Categories of Labor and Leisure, A New Utopia

The creative director partnership of Miuccia Prada and Raf Simons presented a collection that not only was the best showing of Milan’s Fall 2022 menswear season, but also felt like a prescient consideration of the meaning of menswear itself.

It was also a look back at Prada’s own history, with the presentation marking the tenth anniversary of the house’s iconic Fall 2012 show,. That featured ten seasoned actors, including Gary Oldman and Adrien Brody, alongside younger models. Referencing and reconfiguring this approach, the Fall 2022 show also included ten actors, with Kyle MacLachlin opening and Jeff Goldblum closing. The quietly commanding presence of these suave older gentlemen augmented the collection’s sense of dignity and poise.

The collection balances and interweaves two typically very distinct categories, sophisticated tailoring and workwear, treating both sartorial disciplines equally with the same vision and meticulous approach to form and craft. The first four looks – wool trench coats and double-breasted jackets with wide, over-exaggerated shoulders (a tailoring theme that runs throughout the collection) – sit atop pants of shimmering technical fabric that appears like both silk and nylon. The following two looks then mark the revelation that these pants were in fact part of a single piece, a boiler suit or set of coveralls.

Leather trench coats follow, cinched at the waist, then rubberized shirts with matching pants and gloves, then elegantly constructed knitwear with more technical pants. Each ensuing ensemble develops the hybrid theme, blurring the lines of functionality and fanciness with laser focus.

Details small and large exude dignity, intentionality, elegance, and precision: the hidden buttons of jackets, the simple geometry of the triangle backpacks, the tech mohair elbows and hems of coats, which appear again on technical outerwear.

The runway sequence typically pairs two looks together which feature the same or nearly the same pieces in a different color palette. The smart approach serves to emphasize the focus and excellent form of the collection and its elements.

While the colors (of which more than half are black) of the collection are almost entirely solid and devoid of pattern, three pieces appear in the middle of the show with prints that hazily blend natural, human, and industrial imagery.

There are certainly conversations to be had on whether the ongoing, massive trend of workwear being incorporated into the vocabulary and culture of “fashion” – as something distinct from everyday life, everyday clothing – is not, in a sense, a sort of gentrification. Certainly nobody will ever do the sort of work done in a boiler suit in a Prada boiler suit.

But, abstracting from the physical and historical reality of workwear and considering it as a conceptual category, Prada unifies and infuses the traditionally separate realms and identifiers of labor and leisure, pedestrian and sophisticated. As Simons explains, “The approach is to make all garments equally important. Worn under coats and suits are lightweight material overalls, deux-pieces, referring to the idea of work, movement, activity, and leisure. They are rematerialized, to give a different importance.” These opposing categories are only meaningful in their opposition to each other. By synthesizing them, Prada draws out the single idea that makes them both meaningful, the humanity that is expressed by both existence and achievement, being and becoming.

In this way, the collection is utopian. Through languages of the past and present – material, tradition, craft – Miuccia Prada and Raf Simons imagine another reality, a new future. It is a future liberated from an oppressive distinction between categories and classes of leisure and labor, where work expresses the human spirit, where the material and the physical no longer serve to confine freedom, but embodies it.