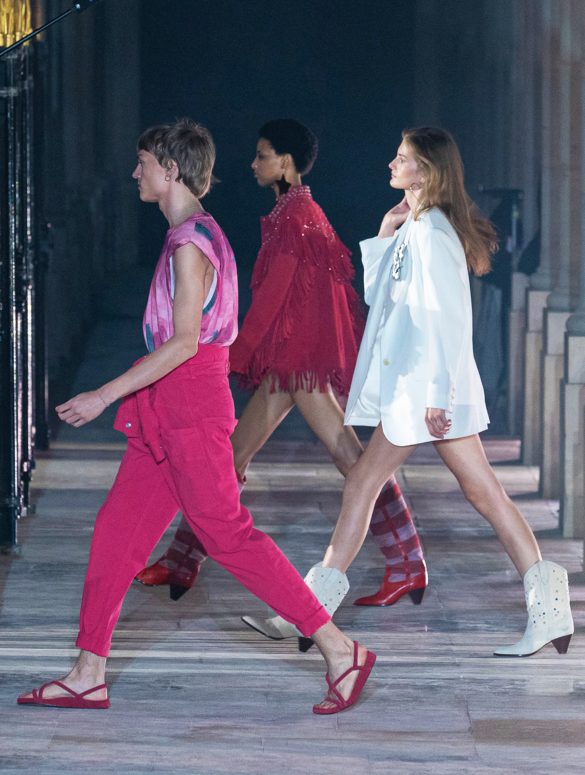 The fourth day of Paris fashion week started and ended with strong affirmations from the designers here that their work and their fashion were not about frivolity subjected to dismissal during this period of profound social and economic crisis and uncertainty (also political for many others) but that their ‘fashion’ is about hope and about transformation.

From the defiant Rick Owens show in Venice to the soft and quiet elegance at Chloé, designers plowed ahead with their work despite whatever pandemic difficulties they may have faced. Then there is the spirit of playfulness of the French designer Glenn Martens with his extremely complicated constructions, even on a pair of brown cotton jeans.

In the little over three years since Natacha Ramsay-Levi joined Chloé, this graduate of the Studio Berçot fashion institute in Paris who has spent over 15 years working as the right hand to the designer Nicolas Ghesquière, first at Balenciaga then at Louis Vuitton, the designer has a singular mission to create the sophisticated yet casual style and clothes for the house but also to buttress the new mood and aesthetics at her Chloé for the young fashion women – the house’s target customers.

Ramsay-Levi’s roadmap for Chloé is to create and evolve a new sentiment and new clothes for the French women’s style that is unique to Chloé over the years, but one in which the designer focused her attention on creating garments that reside at the boundary of the classic and the avant-garde without steering too much in either direction, which would stray from the ethos of this nearly seven decades old Parisian fashion house.

In this season’s show titled ‘A Season of Hope’, Ramsay-Levi sharpened her skills to hone in on the essentials of Chloé in a live physical show with giant screen monitors showing the models as they were entering the steps of the courtyard of the Palais de Tokyo – a stage setting that not only captured the Parisian roots of the house but also pointed to the designer’s laid back approach to making the kind of friendly clothes that can blend into a street walk on a Thursday afternoon in Paris. These are clothes as the girls came out of the TV screens from the street to the actual runway inside the courtyard offered the metaphor for Chloé this season – these no nonsense garments are made for life, now offering these women realistic but still dreamy choices for their wardrobe in the near future regardless of how the pandemic evolves.

Simple perhaps but also very refined, the clothes in different combinations of colors offered the Chloé girls new but familiar items for their wardrobe – light pink loose long sheath dress with lace rectangular inserts, light mustard long shirt dress with a side waist belt and front patch pockets, two-tone olive/khaki short puffed sleeve dress with a large black leather belt, or separates like a green knit and cotton pants or patterned mock neck blouse and faded jeans. The overall silhouettes in the dresses and the oversized pants and woven blouses now are much more relaxed and fluid like the bottom panels of a light pink printed dress that blew lightly in the wind as the model walked into the courtyard with her brown leather flat sandals. Ramsay-Levi left behind many of the embellishments and embroideries prominent in a few of her past collections as the need for such adornments now seemed more than ever obsolete. These spring clothes can surely stand by themselves.

In a nod to align the Chloé brand values with the values of the prospective young women, Ramsay-Levi collaborated with the estate of the American artist Corita Kent, who was known for her colorful silkscreens ‘Serigraphy’ work, with slogans from her work in the 1960s to raise consciousness about social power through the embrace of community. Fragments of Kent’s work – Hope, 1963; Give the Gang Our Best, 1966; I Can Handle It, 1966; For Emergency Use Soft Shoulder, 1966 – are printed on pink knit sweaters, a long spread-collared cotton shirt, or on a white tee shirt worn underneath a light orange wool patch pocket utilitarian single-breasted jacket.

The red letters of the word ‘HOPE’ embossed on the brass buckle of a leather belt signifies in a subtle way Chloé’s immersion into the community of socially active women for whom words matter as much as actions. Words on these Chloé garments create a potential space where the brand can offer this sense of belonging together with the customers in a common cause, sharing common values.

Kenneth Ize, the 2010 University of Applied Arts – Vienna graduate in fashion design, Austrian-Nigerian designer, and 2019 LVMH Prize Finalist opened the Paris fall show season last February at the Palais de Tokyo on that first Monday evening with Naomi Campbell closing the show that celebrated his creative use of African artisanal fabrics and crafts in colorful mixtures of garments that drew attention to the continent’s traditional methodology and crafts that may be on the verge of extinction.

For this season, Ize stayed firm within his aesthetic roots with a small collection of both men’s and women’s easy clothes built around the colorful hand-woven Nigerian fabric called asoke (top cloth) with intricate striped patterns. Ize’s collection is crafted around this traditional fabric that is embedded with cultural meaning as the pattern and the visuals on the fabrics are symbols that reveal hidden meanings and stories about local traditions and worship.

In a very focused collection comprising of just 13 looks – 6 men’s and 7 women’s, Ize concentrated on sharpening his narrow cut shapes with a lean, close-to-the-body strappy dress paired with flared pants, slightly slouchy shaped single-breasted jacket belted at the waist, or one with longer sleeves and 70’s hippie pants and a purple double-breasted coat-dress that demonstrated the work of local tailors. The men’s looks comprised of easy pieces – short sleeve loose shirts, slim pants, tank top, and a great sleeveless jacket cut in the front in the shape of a dress – all in the combinations of the colorful asoke fabrics.

The small spring collection showed Ize’s focus on doing what remains unique for him – traditional fabrication with garments that reflected his upbringing in Austria. This kind of living and seeing and experiencing different cultures is an important aspect of the global youth community and Ize has a unique perspective seeing life and fashion from this angle. Hope he can maintain and slow growth in the coming seasons.

On another note, Ize should also reflect on how to expand beyond what he knows best and see what fashion can offer him outside his immediate horizon.

In the airy courtyard of the gardens of the Palais Royal, devoid of the usual tent in favor of the vast open air space, Isabel Marant staged her live show with a limited audience and with a lively set of choreography in partnership with (LA) HORDE, a collective founded in 2013 by a trio of artists Marine Brutti, Jonathan Debrouwer, and Arthur Harel, using performances to questions the codes of various artistic disciplines. Since September 2019, the trio also heads the Ballet National de Marseille but (LA) HORDE continued their work with different communities, especially online like TikTok’s new dance forms like ‘jumpstyle’ that have been popular with netizens. Of course you have heard of Renegade, Cannibal, Say So, Hit Every Beat, and Hey Boy.

The young and energetic performers from (LA) HORDE wore mixtures of street styles in mostly hues of bright pink danced their way around and surrounded the models as they made their way around the rectangular courtyard. Combining a dance performance with a live fashion isn’t a new concept – Dior engaged the choreographer Sharon Eyal for the spring 2019 show where dancers weave in and out of models walking the floor, and this past February Marc Jacobs worked with dancer Karole Armitage in his spectacular fall show at the Park Avenue Armory.

That said, Marant’s choice of (LA) HORDE may be more of a strategic business choice as well as an aesthetic one due to the group’s popularity online, especially on the must-do TikTok platform. Aligning the brand toward this demographic is of strategic importance. The show sure was livelier and more expressive for Marant this time than in previous seasons where a straightforward runway shows to very loud music seemed repetitive each time.

As for the clothes, Marant remained true to her fashion heart and true to her aesthetics of the disco 1980’s with very short hemlines. Marant never missed a chance to use those shiny fabrics that began this season with a light purple metallic oversized pant with attached ‘bretelle’ and a cotton puffed sleeve blouse and metallic silver sparkling cocktail dress with ruffled trims and a giant front bow. Even the guys had their own sparkles – silver metallic blouson and pants, hot pink zippered jacket, or light short-sleeved shirt paired with white graffiti pants. The classic Marant codes were all present – the round v-neck puffed sleeve short cinched dress, the multicolor short-sleeved micro cocktail dress, or the white jacket and white graffiti hot pants. Many of the dancers’ outfits were also great like jeans shorts and yes, pink or blue sparkling tights.

It was a nice moment no matter what to actually see the dancers, at one point at the end hugging each other sometimes in groups of three, something normally no one ever would even notice in Paris but now such a simple gesture seems so forbidden and so far off for so many off the stage at Palais Royal.

In a continuation of the video tutorial he premiered for the men’s presentation in July, Glenn Martens of Y/Project continued this projection with the women’s spring collection showing the high versatility of his clothes that can transform from sweater to short coat by snaps and zippers placed along strategic areas.

In the video a green snakeskin printed rolled-up sleeve dress can be unsnapped into a long dress with open slit sleeves or a black polo dress can be unzipped into a strapless corset dress. Those spring shown here were just the more commercial versions yet they demonstrated the intriguing and complicated pattern making and construction procedures, procedures that often had historical references piled on them on the runway.

Without the possibility of staging an actual runway show, Martens also was able to make some new spring clothes using what he had on hand, working with his team remotely with an examination of his own work in the past seven years since the Y/Project launched to consolidate what the essential meaning of the brand in its vision of the mixture of versatility, eclecticism, and playfulness as the means to alter our basic perceptions of clothes blending references, cuts, and fabrications.

By versatility, Martens meant the actual transformation of one garment as seen into another – say a brown leather coat with snaps under the sleeves and sides that when opened became a poncho worn over a grey sweatshirt, a red sparkling long skirt paired with a black long sleeve shirt with the skirt opened up to become a long evening dress or a black striped cotton shirt may also become a short dress. And why not make a simple pair of faded jean with a waistband that can open to reveal another attached pant underneath the waistband or even nothing? Collars become shawls, scarfs become skirts, and sweaters become corset tops. The leather and cotton jeans with flame-shaped sides are the fun additions for spring.

The transformation may look simple but in the video the model required the assistance of two experts probably from the design team. That meant Martens designed the clothes with such a command of technical skills especially in pattern making in order to achieve this level of versatility not apparent to the eyes when seeing the clothes in its before or after states. French designers with this level of technical skills like Martens are a rarity nowadays but it should be considered as a national treasure in Paris.