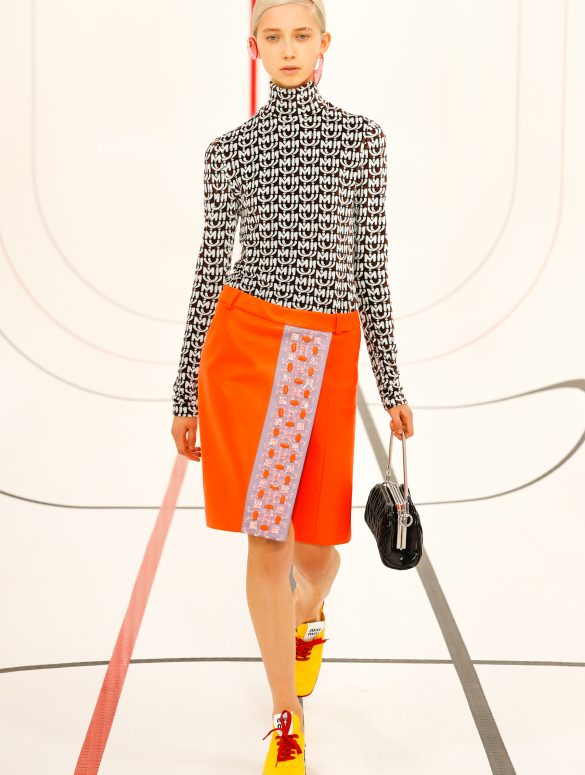 The Miu Miu spring runway live stream show was fashion’s version of the NBA bubble that players were subjected to in order to complete this season which is still in progress as the LA Lakers are battling the Miami Heat in a contentious Game 4 final today with the Lakers leading the series 2-1. Just like the NBA no in-person attendance, Miu Miu substituted the empty rows at thier digital show with walls filled with monitors with invited guests – influencers and ambassadors for the brand – who seemed to be looking and chatting about the show as they were watching.  All with a soundtrack of cheering from the crowd at a live sport event no less.

Miu Miu’s fusing of the physical and the digital shows addressed the issue of holding fashion shows today in the middle of an ongoing crisis. With an elliptical stadium crafted by AMO, the Milan based architecture team, the show simulated the actual environment of a sport match where models were the athletes while different groups of global spectators participated via multiscreen hook up as they can be seen cheering and clapping as the model passed by their sections.

This interactive show added the human dimension to the digital experience of watching a live stream show. You feel like you were actually there, well almost, but there is a huge difference in how audiences react to seeing shows online with a digital crowd being displayed.

Simply put the digital audience was more involved in the proceedings going on in their screens. In addition, Miu Miu collaborated with Instagram to add an augmented reality filter to enhance the experience of viewers of the actual show space. I sensed there was more space as if I was actually looking at the models coming and going when I was looking at the live stream this morning.

Like any other professional team sports, team Miu Miu has its own set of cheerleaders, a ‘community of women simultaneously connected and instrinsic to the show’ is how the brand’s Instagram describe them. They are among the groups of women that Miu Miu have cultivated over more than the last decade as sort of like a club of like minded young women who share the same ideals, aspirations and perhaps the same inclinations for the kind of clothes and accessories that the brand makes. ‘Around the world, Miu Miu invites audiences of women to gather together to view the show – simultaneously connected, their nurturing and support of one another, their pursuit of shared values and goals. This season, those communities of women are intrinsic to the show itself,” said the brand’s Instagram post.

Creating communities like these have also been an integral and essential part of how Miu Miu interacts with its audience and customers. The Prada Group brand has been strategic with this endeavor, long before today and long before other major fashion brands initiated this practice. By example Miu Miu has created a now decade-old seasonal short films circut created by women filmmakers around the world with its Women’s Tales series. Now these women watching on the multiscreen are there to support their teams.

The sport arena setting, the digital live audience and the augmented reality enhancements all were the staging accouterments that enhanced the experience of this fresh and very upbeat Miu Miu show with clothes that were more simple in their compositions and linear in their shapes but also clothes devoid of much of the polish and more ornamented collection for fall 2020 shown six months ago, well that seemed like a lifetime ago.

The opening look worn by Lila Moss  – a black slightly oversized single breast jacket with shoulder blue panels over a blue nylon zipper blouse and a crinkle bubble micro skirt – ushered in the more sport feel of the collection where all the coats, jackets and knit have the Miu Miu logo embroidered or printed on just above the heart just like where any sport team jersey would have placed their team insignia. These are not exactly uniforms for a sport team but rather the mix and match clothes – the jacket of this opening does not signify any sense of formality and the black shiny bubble fabrics hot shorts doesn’t veered into an evening category. This look and those that followed feels much more like how these younger women would dress now as dressing to go anywhere specific is at best uncertain so that special dress for a special dinner or evening out has thoroughly lost all meanings.

What’s great about this show is really the fact that these Miu Miu clothes don’t feel like they are new clothes, maybe a predicament of this current time when something shiny new and with a bit of that aura of ostentatious is out of bounds, or worse, out of touch.

Here is the spirit of how these young women would put on their different assortment of clothes, in a time when going in and out of the house has become very different in spirit and also in clothes. The spring clothes reflect a remarkable change especially from the more elaborate and more embellish fall show merely six months ago – a change of mood and temperament and a sure change of wardrobe. Now a light pink coat, a black turtle neck and a pair of hot pants would suffice.

The blouson and a knee length skirt, a Miu Miu signature look over the years, now came as green and white pattern zippered jacket and black and orange skirt or a version in red zippered track jacket and a green and punk plaid skirt. The clothes outline a new sentiment of fashion with the feel of ease of the lean shapes and the easy approach of each garment that can all be interchangeable.  These shifts though does not change the Miu Miu signature like the color block stripe turtleneck short sleeve knit paired with an orange short skit. That’s sport and that’s a bit couture too.