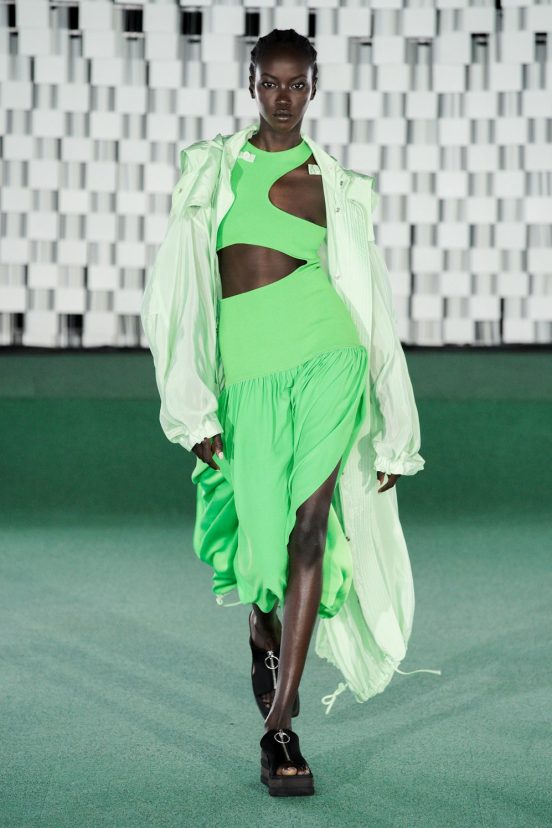 Into the Future with Intended Streamlining and Focus

“In fashion, mushrooms are the future,” the voice of Paul Stamets said poetically in the short few seconds moving image showing close-ups of a pink inside of the mushroom. Stamets is an American mycologist who advocated for more widespread use of fungi in medicine and various food forms.

Indeed, Stamets is correct in saying that mushroom has a great future in fashion.  Mushrooms are the latest in the drive towards sustainability, meaning less waste and less pollution in the production and consumption of fashion products. For example, mushroom leather is a vegan-friendly material used as an alternative to animal leather.

“For hundreds of millions of years, fungi are the foundation of life we found today, and they offer to hope to protect us tomorrow,” Stamets said in a voice recording at the live showing. Then, the first model came out in a leaf green double-sided cut-out dress with a side slit skirt and a light lime green loose trench coat, a look that combined both the linear and the slouchy that permeated throughout in the shapes of the garments.

McCartney’s message for her fashion has gotten much simpler and more focused since the pandemic. Not only had the lockdown forced her to not only cancel the big Paris shows at the Opéra Garnier, but it allowed a time for introspection, to think about the kind of garments she and her customers would want to own.

It’s been really about reopening again, and it’s last-minute that we decided on this live show but done differently. How do we have an emotional experience again? How do we feel people again?” Stella McCartney said post-show from Paris via Zoom.

There is a clear sense of clarity in this Spring 2022 live show announced at the last minute last week just before all the actions started and staged at the Espace Niemeyer in Paris, aka the former headquarter of the French Communist Party.

It is more of my personal style, more old school, and what I would want to wear. These simpler shapes make the clothes easier for customers and the idea of being more focused with greater attention on our intention,” McCartney said in response to my question about this fashion transition in the last few seasons.

However, that focus on simple silhouettes did not negate the attention to details and the information in the prints, the dangling white fringes falling of an ice blue knee-padded utilitarian pants that accompanied a drop shoulder lengthened one button single breast jacket. With a black cut-out tank top and these motorbike pants, McCartney presented a less formal approach to wearing a relaxed pantsuit.

All the fringes in white and various knit fabric sprouting out of the knit like a strappy knit corset, a light cotton green pant paired with an asymmetrical crochet sweater, or a red/white print motif corset dress. These fringes are like the tentacles of Enokitake white mushrooms used in East Asian cuisine.

Streamlining a collection does not mean stripping the clothes of the idea of escapism, as seen in the sequin sparkle long-sleeved tee shirts and mint cotton pants or a light sparkle camel jumpsuit that can work for both day and night.

The idea of escapism in fashion is also an intended idea that I wanted to come back to in this collection. And, it is the notion of a transition, this period of movements into what will look like the future in the merging of luxury fashion with keeping the planet healthy. There is the subtle tailoring, the simple and sporty lines, the idea of revealing part of the body, and a lot of the softness. It’s like wanting to wrap yourself in a soft cotton trench. It’s effortless,” McCarney responded when I asked her about this shift in her fashion temperament.

“It is about exploring different extremism but ending up with clothes that are more wearable.”

As for the mushroom part, well, the music of the live show was the sounds of mushrooms growing in a lab. “They are not animals, and they are not vegetables. We have used Mylo in products before, but the ‘skins’ are a bit stiff, and only recently has it been possible to introduce the materials into fashion in general,” the designer said. Elsewhere, regenerative cotton, forest-friendly viscose, and animal-free glues (no egg whites used) are the essential material components of the clothes that will accompany the new bags made from Mylo vegan leather.

The younger audiences are more than ever aware of environmental damage – Earth Guardians, Climate Generation, Extinction Rebellion, Youth Climate Movement, Sunrise Movement, SustainUS, or The Alliance for Climate Action. It is no longer possible for fashion brands to avoid the subject of waste and pollution. But as McCartney noted, the word “sustainability is so overused is so confusing as to what it means.”

I am desperately trying to open everyone’s mind. There is no less luxury in what I am showing and the products I am making. There is a shift in the mindset as well now if you look at the food industry. Less polluted and wasteful practices are now standards and less of a concept. The business model is shifting in fashion and elsewhere. It’s changing because people are connecting the dots. It is no longer just about what you wear,” McCarney said.

But, when it does come to what to wear though, there are plenty of reasons young consumers would choose among the different offerings of jackets, pants, dresses, and knitwear in this Spring 2022 collection. And, McCartney’s more focused approach may also have made this choice for her consumers a lot easier and surely friendlier to the planet.