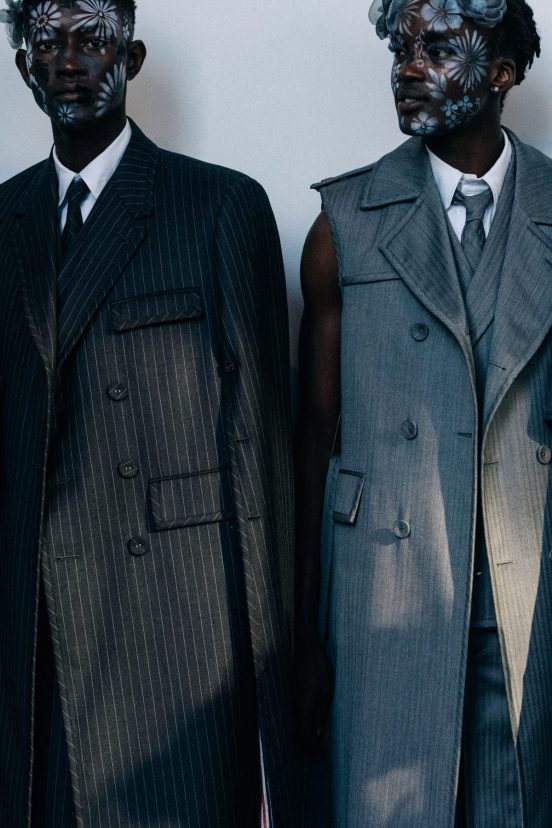 Midnight in the Transformative Garden of Sartorial Fantasy and Reality

It was a grand house, a beautiful house. In the center of a beautiful garden, the garden was forgotten, yet not forgotten. Twenty sculptures, in twenty colors …” describe the imaginary house only with the remnants of a foundation and a bunch of hanging wooden plank window frames. In actuality, twenty figures sat around the perimeters of this fantasy house and garden as still as sculptures wearing a light grey cape made of hundreds of individually cut tulle hand-stitched in various layers to foment a depth of light and shadows.

For this new Spring 2022 show, Thom Browne moves exceptionally this season to New York instead of Paris as a welcome gesture to the city emerging from the pandemic and to celebrate the year of American fashion at the Metropolitan Museum.  Browne departed for Paris four years earlier seeking to expand the business globally.

In a much more pared-down stage setting, the American designer Thom Browne shows his fantastic Spring 2022 collection with a powerful demonstration of the idea and the practice of American designer tailoring and more accessible sportswear clothes, albeit luxury sportswear.

At the Shed, a center for the art theater in Hudson Yards, Browne again deploys his sense of imagination to his seasonal fashion cinematic scenes. Performing acts of transformation, the living sculptures shed their elaborately embroidered floral cape to reveal the all in monochromatic grey wool assortments of jackets/coats, tunics and skirts, and long dresses.

Absent the complex staging, the clothes are just as intriguing, and in particular, intriguingly simple.

The jackets and coats offer a variety of sleeveless, one-sleeve, and asymmetrical long/short mixture of sleeves worn over white shirts and long skirts. The uniformity of the garments made in the light grey wool fabric in the first half shows the designer’s command of the language of tailoring and craftsmanship. Both needed to create the various floral capes severely embroidered with articulate placement resembling a natural garden.

In June 2010, after his men’s show at the Parti Communiste Français headquarters, I asked Browne in an interview for a profile about the difference of process between garments that is fantastical versus commercial clothes. His answer then was simple, and it applies to today as well. “Remember the last look with the huge tulle gown underneath the coat in the tennis show (men’ spring 2007) or the three-legged pants? They’re outfits that are so fantastic. But it’s as seriously made as my basic classic clothing, too. A lot of times when people do more fantastic things, they don’t care as much about how it’s made.” These floral capes here are exquisite in craftsmanship.

As the sculptures became alive, they transformed from monochrome grey into lean shape straight-line dresses. The colorful double layer long tulle dresses in ice blue, bright red, deep blue, and light charcoal grey have a solid base layer than a partially dyed overlay. In a way, making the simple garment looks more complex.

In comparison, the colorful tulle dresses denote a level of simplicity in the long and lean silhouettes, the layer on layer doubling of tulles of contrasting colors with the top layer tie-dyed to give an illusion of a depth of field vision and a sense of three dimensions to these very flat surface clothes. The effect creates the look of a more complex garment rather than just its simple construct.

This trompe l’oeil technique deployed throughout this collection is a Browne specialty first seen in his Spring 2017 colorful pool party loaded complete outfits that turned out to be plain photo prints on the jersey with full zippers in the back. Now the back zippers are still present in one sleeve tunic cape with one sleeve sown with the side of the body. Clothes here aren’t always what they look, and their look is different from the actual garment itself.

The basic silhouette is lean, while the short jackets and sleeveless coats have broad and structured shoulders and a longer body length to below the hips worn with pleated or long pencil skirts. There is asymmetry throughout with missing sleeves like a long grey coat with one short-sleeve paired with a similar jacket, flowing skirt, and cuffed pants. The shoulder lines are solid and broad, allowing the fabric of the body to move.

Both male and female models wore interchangeable clothes, a characteristic that Browne had adopted for several years before becoming a more genderless fashion. The clothes, whether a tunic top and long skirt or a jacket and pleated skirt or even a strapless pant-skirt dress, do not in any way delineate gender differences. There is no gender politics here at all.

The lack of efforts to promote genderlessness coupled with how the models carry what they wear with such assurances erase the established notion that a grey square short sleeve long tunic with a matching skirt and a low heel leather Mary Jane is still outside of this tight arena woman outfit. But that notion about clothes being divided into gender garments as strictly male or female is slowly losing ground.  Changes in fashion are plodding progress, just in the way a change in the physical proportion of clothes can take time for the eyes to adjust.

For example, the classic Thom Browne ‘shrunken suit’ has now been more widely accepted than they were when first introduced nearly two decades ago and how Browne has been able to integrate and expand this silhouette by incorporating and adding on innovative design elements.

Browne began his fashion brand in 2001 with merely five suits that the designer began selling first via appointments in the Far West Side Meatpacking District at Little West 12th Street. Then in 2006, out of a store deep in the Tribeca area on Hudson and Franklin Streets 2006. Distinguished by their recalibrated proportions – shorter sleeves, cropped tight-fitting jackets, shorter pants, those original pantsuits have since become the defining trademark signature look of the brand, with other creations constantly revolving around them.

Having difficulty finding a suit that would fit him the way he liked, Browne at the time commissioned a local tailor in Brooklyn to hand-make five suits with specific details and cuts to achieve a proportion that would enhance his more petite body frame. The length of the jacket was short, falling just above the middle of the pant’s zipper, and the armhole was slightly higher, which projected a broader shoulder. The front panels cut close around the chest and ribcage, thus reducing the appearance of volume, and the sleeves were two inches above the knuckle showing the cuffs of a dress shirt. The length of the lapels was short and cut at a steeper angle, which gave a sharp appearance; the v-neck outlined the prominence of the shirt collar and the ties. And the pant’s legs were just above the ankles.

This Thom Browne classic suit should now have its category like the single breast or the double breast suit, as it is now officially the third suit. The fastidious tailored suit and matching coats create an idea of the uniform in their light grey wool likeness, but when worn, the clothes harbor a sense of individuality at the expense of the uniform. In this Spring 2022 show, the similar long tunic and long skirt don’t look the same on different individuals wearing them.

The thing with these signature coats/jackets/skirts/pants with their white heavy cotton shirt is that the clothes don’t conjure any specific associated meaning or mythologies or say a wealthy lifestyle to define the person wearing them. We can wear the same suit, but clearly, you and I are not the same person mantra is pervasive at Browne and for those fans wearing the garments. And what was once a weird-looking out-of-proportion suit has now become more and more familiar and daresay mainstream worn by basketball players to soon boardroom executives.

Taking away the fantasy of the gardens and the floral cape, here is the new base of American sportswear today with a sensibility stemming from the 1950s with fabrics like seersucker, pinstripes, houndstooth, Prince of Wales, mohair, and step twill. The clothes don’t all look too perfect, and that touch of imperfection lends credence to the fact that these are real clothes for real people, not clothes made solely for a fashion show.

The heart of fashion at Thom Browne lies in that classic piece of clothing in traditional fabrics that look a bit different. Browne’s fashion isn’t radical. Think sleeve sheath tank and long skirt in gabardine wool.

With none of the needs to augment the fashion with nonsensical collaborations that is now a formula repeated too often in luxury fashion, Browne’s pure approach to design and how to show the intricate techniques in such a tidy manner, making say a looks simple and even inviting.

At Browne, the intricate and straightforward clothes are the centerpieces of a complex narrative involving dreams, mythologies, and also very often our preconceptions and assumptions strictly via the sartorial language. The aesthetics at Browne are these physical clothes.

Never before in the actual history of American fashion has a triumph of design and craft as the base for instituting a new vision. Yes, there is the big Ralph Lauren brand that is a global ambassador in the absence of competition. But the Ralph Lauren brand is about creating a particular sentiment of a specific lifestyle in which the clothes are mere accouterments or even as supporting ‘actors’ in the continuous mise en scène portrait of that privileged but achievable lifestyle.

In this intensely and emotionally uplifting show, Browne elevates the idea of American fashion by dousing the excellent cut clothes with the values of heritage and craftsmanship often solely attributed to European brands. The heritage of American fashion in the post-second world war years is not remembered, a nonentity in the consciousness of today’s fashion culture. Whatever ascribed to that era that birthed the nomenclature ‘sportswear’ has been relegated to a few holdings here and there in costume departments at major museums to be a parade in daylight whenever the occasion calls for a display of said American fashion history.