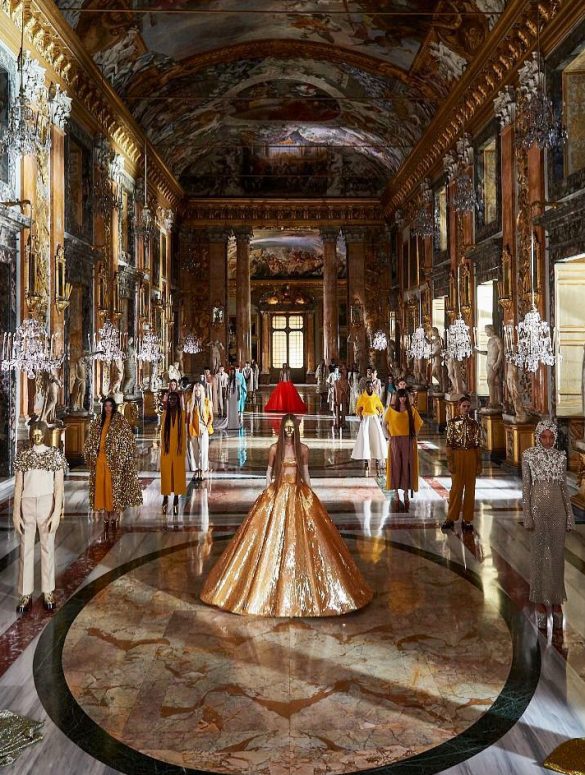 The Rituals Of Couture

The Touch of Humanity in Handcraft Clothes

“The narrative of this collection is the collection itself. A true proposal. I think that somehow fashion has to go back to being fashion,” Pierpaolo Piccioli said in the early morning Zoom hour-long preview of his new Valentino Haute Couture spring show filmed earlier inside the Sala Grande at the Galleria Colonna in Roma – “a large room rich full of mirrors like the halls of mirrors in Versailles and rich with decorations but it also has orthogonal architecture, so the maximalist becomes almost minimal” – as a classical runway fashion show with no other storyline than the story of these special couture clothes.

I am a designer, my language is the fashion show and the collection through that step and those are the values ​​in which I believe.

“But, I think my language must be the same that I wanted to be for a fashion brand. Couture is often also linked to the dusty images of high fashion. Beauty and high fashion are linked to certain images that do not represent today or tomorrow,” Piccioli emphasized the important role of establishing a new realm of feelings and a new way for expressing fashion today.

“I wanted in some way to keep all those processes of couture, therefore the workings, the time, the rituals, the execution, and the love that is put into the care of couture, but also in making a wardrobe that it was contemporary or that it is for today and tomorrow,” Piccioli continues to speak on how he uses the couture process itself to celebrate fashion with the intensity, care, and love of hand labor that create couture clothes.

Piccioli’s words, hardened commitments, and reverence for preserving the artisanal couture method translate into a truly remarkable spring couture collection with spectacular clothes – clothes, mostly daywear, that are simple and complex at the same time. For the first time, Valentino haute couture collection comprises a significant focus on menswear with loose and boxy shapes of large coats and a boxy bright yellow suit with a beaded knit turtleneck.

The collection dubbed Code Temporal exudes the pure essence of couture and fashion design with the idea of making even the most complex techniques and their applications on clothes that are minimalist in sentiment, clean and sharp silhouettes with a special soundtrack by Robert Del Naja from Massive Attack. Piccioli has always put the cultural and the lifetime value of couture at the center of his work at Valentino. He brought out the entire atelier that worked on the collection onto the runway of his couture shows and put in the name of the specific people in the atelier who worked on a particular dress and the amount of time it takes to complete the garment. Even in a film show, the Roman atelier appeared with Piccioli at the end.

Robert Del Naja will present a special document of the making of this collection on January 29th through the perspective of artificial intelligence working along with the artist Mario Klingemman. “The fashion show is the fashion show, and Robert’s art project is a different project from his view as he has never done anything in fashion prior,” Piccioli emphasized the separation of the two projects.

“Couture is not made from sparkling embroideries,” the designer said in pointing to the hand cutting of each of the square of double-face cashmere, then twist into side knots and connect at the knots to make the white long cape worn over a Fuschia wool knit long dress, a look that opened the filmed fashion show. The long process of hand-making each of the square into these knots cape in which the pure and simple shape of the cape thus rendering the complex simply beautiful and simple materials more ‘noble.’

The complex and the simple blend into one garment as a pervasive principle running the entire gamut of this spring collection. An off-shoulder bright pink cashmere double breast coat appears just as it looks like a coat, but in reality, it is, in fact, designed and made as a corset with the outer section of the coat attached that can be opened. “The coat is built on a corset, so the corset acts as the opening of the coat and the construction of the coat. In reality, it is the corset itself that gives structure to the coat,” Piccioli explained the techniques of fusing the two garments into one.

Yet, at times, couture techniques are deployed to make a complex dress look simple, like a long white tube dress built with zippers all around to define the dress’s shape. The collection is primarily daywear instead of more fanciful eveningwear that has been the province of couture since forever. The choices of the cashmere felt fabrics in these pastel and light colors – wool on cotton, knit on cotton, knit on wool – “I liked working with these fabrics so weirdly they give a sense of protection with these colors that are warm neutrals paired with more edgy things instead. I imagined this tough shirt or these high heels, so they take away from this sense of protection that in the fabric the coats give a different element.”

“The man is a wardrobe that can be worn by both genders. As they are garments that can be worn by both men and women, so it is natural to put the men in the show of this collection,” Piccioli said of the 26 of the men looks mostly of daywear clothes in ample and slightly oversize silhouettes like the maxi light ecru trench coat paired with an orange cashmere sweater and short tangerine wool pants, the first men’s look in this show.

Fancier coats are the rose flower petal pattern inlaid on a dark camel coat with a pink knit turtleneck, white shirt, and ecru boxy pants or the dark tan laser cut and twisted leather coat again paired with a simple shirt, turtleneck, and slim pants to emphasized the dichotomy of the complex and the simple. “On the camel coat, the roses become the very structure of the coat.”

Piccioli spoke a great deal on the different mélange of garments to strike a harmony like a gold leather fringe coat worn with a mustard turtleneck and short pants or a sparkling gold paillette mock neck knit sweater with pleated pants.

In these mixtures of the everyday clothes with the heightened hand made garments lay the value, essence, and timeless of couture, made beautifully by hand in this Roman atelier.