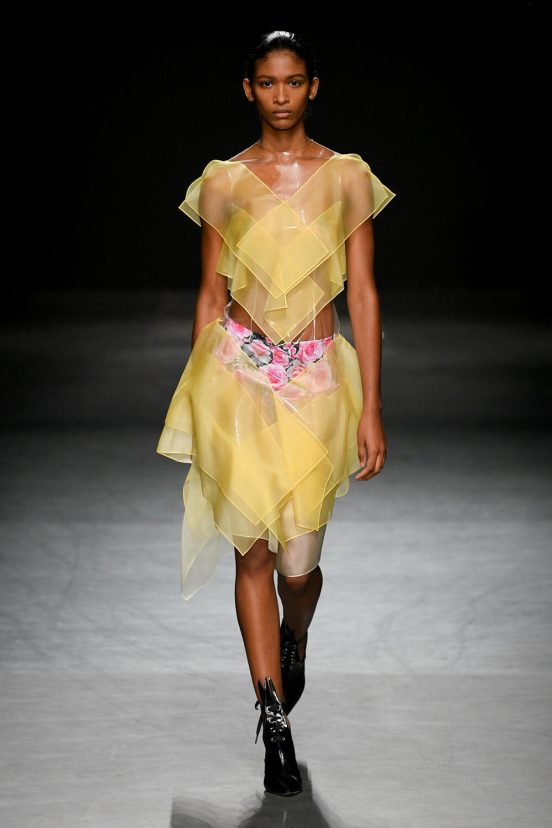 Christopher Kane took to exploring this season’s obsession with anatomy as only he can, and that was by marching to the beat of his own drum – offbeat that is.  The designers experiments with anatomy have been well documented, and throughout his career he has used his collections to explore his love of the sciences from biology to geoscience.

Today it was all about being hands-off, as in ‘Hands off our bodies’, a rallying cry that has had to be reiterated following a change in abortion laws in the US. Kane’s response was to get under the skin of the issue, quite literally, as hands – sans skin – crossed over one models reproductive organs while another set covered her bust.  As well as being a conversation starter, there is a chance we could also see them marching in a protest near you soon.

For SS23 Kane got body conscious, and utilised his collection to take a stand for women’s bodily autonomy

The way Kane uses his craft as a playground for upending fashion, means that with each piece the wearer gets more bang for their buck.  One such example was his version of the twee knitted twinset, an homage to the late Queen, Kane said “Inspiration came from the young Queen Elizabeth and Princess Margaret roaming the ground of Balmoral” with look 40 ‘a nod to her last official photograph taken in Scotland’

The classic cardigan was part engineered as a cape and fully-fashioned with a sweater, so simple but really clever – no shoulder-robing needed with this piece – and with the application of metal hardware (eyelets and dogclips) it will be the perfect gift-to-self that will work year-round.

For SS23 there was something almost coquettish in the pastel-coloured minis, and lingerie-tinged sets. Cleverly adding in elements of bondage, which because of their rendering in translucent PVC lost some of their aggressiveness without sacrificing on impact – the rib-cage constructions which held strategically placed bra cups in place, and the crewneck knit overlaid with a translucent corset will likely be seen across the red carpets and social media before the year is out.

With all the focus on emerging talent, a moment needs to be taken to appreciate the long-standing designers who have honed their craft into successful businesses – in some cases being fortunate enough to go from being acquired by a major conglomerate then back to being independent, taking back creative and financial control. And Christopher Kane is one of those designers whose brand of quirky chaos makes so much sense right now, as consumers are seeking something a little less identi-kit and more timeless, Kane offers that in spades, simply because the essence of his designs never seem tied to any particular era, yet he never fails to capture the current zeitgeist.